Pam Berkman and Dorothy Hearst are the authors of Filigree's Midnight Ride, the first in their At the Heels of History series for kids. They each have written other books, but this is their first book they've created together.

Q: How did you come up with the idea for the At the Heels of History series?

A: We were in a writing group together and we were talking about famous dogs, like Elizabeth Warren’s dogs and George Washington’s dogs. And we suddenly had the idea to tell stories about dogs in history – to tell about turning points in history from the point of view of dogs who were there. One of us said, “At the heels of history!” And that was that.

We had to make some decisions. For example, would the dogs all belong to famous people or not? Would they need to be real dogs who actually existed, or could they be characters we invented? In the end we decided to go with the solutions that would let us tell the most stories, especially stories that are less heard.

Q: You started out with Paul Revere's dog, Filigree. Why did you start with Filigree, and how did you research his story?

A: We had a list of events and time periods, with a lot of story ideas. We thought it would be good to start with Colonial America, because if you are an American, it applies to you, even if you don’t live in a former colony.

And we found out that there are many myths about Paul Revere’s ride that aren’t true. For example, he wouldn’t have shouted “The British are coming!” because he was trying to be quiet so he wouldn’t get caught by British patrols. And he wouldn’t have called the army “the British,” because the colonists considered themselves British.

So we thought it would be an interesting to tell the “real” story – though we made up Filigree! We wanted a dog that could tag along on the ride, so it had to be small. And a small dog might have been told he wasn’t big enough to make a difference. So we went from there.

Q: How do the two of you work together on the books?

A: That’s a challenge, because try as we might, we can’t read each other’s minds! So we have to have some way to show each other what we’re thinking.

When we’re beginning a book, we take huge pieces of paper and write every idea we have on them, absolutely everything, in different colors. Then we have a point system to see which ones both of us like best and want to move forward with. 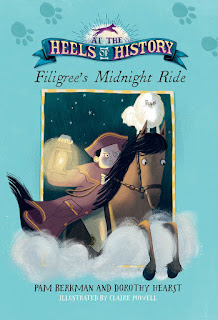 We’re different kinds of writers – one of us starts more by exploring character and situation, the other one starts more with plot and plans out the story all the way through. We try to work so that each one of us can bring our strengths to the writing.

We change our minds sometimes, though, if we feel something’s not working, and then we try again with a new idea. As we write we’re always checking in to see if what we decided is working out. We try to be very open to each other’s ideas and honest about how we feel things are working.

Q: What do you hope kids take away from the series?

For example, Filigree hates being a small dog and tries to fight like a big dog. It’s only when he learns to appreciate who he is that he finds out that being small is just what he needs. 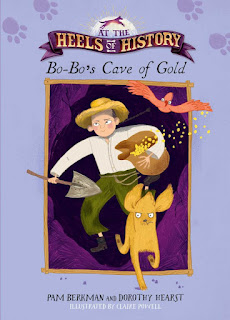 In our second book, Bo-Bo’s Cave of Gold, Bo-Bo thinks she’s weak because she cares so much about other creatures, and doing so keeps getting her in trouble. But she learns that this love for others is her strength.

Finally, we want kids to know that friendship, loyalty, and love are some of the most powerful forces in the world.

A: We are in the final stages of editing the second and third books of the series.

Bo-Bo’s Cave of Gold is set in the California Gold Rush. It’s about a golden mutt who has been exiled from her pack and who is adopted by Sheng, a boy who has come from China with his father and uncle to find gold.

When Bo-Bo frees a bear in town, its owner demands a huge price from Sheng. To save the family home, Bo-Bo and Sheng go on a treasure hunt to find a legendary cave of gold.

The third book is Minsha’s Night on Ellis Island. It’s the story of a feisty rat terrier who is left behind when her family leaves Lebanon for America in 1921. She stows away on a ship to America and befriends a boy and his family as they make their way through Ellis Island.

A: Each book has a dog hero and his or her best kid friend and a challenge that changes them both. We chose to write about dogs because dogs are about love and loyalty and family, and that’s what these books are about.

We also wanted to write about dogs because they play an amazing role in human history. They have been with us for a very long time and are the first animals to have lived with us.

And dogs are a great way to get a kid’s perspective on the world. Like kids, most of them are smaller than adults, no one listens to them, and they don’t have control over what the bigger people are doing.