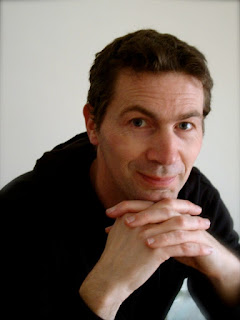 Julian Sedgwick is the author, with his brother Marcus Sedgwick, of the new young adult novel Voyages in the Underworld of Orpheus Black, a version of the Orpheus story set in World War II. His other books include Dark Satanic Mills, also written with his brother. He lives near Ely, Cambridgeshire, England.

Q: How did you and your brother come up with the idea for Voyages in the Underworld of Orpheus Black, and how did the two of you work together on the book?

A: Our last book together (Dark Satanic Mills) had been an idea that Marcus was already working on when he asked me to help. For our new project it was my turn to dig into the pile of notebooks and pull out a story.

I had two germs of ideas that I had been wanting to bring together: a modern re-telling of Orpheus, and the idea of a central character wavering between the worlds of the real and the imagined in a ravaged conflict zone.

We discussed various settings, and decided that the closing days of World War II gave us the best chance to explore the themes we wanted to write about: future warfare, the presence of an Underworld, and moral stances on conflict.

London, with both its extensive Underground and criminal underworld, gave us the landscape for Harry to drift into the world of the mythic; our own father’s conscientious objection in World War II gave us the moral stance for our central character Harry (and conflict with his brother); and the V1 and V2 rockets raining down on the city gave us the beginnings of the world of cruise missiles and sci-fi weaponry that Harry is exploring in his own work.

Once we had the setting and characters we needed to divide up the writing – and, very neatly, we had the same idea on the same day: Marcus would write a voice in verse – the lyrics of Orpheus echoing down the ages to our characters, and I would write Harry’s prose journal. It was important that both had equal weight and that they did separate tasks in the book.

Quite quickly it felt that the balance was working and we assembled the rough first draft. Then it was a matter of the usual tweaking, strengthening, editing. It was quite a tough fine edit as the book had evolved in an organic way, and keeping things nuanced and complex, yet still followable, was a matter for debate. 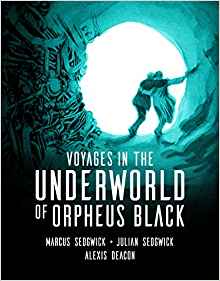 Q: The book combines prose and verse, as well as art by Alexis Deacon. How did you choose the book's form, and what do you think the art adds to the story?

A: It was always important from the start that this would be an illustrated novel. Harry’s character is a young artist  - his dreams interrupted by war – and we wanted his work to be present.

As writers, our task was to leave a sufficiently big “hole” in the draft that an artist of Alexis’s ability could use to create his own voice and chunk of the narrative. Alexis writes his own books, so we didn’t want it to be just a case of “please illustrate this”!

We might have overcomplicated things by making him a big image ref portfolio in the first draft that he then had to digest - and forget! Quickly though, Alexis found a way into the story – allowing playful and sometimes surreal use of the images whirling in Harry’s muddled and morphine-filled head.

The day I saw him talk through the pencil roughs – particularly the opening and closing sequences – gave me genuine chills down the spine. After that each iteration of the book, with wonderful art direction from the team at Walker, got stronger and stronger.

Ultimately Alexis’ third illustrative voice brings a vital, third perspective on the contents of Harry’s mind as he journeys into the Underworld.

Q: The book focuses on a relationship between two brothers--how would you describe their bond, and what was it like to write about brothers with your own brother?

A: Harry and Ellis were incredibly close as boys, but subject to the usual bitter fights and feuds as they sort to individuate from each other. Both had to find their own reaction to their upbringing and to the coming war. They both know deep down that their love transcends those differences, and that becomes clear as the book moves towards its conclusion.

In my day job as a therapist I listen to a lot of sibling conflict issues! When we were looking for the key relationship to retell the Orpheus story I think we just grabbed that one without thinking too hard about it. Which probably means we both needed to examine it. 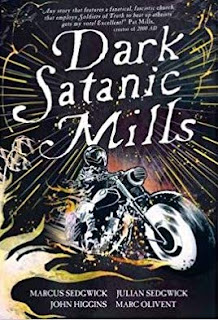 The act of writing together is always relatively easy as we both respect the other’s ability and experience. Other parts can be harder… and maybe those only became apparent towards the end of the writing process!

Q: What did you see as the right blend of the original Orpheus story and your own version?

A: This is a very good question! Every age has had its own versions of the myth. In some Orpheus rescues Eurydice, in some he fails, in some there is just Orpheus and his journey to the Underworld.

So many artists, writers and musicians – from Ancient Greece to Philip Glass – have had a go at this story, and every era has told that story in its own light. The great myths endure because they need to be told and told again, almost as if the character forces his way back into each age.

For the balance we instinctively knew that we didn’t just want to do a “substitution” retelling of the most often told version of the Orpheus myth.

It was good to keep the character of Orpheus true to the lineage, but then to play with the story and setting, referencing other versions (for example, Cocteau’s Orphée or Powell and Pressburger’s wonderful A Matter of Life and Death) – and then let the narrative flow where it wanted to go, rather than thinking “oh, we’ve got to have this bit of the myth here.”

A: I’m working on a part illustrated book again – a story set in the tsunami and post-disaster zone in Fukushima, Japan. This year I made my second research trip to the radiation exclusion zone and talked to people starting to rebuild communities on its edge.

It has been very moving and inspiring, and I’m hoping the book will come out right and do justice to the amazing stories I have heard there. I’m currently talking to possible publishers and trying to finish a new draft by Christmas.

A: Orpheus Black was the most complex and personal book I’ve worked on to date, but I’m so glad that we all persevered. It’s much easier to be proud of a book that has more than one creator!

And besides the three of us named on the cover, there were a lot of great people behind the scenes guiding this book to completion. I’m just grateful to everyone who backed Harry and his journey under wartime London skies, and helped the story to print.