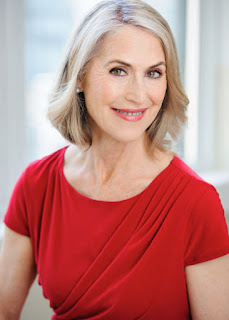 Catherine Wilson is the author of the new book How To Be an Epicurean: The Ancient Art of Living Well. Her other books include Epicureanism: A Very Short Introduction and Epicureanism at the Origins of Modernity. She is visiting presidential professor of philosophy at the Graduate Center at CUNY, and she lives in New York City.

Q: How did you first become interested in Epicureanism, and at what point did you decide to write your new book?

A: My main field of expertise is 17th and 18th century history and philosophy of science—quite remote, you might think, from ancient philosophy and certainly from self-help!

But the Epicureans, who theorized that the world was composed of atoms and void, were the most scientifically sophisticated of all the ancient philosophical schools, so I gravitated towards their writings.

I was mainly interested, from the early 1980s onwards, in the theme of subvisible reality in the Scientific Revolution, and I wrote several books and many articles on that topic.

Then, in 2003 I published a book on moral and political philosophy Moral Animals, laying out some ideas about how morality works (or should work) from a naturalistic perspective.

When I started writing specifically about Epicureanism, there was already a solid literature on Plato, Aristotle and the Stoics, and their relation to 17th century philosophy. Epicureanism was I think considered a fringe philosophy by early modern scholars.

For one thing, it was atheistic and mortalistic, and every philosopher in the 17th century put God and the immortality of the soul right in the middle of their theories. When I argued that these references weren’t always to be taken at face value, I tended to get quite a lot of stick from the critics.

I became convinced however that the rediscovery of Epicureanism (most of its important texts were lost or suppressed until the 15th century) was indispensable for understanding not only the Scientific Revolution, but also the secularization of moral theory and the rethinking of the naturalness of monarchy and aristocracy that took place in later revolutionary periods.

I wrote a specialized academic book, Epicureanism at the Origins of Modernity, then a more accessible Very Short Introduction to Epicureanism for the Oxford VSI series. 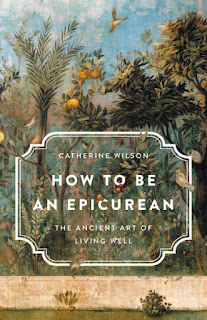 Writing my latest book, meant for a nonacademic lay audience, was a real learning experience.

I had to take my own thinking outside the usual bounds of historical and philosophical analysis. I had to formulate clear and definite ideas about a new range of topics—love, death, illness, childrearing, consumerism—and relate them to a philosophy that had taken shape back in the first few centuries BCE.

A: Many people think of Epicureanism as a lifestyle philosophy of gluttony and self-indulgence-- or maybe connoisseurship. The Epicurean is imagined as going in for expensive delicacies, fine wines, Cuban cigars, and so on.

People who know a bit more about the subject know that while the original Epicureans had no taste for such luxuries, they were nevertheless hedonists who believed that pleasure was the only human good and pain the only human evil.

But only a few readers realised that Epicureanism is a systematic “theory of everything” embracing physics, psychology, theory of knowledge, moral theory, politics, and even the history of humanity.

Hedonism in moral theory strikes most people as reductionistic and selfish. Isn’t morality basically opposed to pleasure, you might wonder, and don’t calculations of pain and pleasure infringe on human rights? But this too is a misunderstanding of how Epicurean ethics and politics really work.

The central ethical insight of the Epicureans was that avoiding harm to others as far as possible, as well minimizing harm to oneself by being prudent and foreseeing consequences, is the fundamental aim of justice.

At the same time, they realized that laws and norms are conventions and that what counts as harm changes from place to place and over time. 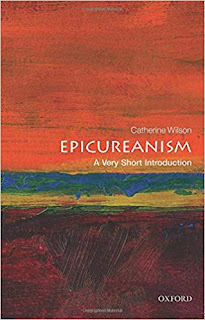 This gives us a basis for understanding what the point of ethics is and how to evaluate laws, practices, and institutions. It also helps to explain how there can be moral progress in a society as it gains in social and scientific understanding.

For example, the harms done to slaves and women in past centuries (and in recent decades, and even now) were formerly perceived as necessary and morally appropriate, and the harms done to homosexuals were often perceived as just and right. We now see things not only differently but, I believe, more objectively.

Q: What do you see as some of the most important ways people can use Epicureanism in their modern-day lives?

A: I’ll mention a few applications that I discuss in my book.

The Epicureans emphasized the notion of limits. There are psychological limits to how much pleasure we can enjoy and to how happy additional increments of wealth can make us.

Within those limits it is possible to live very well, not through constant “retail therapy,” but by indulging the senses with well-prepared food, pleasing music, by making the domestic environment visually attractive and enjoying the natural environment.

Also through friendship and the forms of love and sex that do not provoke anguish, guilt, and shame, not to mention family and legal troubles. These pleasures are less accessible to the very poor, and that is a serious moral, social, and political problem, but they do not require vast outlays of cash either.

There are also limits to life itself. There has been a lot of discussion recently about prolonging the human lifespan with chemical supplements, gene technologies, and deep freezing, and some rich people are very keen on these technologies. 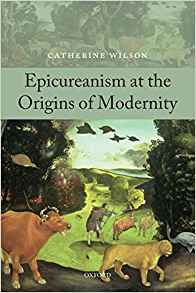 Even people who don’t go in for these technologies may demand futile medical treatments for incurable conditions for themselves or their relatives in the last months and weeks of life. They subject themselves thereby to needless suffering.

To know when to stop hoping and fighting, and when to refuse treatment for yourself or a relative requires knowledge and hard deliberation. Physicians themselves have a much more realistic view of death, but they are required to “do everything” if requested.

The Epicurean teaching on death is that it is not an evil if you have lived well, and that it is gracious as well as necessary to hand on the ‘torch of life’ to the next generation rather than clinging to it.

Q: How would you compare Epicureanism and Stoicism?

A: Stoicism sees nothing wrong with the pursuit of wealth, fame, conquest and military glory, political power, and other objects of human ambition.  It counsels its adherents at the same time to brace themselves for reversals and disappointments.

The Stoics advised suicide if one’s social position became untenable or one’s health deteriorated too far. They tried to cultivate sovereignty over all emotional reactions, including pity and grief at the death of parents, children, and friends, regarding the emotions as illnesses of the soul.

The Epicureans disdained those worldly pursuits and believed that avoiding activities that frequently led to reversals and disappointments was better than coping with them after the fact. They did not approve of war and soldiering or favor running for political office either.

The Stoics thought these attitudes were irresponsible, and you can see their point. Although Lucretius killed himself in his 40s, allegedly under the influence of a toxic love-potion, the Epicureans did not recommend suicide even for such disturbing health conditions as blindness, so long as the natural limit had not been exceeded and there was still pleasure to be had from life.

They thought mourning was the appropriate response to the loss of friends and relatives and did not regard the emotions as dangerous disturbances, with the exception of sexual jealousy, about which Lucretius wrote eloquently.

A: I am working on another academic book, this one about the 18th century philosopher Immanuel Kant, and I have some ideas for two other nonacademic books.

One, on evolutionary theory and environmentalism, is called Life According to Nature. The other, on inequality and social justice, is called Does the Meritocracy Work? All three pick up on certain Epicurean themes.

A: My aim has been to free Epicureanism from the bad reputation that it acquired already in ancient times. The three major religions—Judaism, Christianity and Islam—regarded it from the start as dangerous and subversive of all social order, and I suspect they still do.

I have tried to discuss religion reasonably sympathetically in my book. But I do make the point that, in light of the environmental crisis we are facing, and in light of the levels of immiseration and oppression that people all over the world are suffering, it is destructive to persist in seeing humanity as being under the supervision and protection of a wise and benevolent God.

This message will not be universally welcomed, but it is one of the most important take-away points of Epicureanism.