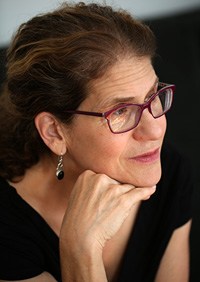 Eileen Pollack is the author of the new novel The Professor of Immortality. Her other books include A Perfect Life and Breaking and Entering. She was the director of the MFA Program in Creative Writing at the University of Michigan, and she now lives in New York City.

Q: How did you come up with the idea for The Professor of Immortality, and for your character Professor Maxine Sayers?

A: I had just moved to Ann Arbor to teach in 1994, and the Unabomber manifesto [written by Ted Kaczynski] came out in The Washington Post. Not long after, David Kaczynski and his wife went to the FBI—they recognized some of the language and the ideas. It was hard for David to turn his brother in.

The University of Michigan realized [Ted Kaczynski] got his Ph.D. in math from Michigan. If you’re a graduate student at Michigan, you have to take a course outside your area of study.

As someone teaching writing [as I did], you got to know your students well. I have had many students who were young men, were bright—and were angry. I’d always taken them as my special projects. I have a physics degree from Yale; I have an older brother who could be a handful. I’d always try to connect with them. Often, I broke through and we became close. I thought many of them were in a lot of pain.

I was interested in Kaczynski. The more I read about him, the more I began to feel for him. If I’d read the manifesto and recognized the words of a former student, would I have turned him in? I’m interested in radical action, in what shaped him.

So I had a figure of a professor who starts to suspect a former student she cares about. I was interested in the issues Kaczynski brought up in the manifesto—he was trying to alert us to the dangers of technology, of climate change. I wanted a professor who would have taught someone like Kaczynski and could speak to the same issues. At what point does action become too radical if you’re trying to save lives? I don’t think you should send bombs. 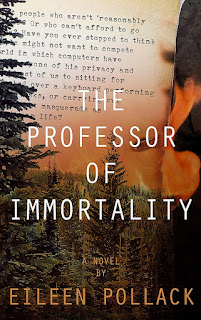 Maxine’s a professor of Future Studies. I’m interested in where the future is headed….to have a woman as a futurist really interested me. What take would she have on the future? She’s based a little on me, and a little on [professor and psychologist] Sherry Turkle.

I’m interested in the idea of human immortality. What would human life look like? How would it happen? It’s all in the book, too. Kaczynski became Kaczynski because he was so lonely he snapped. Now we call these people incels.

Q: How closely is the Technobomber in your book modeled on the Unabomber? What did you see as the right blend of fiction and history as you wrote the novel?

A: Most of the biographical details of his childhood and young adulthood were drawn from Kaczynski’s biography. There are some touching details. I kept those but changed what was needed for the plot. It’s set later, so the timeline is different. I made changes because I didn’t want the ending to be a foregone conclusion.

A: I read about Kaczynski. I read about future technology, futurism, immortality studies. I did research on the legal aspects—once Maxine goes to the FBI and sets in motion the search for her former student, I wanted to get that right. I got into the FBI in Detroit. When you’re writing fiction, people like police, law enforcement, are so eager to talk to you. 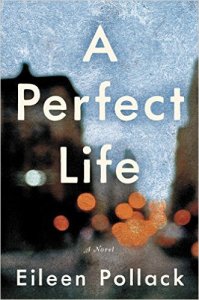 Some of it came from having taught for 25 years. I didn’t have to research that!

Q: You’ve talked about technology--what role do you see it playing in the book, and what do you hope readers take away from the story?

A: I want them to think about who is making the future for us. Straight white young men are designing technology for us…I wanted people to think about it from a woman’s point of view.

I wanted people to think about lonely angry young white guys. They might just be trolling on the internet, but now they could be shooting up [somewhere]. Kaczynski’s ideology came afterward. He wanted to kill people, and he needed an ideology to justify that.

It's easy to say incels are horrible rather than ask why they feel the way they do. There’s not an obligation to placate them, but pain is pain, loneliness is loneliness. Some of the white supremacist ideology is primary, but some is because the ideology is vilified. It might behoove us to think what’s really going on there.

I’m interested in young people and how they think. In our generation we’ve noticed changes [with technology] in our lives, but my students grew up in that technology. They’re funny, wise, caring, but often dismissed as not as good as the generation before them. 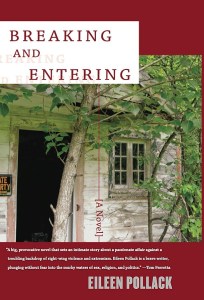 A: I took a break. I left Michigan. I’m now a professor emeritus. I moved to New York—I wanted to shake things up. I’m living in Manhattan.

I’m interested in how older women are portrayed in society and fiction—I’m writing some stories about that, about growing older, sex, romance. Some of the stories are pretty brave.

A: I got to Michigan in ’94. Timothy McVeigh blew up the Murrah office building in Oklahoma City [in 1995]. He was connected to the Michigan militia.

I have written a novel, Breaking and Entering, that asked how in one city, state, or country, people with radically different views could get along. People in New York said, What century are you living in?

Now that book makes a lot of sense. I’ve been writing about domestic terrorism for a long time. I’m hoping people go back to Breaking and Entering.

This is something I’ve worked on since 1994. I had a hard time finding people to connect with it. Now it’s really relevant.

--Interview with Deborah Kalb. Here's a previous Q&A with Eileen Pollack.
Posted by Deborah Kalb at 7:11 AM