Mark Bergin is the author of the new novel Apprehension. He spent nearly 30 years as a police officer in Alexandria, Virginia, and worked as a reporter before that. He lives in Alexandria and in Kitty Hawk, North Carolina.

Q: You note that you had the idea for this book 30 years ago. How did it change over the years?

A: I had been thinking of the book, and writing scenes for it all those years, but a big part changed when I had kids.

In the original version, my hero's daughter was murdered in front of him. When I actually had a daughter and son, I learned that I could not write that scene, because my hero would not have survived it to go on and experience the events of the novel. So I killed his niece instead. Still impactful, but not so much that he could not go on.

Q: How did you come up with your character John Kelly, and how much did your own experience as a police officer inspire his creation?

A: I was never a detective, but as an officer in Alexandria we conducted every preliminary investigation, and could follow up on cases if staffing and our sergeants let us. Detectives are just cops who don't have to answer radio calls, and have time to follow leads and conduct interviews. 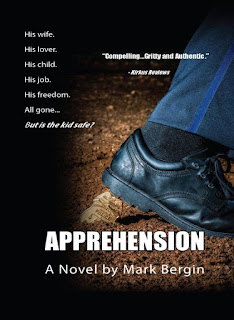 Kelly was a creation of plot: I started with ideas about what kind of stress I could pile onto a good cop, and Kelly was what survived my dropping rocks on his head for four days. The book is certainly based on my 28 years as an officer, sergeant, and lieutenant, and on my four years as a newspaper reporter prior.

Everything in the book is possible. Some of it actually happened. The witch doctor bit is true. The magnets are something we joked about, but never did.

Q: The novel focuses on police suicide, and you're donating book profits to many organizations including the National Police Suicide Foundation. Why did you choose this as the theme?

A: In 2013, when I had two career-ending heart attacks, I actually died. En route to my eventual double bypass operation a nurse looked at me and said, "You're not supposed to be here any more. God's got something more for you to do here."

I'm not sure that comports with my view of God, but I thought about it. So when the time came to find something other than police work to fill my day, I decided to finally write the book, but to make it do more good than just to satisfy my ego.

Law enforcement suicide is a major problem but both unrecognized outside of our profession and under-acknowledged inside. So I shifted the story around to put even more pressure on my hero, John Kelly, and bring him to the edge of suicide. Maybe beyond?

In my time as a cop in Alexandria, Virginia, one fellow officer was killed in a shooting. But three took their own lives, as well as two deputy sheriffs on our sister agency. Five to one. More law enforcement members die by their own hand than are killed in the line of duty. Ours was a higher ratio than is common but not unusually so.

I wanted to write a book that highlighted the pressures on cops and the problems stress creates. I thought maybe the book could be a conversation starter among officers about suicide. We don't talk about it much, or enough. There is as strong a stigma on suicide in police work as anywhere, maybe stronger because cops are expected to be tough and capable all the time.

A: Beyond just a ripping yarn, I wrote it with the idea that readers could learn about cops and what they think and go through every day. I wrote it so that cops could read it and recognize some of their own feelings and experiences, and maybe they could give it to family members and say, "This is how it is out there."

After I retired, I found out how scared my family was for me working on the street. I never discussed it with them because I didn't want to upset them. They never brought it up with me to spare me being concerned for them. Lousy way to spend years but it happened.

A: The second book in the series (I have outlines for four more) will be about faith, God, religion, belief, and armed robbery. My hero Kelly will survive a shooting that should have killed him, in a way that other people say could only show the hand of God saved him. He struggles to understand this, while working a child abuse case.

I find that writing one book gives me ideas that don't fit in the current work but could live in a future book, so I keep notes and file them into, say, book three where Kelly travels to Ireland chasing a killer he let escape (based on a trip I made recently and discovered a perfect cave for several scenes,) book four wherein he suffers a heart attack, and book five in which Kelly, now retired, is drawn into a racially-charged murder in an angry and divided city at the request of a journalist.

A: At the end of the day, books should entertain as well as provoke and educate. I hope Apprehension and its successors are enjoyable and exciting.