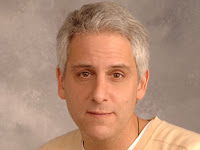 Chip Jacobs is the author of the new novel Arroyo. His other books include Strange As It Seems and Smogtown, and his work has appeared in a variety of publications, including the Los Angeles Times and The New York Times. He lives in Southern California.

Q: How did you come up with the idea for Arroyo?

A: Growing up in Pasadena, everyone called the Colorado Street Bridge “Suicide Bridge” and talked about its dark folklore, including the rumors the deck was inhabited by ghosts.

As a teenager attending a rowdy all-boys prep school, I paid that little mind. What I cared about was that the area around this famous/infamous bridge was an ideal place to party and cause mischief. Indeed, I got into a rather embarrassing car accident there as a high school senior (don’t ask — I told my father a whopper about it, and thankfully the insurance company never heard.)

Twenty-plus years later, as I transitioned from being a newspaper reporter to an author, I freelanced a feature story about this horrific, and pretty much forgotten 1913 construction accident that convulsed the bridge during the headlong rush to finish it on time for an impatient city. I found myself incensed that the workers who made the ultimate sacrifice were ignored in Pasadena’s otherwise glorious history. 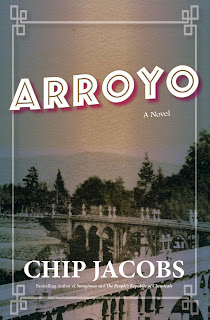 Little did I know the story would get around, and soon I was being sought out by readers, a pair of dubious documentary makers and even a British reality-TV psychic to elaborate on what I’d learned. I guess all that resonated in my psyche so when I decided to go into fiction, the subject was a natural: the bridge!

Q: What kind of research did you do to write the book, which is set in two very different time periods?

A: Going back to my grad-school days, I was always an over-researcher. You could call it curiosity, a hunger to learn, or, alternatively, the procrastinator’s defense mechanism. I mean, why put off (as in writing) today, what you can delay tomorrow.

To answer your question, I probably devoted half a year to digging into the true story of the often-whitewashed tale of the bridge’s inception.

My fluorescent tan came from endless hours in the subterranean stacks at the Pasadena Museum of History, and at the dizzying microfiche machine and special collections at the Pasadena Central Library. I burrowed into the archives of now-defunct newspapers that actually wrote more about the nitty-gritty of the bridge during its construction than the Los Angeles Times or bigger publications. 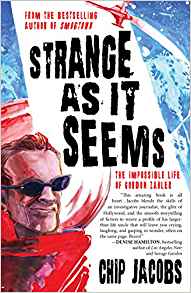 In the end, I amassed a four-inch binder of clipped articles, magazine journals and dusty letters (including one from the bridge designer so outraged that city hall modified his blueprints he boycotted the structure’s pomp-filled ribbon cutting).

Interviews with local historians were instrumental, as were the 20-odd books I devoured. One, an encylopedia-sized journal penned for an old-time Pasadena pharmacist/writer, was an absolute goldmine of anecdotes and facts whitewashed out of the city’s official history. I was so lucky to find it.

Q: As you mentioned, the novel takes place in Pasadena. How important are setting and location to you in your writing?

A: The setting was everything, because the bridge plays rotating roles — femme fatale, victim, civic aspiration, concrete queen whose name had been smeared — in my book.

And Pasadena herself is a giant character, as my anti-hero protagonist, Nick Chance, in his first life here in the quixotic Progressive Age, is a dedicated homer who believes his hometown is incapable of vice.

I wanted to transport readers (and myself) into this romantic time of literary salons, Busch Gardens, ostrich farms, fancy hotels, mountain railways, and the optimistic spirit that a can-do attitude coupled with inventions could engender a better planet. 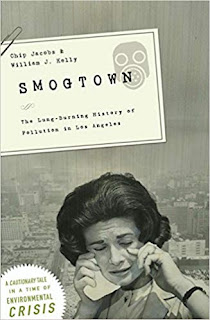 And what’s a historical novel without some sweet tablespoons of history. If you’re ever fatigued by city life, just Google early Pasadena to breathe in the green vapors of a wondrous era.

A: That’s a multi-part question. If I don’t make them chuckle, wince, utter a few “oh I get it(s)” and tear up, I haven’t done my job.

Arroyo is intended to lay out a hypothesis for how beauty can blind, how some objects forged with man’s lessor angels can ricochet to future generations.

It’s also supposed to be a back-in-time romp, where a 20-something dreamer and his sometimes mind-reading dog get themselves in all sorts of trouble in service to a bigger point: we get the heaven we deserve.

Sometimes that means denouncing the worst traits of something—or somewhere—to which are hearts are bound.

A: I’m at the beginning stages of a follow up novel based on a real-life incident in which a brilliant, opinionated and dying friend asked me to compose an apology letter to the most bullied kid from our high school. Some of the themes from Arroyo will pop up (in weird ways), and the bridge herself could make a cameo.

I’m also at work on a non-fiction book I’m not allowed to talk about, and trying to get my co-authored social history on the “great” L.A. smog crisis turned into either a film or series.

A: That the dog you might believe only cares about his dinner, chasing squirrels and receiving ear rubs may be the wisest soul under your roof.