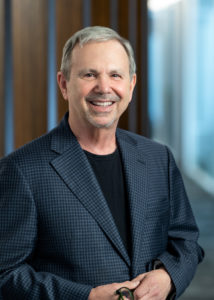 Marc Grossberg is the author of the new novel The Best People, which takes place in the Houston legal world. He has practiced law for more than 50 years, and he lives in Houston.

Q: How did you come up with the idea for The Best People, and for your character Paddy?

A: I was at a family event at a Marriott in Houston and went to the bathroom. I heard female voices. At first I thought they came through the vent but then I realized I was in the women’s restroom. Not wanting to be thought of as a pervert, I made an anxious, stealth departure.

Then, I wondered what if someone heard a conversation they weren’t supposed to hear in a place where the speakers thought they had privacy. Although that scene doesn’t come until late in the book, the entire plot spun from that.

Q: What impact has your legal career had on your fiction writing?

A: It certainly slowed me down. I used to work very long hours. The first draft of The Best People was written in 1996. Got that? Twenty-three years in the making. I didn’t really devote important time to making it a pretty good book until 2009 and by that time I was 68.

On the other hand, of course, it provided me with a way to invite readers into the world of law and lawyers. My hope is to capture some portions of them in a way that will entertain and inform. 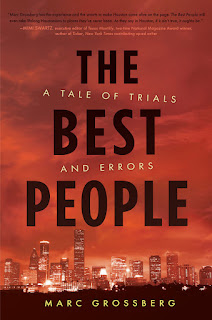 Q: The novel takes place in Houston--how important is setting to you in your writing?

A: I could answer that in one word – “totally.” Houston is the greatest meritocracy I know of. It is the most diverse city in the United States. It is exciting and interesting. It is and always has been a “can do” place, where too good to be true hasn’t stopped success.

We’ve produced some amazingly wonderful and terrible over-the-top people. It is wide open for people to succeed and fail in whatever drives their passion or their greed or their desire for recognition and respect.

A: That they had a fun yet contemplative time reading about how an overwhelming desire for recognition and respect can conflict with one’s sense of right and wrong, that Houston is an amazing place that produces larger than life characters, and that everyone has a chance to achieve their goals.

A: A second novel, which is a cold case murder mystery set in Houston and loosely based on real events, tuning up some short stories, a play about Thurgood Marshall and Jack Greenberg, and mostly a long personal essay about Going Where My Green Light Tells Me the Intersection Might be Interesting, Living in the NOW, and accepting the consequences of all the choices you have made as you move forward.

People who have read The Best People tell me they are expecting a sequel because they love Paddy Moran, the main character.  Who knows?

A: I’m a really happy person. My oldest daughter calls me Benjamin Button because she thinks I’m getting younger. Like Dylan wrote in My Back Pages, “I was so much older then. I’m younger than that now.”

I feel truly fortunate to have a loving family, good friends, good health, no responsibilities that I don’t consciously choose to assume, no entangling, troubled relationships and the absurd absolute conviction that it isn’t too late for me to do anything.