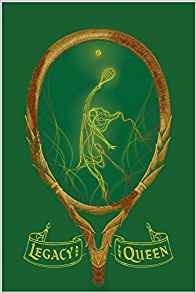 Annie Matthew is the author of Legacy and the Queen, a new middle grade novel for kids. The concept for the book was created by former NBA basketball star Kobe Bryant. Matthew is a novelist and poet, and also a former professional squash player. She lives in Iowa.

Q: How did you end up working on Legacy and the Queen with Kobe Bryant?

A: My oldest and dearest friend, Ivy Claire, was working with Kobe on a novel of her own (the brilliant, forthcoming first installment of the Epoca series, The Tree of Ecrof).

He asked Ivy if she had any recommendations for novelists who would be interested in writing a series about about a young, female tennis player with magical powers, and she recommended me.

Ivy and I happened to grow up playing sports at a professional level together, and I followed her into a career as a writer, so she knew I'd be a good fit.

Q: What role did each of you play in creating the book?

A: By the time I came on board, Kobe had already imagined the whole world of Nova. He had character sketches in mind, and a plot outline, and incredibly detailed ideas about the various stringing minerals would work to channel the kids' emotions.

My job as a writer was to bring his sketches to life. In the beginning, as I was writing early drafts, we talked almost every day about the direction the story was taking. And every day, I was inspired again by the vast expanse of his vision.

It's incredible to me that a man embarking on a second career--especially after the success of his first one--would have as much creative energy as Kobe does.

A: The main thing Kobe and I wanted kids to take away from this story was the understanding that in order to be the best versions of ourselves, we have to understand and embrace all our different sides.

For both me and Kobe, it was important that young female athletes--and young women in general--be encouraged not only to be “nice” and “good” and “polite,” but to embrace their ambition, their ferocity, even their anger.

Growing up as a girl playing sports, I always felt torn between our cultural insistence that girls should be nice, and the necessity as an athlete that I should be tough.

I wanted to make it clear the only way Legacy can access her greatness--and the best way she can serve the community she loves--is by embracing her ferocity, and her anger about injustice in Nova.

Q: Do you think the book will get more kids interested in tennis?

A: I hope so! Both Kobe and I are huge fans of tennis, and I spent a lot of time studying the techniques of great players as I was writing the book's tennis scenes.  It's a beautiful sport that requires extraordinary skill and grace and intelligence.

A: I am currently working on the second book of the Legacy series, which should be coming out soon!