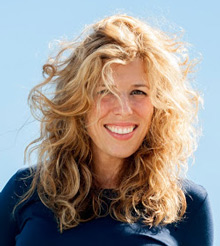 Melissa Falcon Field is the author of the novel What Burns Away. Her work has appeared in a variety of publications, including The Hartford Courant and The Maine Scholar, and she lives in Madison, Wisconsin.

Q: How did you come up with your main character, Claire?

A: Claire was invented through my own search for balance and normalcy, as a new mother, as a person dislocated by a move, and as a woman at the onset of middle age.

I wanted to write a character in that mid-life space, still haunted by the tragedies of her youth, which in Claire’s case, different from my own, she invites that past back into her future.

The book is in many ways a study of a marriage, and for Claire that means thinking about the ways two people can live together and fall away from each other, and all the parallel myths of what it means to give up a career and a past to become mother and wife.

It is this awareness that I was interested in as subject matter. There is something about remaking yourself inside of a frayed relationship at mid-life, in terms of how to re-establish desire and sexuality, that interests me.

For Claire, this space is both freeing, disappointing, and as she moves through it, destructive. I had hoped that by weaving Claire’s past tense story with the problems of the present, I could present readers with an emotionally complicated twist in a moment where her past and present intersect. 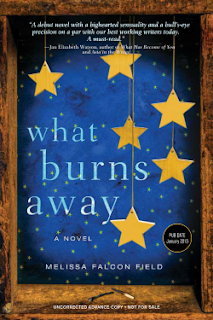 Q: Fire is a theme that runs throughout the novel. Why did you choose that, and what does the book's title signify for you?

A: For some reason, though I was never a science buff in school, science has made its way into my work, both this novel and the one I am currently finishing.

In What Burns Away, I chose fire because we all know it as a thing both literal and metaphoric. Too, I had worked closely in my years as a public schoolteacher with a teenage arsonist, so I knew a little bit about the emotional terrain and rational of firebugs.

With that knowledge, I worked hard to create a fictional character with a solid grasp on chemistry, who could be lured by fire through the hauntings of her “old flame” Dean, who serves again as both a literal and figurative accelerant for Claire.

To research the theme of fire running through the novel, I did some hands on investigations. I made flame-throwers out of aerosol cans and burnt Ping-Pong balls in my back yard, to better understand Claire’s draw to those flames. Reading Michael Faraday’s lecture series from the Royal Academy of London also helped me add layers to Claire’s story.

So, that said, the title needed to reflect the act and thrill of making fires, but also reference the shifting through the ashes when fires literally and figuratively burn out, which is how my wonderful editor, Shana Drehs, and I arrived at "What Burns Away," together.

Q: The book's two settings, in Connecticut and Wisconsin, are so important to Claire and to the novel overall. How did you choose those particular locations, and how crucial is setting to your writing?

A: I’m an East Coast girl, and although I have lived all over the country, and away from it more than half of my life, there’s never been a day without the Atlantic at my side that I haven't longed for it.

When my husband and I moved to the Midwest four years ago, I thought, There are lakes there, water is water; I’ll stop missing home.

But what I’ve learned living in Madison, Wisconsin, which I have grown to really love, is how differently weather patterns move across a lake when compared to an ocean, and how lake-effect snow in my husband’s hometown of Cleveland, Ohio, lasts longer and drifts in ways comparable to sand dunes.

For me, everything is about place—place is the belly of the character we all occupy. And so I made a study of the unforgiving winters of Claire’s New England past and her Midwestern present.

Each location is spectacular in the severity of its winter storms, but the displays of those storms and their meltings happen differently, making each of those two settings, isolated and bitter, stages ripe for Claire’s undoing.

And ultimately it was my interest and fascination with the difference between those two region’s weather patterns that led to my choosing climatology as Claire’s career.

A: I never know where I am going when I write the first draft. That, for me, is the joy in the work, winding my way through the narrative to arrive at a destination I never expected.

I love chasing the story, my imagination welling, which is the very reason I get into the chair each morning and take a trip with the characters that have come along and invited me to join them.

Q: What books have inspired your writing?

A: Growing up, the reading materials at my house consisted not of books, but rather the backs of cereal boxes, Fruity Pebbles, Cocoa Puffs, Cap'n Crunch, sometimes my mother’s People magazines, and my father’s how-to guides.

We lived in Hartford, Connecticut, in the late 1970s through the mid-1980s, and during those years I had never heard much about books or the writing of them, until my teachers at Kennelly Elementary School began to encourage me to go to the Southwest Branch of the Hartford Public Library after school, Goodwin Memorial.

The librarian there was my mother’s age, my age now, cresting 40, smart and edgy with an angular haircut and great, big blue Sally Jesse Raphael-style glasses. She taught me how to use the Dewey Decimal System and the card catalogue, and encouraged me to read furiously into the night, every book I could find.

In my childhood time with her, I read obsessively about Halley’s comet, which all these years later had made its way into What Burns Away.

And I suppose that it was that beloved librarian that first introduced me to…writers I still love to read over and over again—Harriet Beecher Stowe, Mark Twain, Wally Lamb, to name a few.

But honestly, really every book I’ve read and re-read inspires me.  I can’t read enough. I would read all day if I could, poems and fiction and nonfiction, too. I love memoir as much as fiction and hope to write one some day.

Also, I don't have cable television at home, so that, instead, I read. Recently the fiction I have read includes Judith Claire Mitchell’s beautiful A Reunion of Ghosts, which I loved; the co-authored novel War of the Encyclopaedists by Gavin Kovite and Christopher Robinson, which everyone should go and buy and read right now; Station Eleven by Emily St. John Mandel, which I read in a single fabulous sitting; The Suicide of Claire Bishop by Carmiel Banasky which is daring and gorgeous, the exqiuitely quirky collection of short stories How Gone we Got by Dina Guidubaldi; and currently, I’m devouring Fates and Furies by the brilliant Lauren Groff, a book I will pick up again the minute I finish this sentence.

A: I am currently working on a second novel about a series of accidents that intimately connects the lives of four strangers. The book studies the intersections of superstition, grief and desire, and how each of these four characters’ stories embraces a series of sequestered lies.

The falsehoods and omissions are lies told to protect their loved ones from truths that would crush them, which ultimately reveal themselves through a kind of foredooming that connects all four of these people and their fate.

The book takes place on a fictional island off the coast of Maine, outside of Portland, where I used to live. A place I love and return to every summer. It’s a mystery of sorts, and I just finished the first full draft this week.

This new book is made of redemption and reprisal, alongside the shame and forgiveness triggered by the lies we tell each other and ourselves.