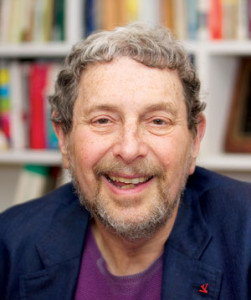 Paul Steinberg is the author of the new book A Salamander's Tale: My Story of Regeneration--Surviving 30 Years with Prostate Cancer. His writing has appeared in a variety of publications, including The New York Times and The Washington Post. He is a psychiatrist, and he lives in Washington, D.C.

Q: Why did you decide to write this book about your experiences?

A: Men don’t usually talk about prostate cancer. It’s got the potential for humor; it’s more than Kafkaesque. We ordinarily aren’t as forthcoming as women are about breast cancer or ovarian cancer. It’s about time we talk about what we’re up against and our wives and partners are up against.

Q: What reactions have there been to the book?

A: One reviewer called it raw, funny, profane, and uplifting. Those are great adjectives.

Q: As a doctor, how was your reaction to your oncologists’ ideas perhaps different from those of other patients?

A: There’s no question I had to challenge [their views]. In 1989, five years after the original surgery—no one knew what PSA meant at that point.

I was told my PSA had gone up, and that indicated I had metastatic disease, and [was told I would need] surgical castration. I said, Over my dead body. Being a doctor helped me talk the talk, and play into their own healthy narcissism. 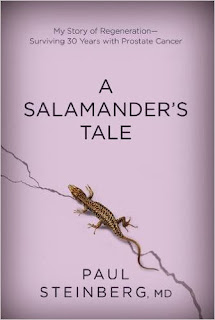 Q: You write, “My cancer is me, and my cancer is not me.” Can you say more about that, and how you perceive the cancer you’ve lived with for many years?

A: It hasn’t defined me—even though the book sort of defines me that way. I’m living a full, rich life despite cancer. As I point out, the salamander can sit under a rock while it regenerates its leg, its tail…we can’t. I wasn’t sitting under a log, I was living my life, but was very focused on how to find a way to live a rich, full life.

A: It signified to me my own regeneration, and efforts to recover from the surgery to my prostate. The prostate area has more nerve cells than any other area than the brain. It’s why women often point out that men’s brains are in their penises…The salamander was my inspiration [in my efforts to] regenerate myself.

Q: To what do you attribute your lengthy survival?

A: Most of it is good luck, and just persevering, trying to find the right people. I could probably make a case that changing my diet helped, but probably I should have done that when I was a kid…Mostly it’s perseverance, challenging authority, questioning things, finding a solution for the metastatic disease that didn’t mean permanent surgical castration.

Q: Was it difficult to write this book and go over difficult times in your life?

A: It wasn’t. I enjoyed it—it was a lot of fun. When I first started writing it, 10 or 12 years ago, I realized I had something valuable to say, and [wrote] op-eds for The New York Times, The Washington Post, the Los Angeles Times, various places…it’s very gratifying.

Q: Who do you see as the audience for the book?

A: This may be crazy, but I see anyone and everyone as a possible audience. Prostate cancer is not on everyone’s minds, but I think women have responded to the book more than men. It can be an inspiration for anyone struggling with a loss or a blow.

A: I’m working on a couple of things. I want to create some op-ed and magazine pieces as well.

--Interview with Deborah Kalb. Paul Steinberg will be participating in the Hyman S. and Freda Bernstein Jewish Literary Festival at the Washington DCJCC, which runs from October 18-28, 2015.
Posted by Deborah Kalb at 8:44 AM