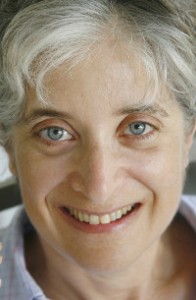 Leah Lax is the author of the new memoir Uncovered: How I Left Hasidic Life and Finally Came Home. She also has written The Mikvah Project. Her work has appeared in a variety of publications, including Lilith and Salon.

Q: Why did you decide to write a memoir about your experiences in the Hasidic world?

A: My story was intruding on everything I wrote, creeping into my fiction, distracting me from projects. I knew that no other gay person had ever spoken out from the Hasidic community, almost never from any fundamentalist community, and that pushed me.

Q: In the book, you describe your turning toward—and then, after many years, away from—Hasidism. What were some of the most important factors drawing you toward the Hasidic community, and what eventually pulled you away?

A: The first is a secret about fundamentalist communities with strict gender roles: they’re (psst) homoerotic. Men congregate with men, pray and sing together arm-in-arm, and among the Hasidim at least, they dance and embrace. The women hover close together, whisper in one another’s ears, enter each other’s intimate spaces to share daily burdens.

Besides, the Hasidim were offering structure and a sense of belonging to a young teen from a less-than-stellar home—and the promise of eternal love.

Here are two reasons out of many as to why I left (without giving away the book): I felt Hasidic education was robbing my children of their adolescence—that time of questioning, exploring, breaking rules, none of which they were allowed. But ultimately, of course, the Hasidic community is no place for a lesbian… 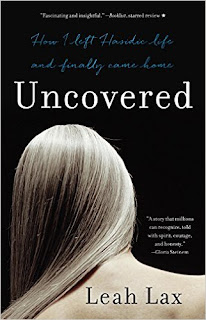 Q: How hard was it to revisit some very difficult times in your life?

A: As hard as was necessary to get an emotionally honest story. Writing memoir is self-hypnosis; I had to put myself into that past event until the sense of the moment was so vivid I could remember colors and smells and peripheral sound. If the scene was a difficult one, there were times I paced, or sobbed.

But there was also the older wiser self who tempered the memory and could unearth humor, or forgotten kindness.

A: I went to a tiny writers’ retreat for women and at dinner the first night, I sat down next to Gloria Steinem (!). I found her kind and generous, and she took an interest in my work. We had nighttime conversations, long walks. One evening she said, “I thought of a title for your book. Uncovered.”

A series of personal essays about current events from the standpoint of a woman who once lived a fundamentalist life--about marriage, abortion, even fashion freedom.

But I’m trying to get back to working on my novel, about a fictional community in Houston, a collection point for immigrant families. A cult grows up among them.

A: I’m a chamber music geek and I play cello. We have a goofy Airedale named Gracie.

--Interview with Deborah Kalb. Leah Lax will be participating in The Lessans Family Annual Book Festival at the JCC of Greater Washington, which runs from Nov. 5-15, 2015.