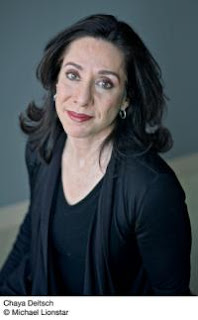 Chaya Deitsch is the author of the new memoir Here and There: Leaving Hasidism, Keeping My Family. She has worked at Viking Penguin and Little, Brown, and is now a financial writer. She lives in New York City.

A: I had never planned to write a memoir at all – I’m actually a pretty private person. My original intention had been to write a history of my family’s incredible life and travels as Lubavitcher Hasidim in Russia during and before World War II.

Stories from “over there” were part of my DNA growing up, and I was fascinated. But I discovered that when I tried to convey some of the drama and heart of those stories on the page, they felt flat and lifeless.

All along, I’d been work shopping some of my pieces in writing groups around New York, and got the strongest reactions from scenes that had to do with me and how I fit into the picture. So without even realizing it, the books began taking shape as a memoir until it was too late!

Q: You write that "there has never been a sharp break with my family and their world." How have you been able to reconcile your different beliefs and practices?

A: It’s interesting, because I’ve now been secular for nearly twice as long as I was Hasidic, yet I’m as separate from the practice of Judaism as I ever was, and my family’s religious commitment certainly hasn’t weakened over the years. So my parents and I have never found a “middle ground” on belief. 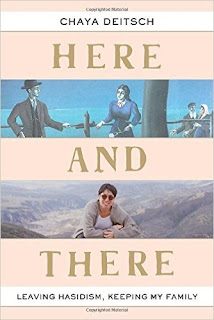 That said, we’ve managed to work around our religious differences, and build a relationship based on respect, love and, at times, a high tolerance for discomfort.

I’m careful not to be “in your face” with my trayf life – for example, I always wear a skirt when I see them – but I try to share almost everything else with them, which is surprisingly a lot.

My parents get most of the credit here, of course. The idea of “banishment” was never even on the table. Ultimately, it was their desire to keep me close, despite the fact that they didn’t approve of my choices, that kept our relationship going. That was particularly true in the early days of my “straying.”

Q: You describe your life in your 20s and 30s as being "at the center of a Venn diagram." How difficult was it to live that way, and was it hard to relive your struggles with religion as you wrote the book?

A: My late 20s and early 30s were probably the hardest, in terms of my relationships both with my parents and my friends/significant others.

At that point, the thrill of graduating college and living on my own in New York was starting to normalize, and I was really chafing at living this double life. I felt a lot a guilt about what I believed I had inflicted on my family.

At the same time, there was a lot of lying going on (by me) – I write in the book about changing shrimp dinners to pu pu platters at Moshe Peking – but each time I did it, I got this sinking feeling in my stomach, like I had once again failed to “man up” and tell my parents the truth. And to be honest, they didn’t really want to know.

The problem, of course, is that you can end up floating in between two worlds without a claim on either one.

Reliving certain parts of my life in my writing definitely made sad, but it was less about my struggles with religion than remembering those feelings of being completely alone with my desire for this subversive life.  And fear – I had no idea what the other side looked like.

In that way, I hope the book can provide some reassurance to younger people who are afraid to try something different from what they’ve always. You’ll find that you’re surprisingly resilient, as are – in most cases – the people you love.

A: It’s a mixed bag. My sisters have been great. Both of my parents have been supportive, but my mother has been a little more anxious about the response of the community and other relatives.

I totally understand. There are a lot of misconceptions about Hasidim out there, including a tendency to think of them as one-dimensional instead of as real people.

And even though my story is ultimately a loving one, I do level some criticism and anger at the tradition, particularly about how women are treated.

My father, by the way, is fine with the book—he just wants to it to be a success!

A: I’m actually returning to the family stories that were the original impetus for this memoir.

I was very inspired by Daniel Mendelsohn’s book The Lost, about his search to learn about family members killed in the Holocaust. He does such a skillful job of twining his own experience with the stories of relatives he’d never met but who’d had a big impact on his sense of identity….Fiction is another option for trying to vitalize these stories in my head.

--Interview with Deborah Kalb. Chaya Deitsch will be participating in The Lessans Family Annual Book Festival at the JCC of Greater Washington, which runs from November 5-15, 2015.