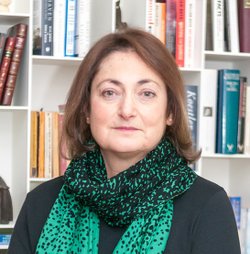 My mother always discounted Nellie’s stories, saying she was a fantasist, was probably mistaken about the family ever actually owning the building and we should look to the future, not the past. I had a very different attitude. Yes, Nellie might have been wrong but perhaps she wasn’t. I absolutely had to find out! 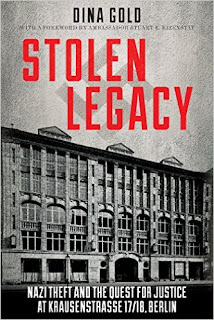 Restitution of Holocaust-era assets is now a live issue. The Holocaust was an unforgiveable act of genocide. But it was also the largest instance of organized looting, particularly of Jewish property, in history.

Stealing was a central part of the Nazis’ war effort. All over Europe, there are still formerly Jewish-owned land and buildings which were seized by the Nazis, and often then taken over by the Communist regimes which followed, which have never been returned to their rightful owners or their heirs.

Only last week a new coalition, the European Alliance for Holocaust Survivors, was formed in Brussels at the initiative of the World Jewish Restitution Organization (WJRO). Its purpose is to now try and reclaim Jewish properties in all countries, other than Germany and Austria, seized during the Holocaust.

Thirty-six members of the European Parliament have urged Parliament President Martin Schulz to focus on the need to restitute Holocaust-era property. 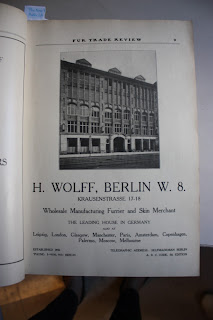 A charming fresh revelation has emerged about the long-lost glorious Berlin fashion house H. Wolff, which my great-grandfather operated from Krausenstrasse 17/18.

I was in the New York Public Library recently and discovered some old editions of a publication called “Fur Trade Review.” I looked at three years’ worth – from 1908-1910. This magazine is no longer published, but these issues offer a vivid portrayal of the once vibrant fur trade that flourished across North America in the early part of the last century. European dealers would visit the United States and establish business links here.

To my amazement I found many H. Wolff advertisements and photos of my great-grandfather’s latest designs all through the magazines…not only coats but also stoles, muffs, hats and assorted accessories – all made from fur. And I discovered that Victor Wolff’s Berlin telegraphic address, all those years ago, was “SELFMADEMAN.” 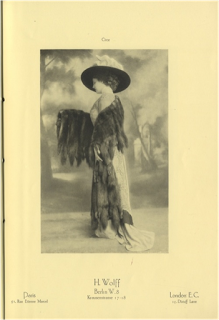 I had brought all the case papers over. Simon said “the children need to know their family history, so sit down and write,” and that is what I did. A friend, who is a literary agent, kept asking me to show her my draft.  She really liked the story. And that is how ABA’s new imprint, Ankerwycke Books, came to publish Stolen Legacy.

I found a very prestigious German university with a Stiftung (foundation) named after the chairman of the insurance company that foreclosed on the building in 1937. The mortgage had been withdrawn and the building handed straight to the Reichsbahn. I have found out what an inglorious past this man had. Two years ago I contacted the university for an explanation…

Things are moving there. The president of that university has personally been in touch to inform me he has called a full board meeting to discuss what should be done. I await a decision. If there are any new developments I will post them on my website.

I cannot understand why not. Is there anyone reading this who can put pressure on the German authorities to get their act together? It is a disgrace that they are ignoring my pleas. What are they waiting for? I have copies of all the correspondence.

The last person I heard from was Lutz Lange of the Bundesanstalt für Immobilienaufgaben (the Federal Authority for Real Estate) the body now responsible for the building. On August 21, 2014, he wrote me saying he had received my request “to put a (memorial) plaque on the building” and “We will review your request and inform you as soon as we have new information available.”  How long does it take? I am not going to go away!

Will there be a German-language edition of Stolen Legacy? I wish. I have had e-mails from people in Germany asking me when it will be available in their native language and I am afraid that I have no good answer. It is up to a German publisher to snap it up. My publisher and I are waiting to hear from anyone who is interested!

And will there be a movie? The BBC has contacted me from London asking me if they could make a documentary with me, but so far no feature film producer. Again – I am happy to hear from anyone. Someone wrote in an online Amazon review that I am the Erin Brockovich of Holocaust restitution. That has a certain ring to it!

--Interview with Deborah Kalb. Dina Gold is my distant relative, through our mutual cousins. For a previous version of this Q&A, please click here. Dina Gold will be appearing at the Hyman S. and Freda Bernstein Jewish Literary Festival at the Washington DCJCC, which runs from Oct. 18-28, 2015.
Posted by Deborah Kalb at 5:30 AM