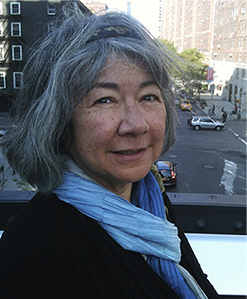 Diana Y. Paul is the author of the new novel Things Unsaid. She has taught at Stanford University, and has written three nonfiction books about Buddhism. She also is a printmaker focusing on woodblock and mixed media prints. She lives in Carmel, California.

Q: Money is a big theme throughout the book. Why did you choose that as a main issue on which to focus?

A: Money can be a symbol, a substitute for love. We see this over and over again. Parents disinherit children they disapprove of, children change their behavior so they won’t be “written out of the will.” I heard stories from friends who had to choose between helping their own parents or their own children financially, with fierce disagreements between siblings.

I feel money is common as a wedge that tears apart families and that is why I wanted to write about the Foster family and their irresponsibilities, who they are and who they think they are.

What I was finding out was that many adults are facing increasing costs for their children, especially for college, and enormous costs for their parents, with assisted living. 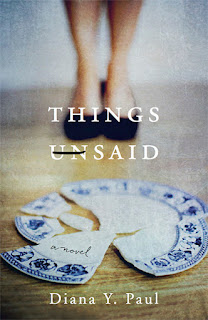 A: Things Unsaid went through so many changes, I can’t remember all of them. I slashed 100 pages from the story before it went to press.

I knew the main character, Jules Foster, had to find some Zen moment of peace and self-awareness. That was a given. I just didn’t know how that would happen so I wrote at least six different endings and prefer the ending as it is now. I kept struggling with the limited possibilities for the main character to find joy.

The editors at She Writes Press were brilliant in their suggestions for tightening the story!

Q: Which other authors have inspired you?

A: There are so many of them. Three that came to mind when I was revising and after I’d submitted the book are Anne Tyler, Evan Connell, and Elizabeth Strout. I never read a sizable amount of their books until after the final draft went in. After the book had gone to press, I realized that they are the ones that stuck in my head, on a subconscious level. Also [the writing of ] J. Courtney Sullivan.

A: My next novel, after the dark and sometimes distressing portrait in Things Unsaid, is a comedy tentatively titled A Perfect Match about a 30-something woman manager at a Silicon Valley high-tech company.

She has everything she wants in life—an interesting job, supportive parents, wonderful friends—but no partner. So, she actively seeks the perfect match through online dating.

Q: Was your writing process different?

A: I don’t think so, because there’s a lot of ironic or somewhat comical chapters in Things Unsaid—but I left it out. My beta readers—some said leave the funny [material] in there. But I wanted the story to deal with heartbreaking issues.

A Perfect Match could just as easily be more serious—how women do a trip on themselves about getting married, having children; they force themselves to do it—it could have been serious.

Buddhism is one theme woven throughout Things Unsaid.  The main character, Jules Foster, wants to be her own person, and wants to get away from her parents. But then her parents ask for a financial bailout, which Jules reluctantly agrees to, reversing her family’s plans and desires, deepening the conflict.

Many are facing the same situation but, as both a practicing Buddhist and a former professor in Buddhist Studies, I wanted to interlace the feelings of Catholic guilt with Buddhist karma.

I was raised Catholic. I liked the idea, since I became a practicing Buddhist, of how two value systems can integrate—and how they’re at odds.