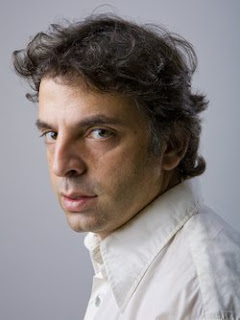 Etgar Keret is the author of the new memoir The Seven Good Years. His other books include the story collections The Bus Driver Who Wanted To Be God and Suddenly, A Knock on the Door. His work has appeared in a variety of publications, including The New Yorker and The Wall Street Journal. He lives in Tel Aviv.

Q: What common themes do you see among the essays in The Seven Good Years?

A: The way I see it, this book is about my family. It could be about any family anywhere, but the fact that it’s in Israel takes mundane issues and plays them out at a higher volume.

Every parent [has certain fears] but in Israel it’s not abstract, you know your child is going into the Army. Every parent can have an argument with their kid, but in Israel, he [has to listen to you and lie down] on the ground in a missile attack. It’s the same thing, but the stakes are higher.

Q: How did you come up with the book’s title and what does it signify for you?

A: I’m the child of Holocaust survivors, and the idea of lineage was a fantasy for my parents. My mother lost her parents as a child…When I had a child, my parents were alive. For seven years, I was lucky enough to be both the father to my child and a son to my father. 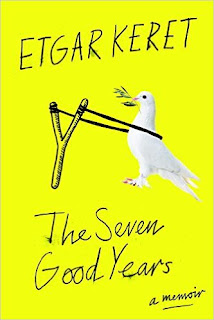 When you talk about the seven good years, it’s related to Pharaoh, and then there are seven bad years to follow. It wasn’t as if I thought of the future as bad, but it was fatherless. The equivalent would be not a lack of food, but a lack of fatherhood, someone I could come to and ask for advice.

It’s not only the seven good years and [then] you’ll all be struck by plagues, but I knew it would be years in which I would live without my father’s warm [presence].

Q: Your essays focus on many serious topics, but you also include a lot of humor. What do you see as the role of humor in your writing? 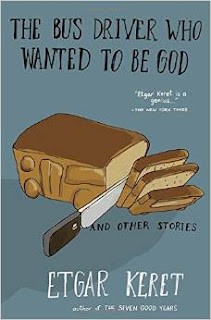 A: I’m a very political person, and I write political op-ends, but the book tends to be less political and more an attempt to humanize. People say, “I’m pro-Israeli,” or “I’m anti-Israeli.” I think [with] all this talk—many people see the country as some kind of ideal that they’re either for or against…

This book is coming out next month in Persian. The translator said, I grew up every morning saying death to Israel [but] after I read the book, it’s not as if I’m saying you’re good guys, but you’re human beings….

Q: As someone who travels frequently to a variety of countries, have opinions about Israel changed over the years?

A: The situation is deteriorating. I encounter more and more criticism toward Israel. In the past, it was easier to brush the criticism off; most of the time it was not correct. Now with the current government, I don’t have good arguments against [the critics]….

The country is beautiful and the people are wonderful, but the government is doing us a very bad service. When I meet American Jews, they say none of the actions taken are ones we agree with, but you in Israel have missiles shot at [you] and serve in the army—we [Americans] are in no position to criticize. 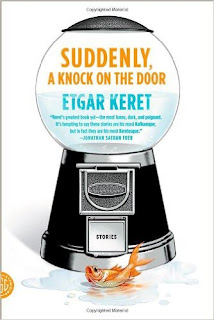 I would say the more you care about people, the more you criticize. If your cousin is using drugs, if you didn’t care, you would do nothing. If you did [care], you would intervene. I don’t think the role of American Jewry is to do whatever the Israeli government thinks, but to support the role of Israel that you can be proud of….

Regardless of whether [the Israeli government] is left-wing or right-wing, it should offer its people hope. [The government] needs to have a plan. I feel it’s been a horrible week in Israel, and the current thing is that nobody can come up with a best-case scenario. There are no good scenarios.

To say that when we’re attacked we’ll retaliate with great force—it’s a big failure of this government; it’s not leadership. The lesson in the Middle East is that if things don’t get better, they get worse.

Q: On another subject, do you prefer writing fiction or nonfiction?

A: It’s more natural for me to write fiction. When I write an amazing story that actually happened to me, I can’t take credit for that. When I read a story, I can say, Wow, I made it. When I write a nonfiction story, there’s no way I can have a claim to fame for writing it. But writing this story was extremely important to me.

When I have a book event, [people will ask,] The Seven Good Years, or The Bus Driver Who Wanted To Be God—which would you recommend? On the one hand I’m proud of my fiction, and on the other hand, I’m proud of my family. I say, Get both, come on!

A: Right now I’m working on a TV series. It involves real estate and time traveling, two things I know nothing about.

A: When I’m on tour, I sometimes get to a place once or twice. With the JCC in Washington, I love coming here. All the events I’ve had here were very memorable. The book is out in more than 40 countries, and I’ve schlepped to all of them. This is one of the best audiences in the world!

--Interview with Deborah Kalb. Etgar Keret will be participating in the Hyman S. and Freda Bernstein Jewish Literary Festival at the Washington DCJCC, which runs from October 18-28, 2015. His Facebook page can be reached here.
Posted by Deborah Kalb at 2:49 PM