Susan Orlins worked with Gerald Anderson on the new book Still Standing: How an Ex-Con Found Salvation in the Floodwaters of Katrina. She also has written Confessions of a Worrywart. Her work has appeared in a variety of publications, including The New York Times and The Washington Post Magazine. She is based in Washington, D.C.

Q: How did you meet Gerald Anderson, and how did you end up collaborating on this book?

A: I met Gerald Anderson in October 2013, on my first day as a volunteer editor at Street Sense—Washington, D.C.’s street newspaper that is written and sold by homeless vendors.

He was hunched [over] a scrap of paper, scratching out an article to thank his customers for sending him back to New Orleans for the first time since he was evacuated after Hurricane Katrina.

Gerald told me he had dropped out of school in seventh grade but learned to read and write in prison. He was 45 and had been out of prison for nearly a year, one of the longest stretches since he was 15.

My antennae went up when he told me he had rescued dozens of Katrina victims, and I said, “Let’s write a series about what you went through during Katrina for Street Sense.”

Gerald wasn’t ready to trust me. Finally a couple of months later, he agreed to meet me at Starbucks. He started talking and I tapped out his riveting story on my laptop. I asked questions, he answered. Early on, we talked about this becoming a book. Gerald wanted to call it Still Standing.

It was another few months before I learned that he was addicted to crack cocaine. Fortunately, a judge sentenced him to a residential drug rehabilitation program.

For the next three months, every Sunday—visiting day at rehab—I biked six miles with fried chicken and my laptop to continue writing Gerald’s story with him.

Gerald has now been substance-free for a year and a half. We continue to meet every week. His pride is deservedly palpable that in less than two years he has remained substance-free, has overcome homelessness, and has become a published author. He likes to say, “I’m still standing!”

Q: What was the writing process like for the two of you as you worked on the book?

A: At first we would meet at Starbucks, I would buy two egg salad sandwiches, we’d pull up a couple of stools to a window counter, and we would work steadily for nearly two hours.

Gerald wove dramatic, sometimes humorous, tales of prison life into his Katrina story; he called upon skills he learned behind bars to battle floodwaters and help save trapped victims.

After we would meet and write, I would go home and tweak the story: making cuts and moving things around. In the beginning, I wrote the narrative in standard English and kept the quotes in Gerald’s Southern African American dialect.

When I showed the first few chapters to a friend, he commented that some language in the narrative didn’t sound like Gerald’s voice (e.g. “pristine”).

That’s when it became suddenly obvious to me how much stronger the book would be if written entirely in Gerald’s dialect. His gift for storytelling, his dialect, and his cadence lend immediacy and authenticity to his unusual ordeal. 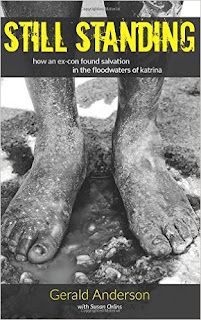 Gradually our friendship grew we began talking more and more about our personal lives, mainly the drama Gerald experiences daily. For instance, there was the day he was heading to an appointment with his parole officer and he jumped onto a Metro track to rescue a man who had fallen.

Q: What impact did Hurricane Katrina have on Gerald Anderson?

A: Gerald’s passion for the New Orleans he knew is indisputable. However, he likens his post-Katrina evacuation to being released from prison. In addition to the death and devastation he experienced in his hometown, communities are forever gone, friends scattered.

In 2005 Gerald arrived in D.C. and went back to his old ways of drugs and crime. He served a five-year sentence for selling heroin. Shortly after he got out of prison, he learned that he could earn money selling Street Sense. Until then, he says, “I didn’t know there was another way.”

Gerald believes that if it were not for Katrina, he would be in prison or dead. Katrina—via a jagged path—led him to selling Street Sense and writing. He now has given a formerly unimagined purpose as well as the loving friendship of his customers, who are like family to him.

Q: And what has been the impact on both of you of writing this book?

Gerald knows how proud they all are of his writing as well as his determination to remain substance-free.

As for me, knowing Gerald has enriched my life. Our unlikely friendship has broadened my perspective on prison, homelessness, and drugs. I’ve learned firsthand how much one man can accomplish with so little. 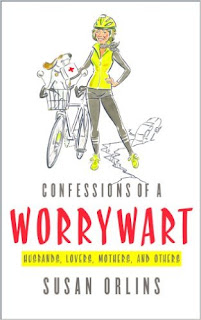 Before meeting Gerald, the writing topic that interested me most was me. I feel less isolated, less self-absorbed now, and I am grateful to Gerald for wanting to write his story with me.

A: Gerald and I have been busy giving talks and interviews about the book. We also continue writing his story “After Katrina” for Street Sense, which we expect will be another book in the future.

A: We welcome book clubs to contact us about speaking with them via phone, Skype, or in person. Please contact Susan Orlins about this or anything else related to the book at stillstanding@katrinastillstanding.com.