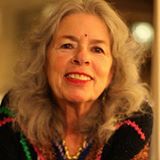 Marione Ingram is the author of the new memoir The Hands of Peace: A Holocaust Survivor's Fight for Civil Rights in the American South. She also has written the memoir The Hands of War: A Tale of Endurance and Hope, from a Survivor of the Holocaust. Born in Hamburg, Germany, she is based in Washington, D.C.

Q: In your new memoir, you write, “I was grateful for the opportunity to join hands with others in a movement for social justice that eventually transformed me more completely than it transformed America.” How did you get involved in the civil rights movement, and what are some of the ways in which your experience transformed you?

A: I began to participate in civil rights demonstrations in 1960, after moving to DC from NYC and finding that racial discrimination was rampant here. Even hospitals were segregated.

I soon became an active member of the DC Congress of Racial Equality and joined in the investigation of discriminatory practices, in attempts to negotiate equal treatment, and when that failed, in organizing nonviolent protests to persuade the discriminator to change. 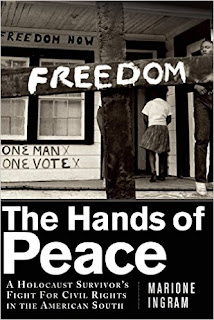 Even before I went to Mississippi and confronted the murderous KKK, I was transformed by my participation in the movement from being a victim of virulent racism into a nonviolent combatant of racism. For a Holocaust survivor, this was a healing, life-altering experience.

Q: Your first memoir dealt with the Holocaust. How did the experience of writing this one compare with that of writing The Hands of War?

A: Writing about genocide and horrors of war that one has experienced is very difficult. It meant remembering and to some extent reliving what was done to loved ones, feeling again the hatred and desire of Germans to exterminate us, the constant fear, hunger, hiding, being forced inside the worst inferno ever created, witnessing unspeakable suffering, and much more.

I started writing in the 1950s, hoping to temper the PTSD I was experiencing, but was soon motivated by the desire to provide a memory of relatives who were murdered or whose courage in resisting would not otherwise be acknowledged.

In contrast, writing about the civil rights movement was not traumatic since that was an exciting, even inspiring experience.  In Mississippi I felt I had found the kind of caring, loving, community experience that had been denied me as a child--almost like getting another family.

Because of backlash and burgeoning racism, however, I was afraid of what I would find when I returned after 50 years. 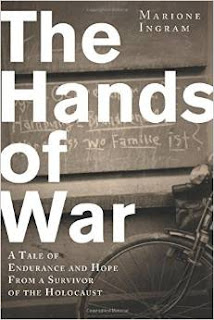 Q: How did you come up with the titles of the two books, and what do they signify for you?

A: The Hands of War is from Shakespeare's Julius Caesar, where Marc Antony describes what Italy will become as a result of the assassination of Caesar.

"Blood and destruction shall be so in use/ And dreadful objects so familiar/ That mothers shall but smile when they behold/ Their infants quartered by the hands of war." That's what Nazism made of Germany.

The Hands of Peace refers to the thousands of people whose anonymous acts of nonviolent defiance made the civil rights movement.

Q: What do you see looking ahead when it comes to social justice issues in the United States?

A: Racism remains a grave threat to Americans. It shreds the social fabric, maintaining huge ghettos of deprivation and gulags of incarceration for African Americans. And it thrives and renews itself because it is easily exploited for political gain.

When I was asked by Fannie Lou Hamer to go to Mississippi in 1964, she told me: "It's all about the children." Fifty years later I returned to Mississippi to find the political landscape transformed--one of the children who had attended my Freedom School had become first black mayor of her town--but that many blacks were still struggling. I was told, however: "The children will lead the way."

A: Daniel, my mate for almost 60 years, and I are working on a book about the people we lived among in Tuscany and for seven years on a tiny Sicilian island.

--Interview with Deborah Kalb. Marione Ingram will be participating in the Hyman S. and Freda Bernstein Jewish Literary Festival at the Washington DCJCC, which runs from October 18-28, 2015.