Stephen Church is the author of the new book King John and the Road to Magna Carta. His other work includes The Household Knights of King John. A professor of medieval history at the University of East Anglia, he lives in Norwich, England.

Q: What are the main reasons for King John’s horrible reputation, and do you think it’s completely justified?

A: I think, to be absolutely honest, the horrible reputation comes from a later misunderstanding of John and his reign. It’s a hard question to answer—his reputation gets worse as time goes on. The people who were rebelling against him in 1215 see him as a tyrant, as a bad king, but his reputation as an evil king picks up pace as his reign recedes into the memory of history. So he becomes a comic-book villain.

We see that in the association of John with Robin Hood—and that didn’t happen until the 16th century [or even] the 19th century. Now we can’t even imagine Robin Hood without King John, but it is such a recent part of the story. We love baddies, don’t we! Superheroes have to have super-villains.

What happened is that medieval Robin Hood tales are set in the reign of one of the Edwards, in the 14th century. In the whole of the Middle Ages, that’s where they’re set. In the 16th century, they were set in different times--in the time of Henry III, [or] another tradition was in the 1190s.

The 1190s one captures the imagination in the 19th century—that’s where wicked Prince John comes in. John’s reputation gets worse as time goes on. In Tudor England, there was some attempt to rehabilitate John’s image as a defender of English values…it’s a complicated picture. 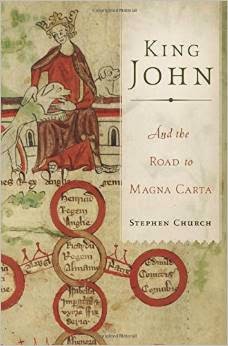 Q: One of the key events of King John’s reign was the signing of the Magna Carta--800 years later, what is its significance today, and how important was John in its creation?

A: Its significance today is that it has become a totemic document. It’s almost a touchstone for what we think our rulers should be—the customs and laws are not just what the rulers make it up to be, but what we as a community say it is. It’s against arbitrary power, and the arbitrary use of power. That’s why it still has value today.

Magna Carta is a time-travel document. Many documents are stuck in the time period in which they were created. Magna Carta is a rare document because it travels through time and means different things to different people….

How much was John responsible for that? It’s a difficult question to answer. It emerges out of the particular circumstances of John’s reign, but there’s a strong argument for saying [there was] something like this in the atmosphere of 13th century England—it’s not just critical of the way John ruled, but also the way Richard the Lion-Hearted ruled and Henry II ruled.

It was annulled very quickly, but reissued in 1216 by men who were to look after Henry III. It was not only about John, but about kingship. It was reissued in 1217 and 1225. Why? Because lots of people thought kings ought to rule according to principles laid out in Magna Carta.

It would be wrong to argue that Magna Carta would exist without John, but none of us are masters of our destiny. There’s an argument that there’s a very real feeling in the early 13th century within the English kingdom [relating to Magna Carta].

Q: You note that there is a great deal of information available about the reign of King John that wasn’t available for some of his predecessors and successors. Why is that?

A: There were two things going on. We can’t explain one of them. All of a sudden, the king’s writers, in his chancery, suddenly started recording the letters they were sending out. It’s like switching on the “sent” mailbox. There are tens of thousands of letters issued by Richard, by Henry II, [but we don’t have them]. Formal charters survived, but ordinary letters, to a sheriff, to ports, to representatives in localities, that just disappeared. In John’s reign, they start recording letters.

Q: It would be interesting to know why!

A: We don’t know—historians have agonized over it.

Q: And the second thing?

It’s a bit like the domestic servants at the White House running the government of the United States. The steward, the butler, the chamberlain were running the kingdom as well, so the king involves himself in absolutely everything. Some might be great matters of state, or it could be a letter that says to order 100 barrels of wine. It’s personal, and big-state stuff as well.

Q: So before John this was also going on?

A: It was going on before John, but we don’t have any of the evidence. We have to imagine Richard or Henry II doing the same thing. In John’s reign, they started recording the correspondence.

Then [after John,] with Henry III, there was a real separation of personal and public, because there was a long minority. He was 9 when he became king. There’s a 15-17 year period where the English government was transformed, where you get the separation of public and private. The king’s officers were part of the entourage, but aren’t welded to the king’s personal needs…[that] makes John’s reign unique.

Then in the 14th century, we get the separation of the king’s writing office from the king himself. With Edward II or III, you don’t know where they are on a day-to-day basis. With John, we do. It’s the particular circumstances of John’s reign—it’s like a supernova.

Q: What surprised you most as you were researching this book?

A: Lots of things. One of the things is what came across—John’s energy, enthusiasm, and real optimism. Despite the fact that he was notoriously suspicious of other people, and that he faced defeat, he optimistically picked himself up again. I came away thinking how optimistic John must have been, even after disaster after disaster…he didn’t seem to learn from his mistakes. He was trying to rule Poitou like England, and he couldn’t, and [also tried that with] Ireland. It was almost as if he didn’t learn…

Q: Are you starting on another book now?

A: No, I’m still in the process of picking up the pieces of all the things I dropped [while writing this]. This book took four years; it’s been a big project. When I write, it’s very difficult to concentrate on other things. I’m trying to pick up from my university work, and I’m doing talks about the book. The next thing will be for Penguin, a short book on Henry III.

A: I’ve tried to write in a way which is accessible, but I have not tried to oversimplify things. If a difficult issue [comes up] I’ve stopped and tried to think about it. The strength of the book is not so much in the narrative but that I tried to write it without the benefit of hindsight. Every time an issue is difficult, I stopped the narrative to discuss it….