Christian G. Appy is the author of the new book American Reckoning: The Vietnam War and Our National Identity. His other books include Patriots: The Vietnam War Remembered from All Sides. He is a professor of history at the University of Massachusetts Amherst.
Q: You write that "the Vietnam War shattered the central tenet of American national identity"--the idea of "American exceptionalism." What were the main reasons you believe this happened, and is this reversible?
A: The idea that the United States is a superior and invincible force for good in the world, always on the side of democracy and freedom, has deep roots in our history and had its broadest appeal, I believe, in the 1940s and ‘50s.
In the 1960s, with the escalation of warfare in Vietnam, a majority of Americans gradually came to the conclusion that the war had been initiated under false pretexts, was fought to prop up an unpopular authoritarian South Vietnamese regime, and was waged with a kind of ruthlessness that could no longer sustain any illusion that we were “saving” or “defending” the people of South Vietnam.
In 1969, when the public finally learned about the My Lai massacre (the close-range murder of some 500 unarmed and unresisting South Vietnamese civilians by a company of U.S. infantrymen), that seemed to confirm for many that the U.S. was waging an aggressive and unjust war.
Others continued to defend the war, of course, but many pro-war Americans responded to My Lai by saying that all sides commit atrocities in war. But to say that is itself an admission that America is not exceptional, that it does not put a “higher price” on life. And when the war was ultimately lost, the idea of “invincibility” went out the window as well.
I don’t think we will ever recover the faith in American exceptionalism we had before Vietnam.  Nor should we. The historical record does not justify it and we’d be better off, I believe, to dispense with a dangerous myth that makes us too willing to acquiesce to the misuse of power by the tiny elite that makes foreign policy in our name.
The faith is deeply damaged, but still with us. After Vietnam, it was cobbled back together again, but in a more beleaguered and defensive form. It is also more bombastic. American exceptionalism is now such an endangered faith that those who uphold it most fervently often berate anyone who challenges it. 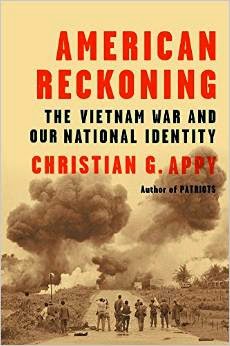 Q: How did you research this book, and what surprised you most in the course of your research?
A: My research was wide-ranging and included everything from movies, songs, and memoirs to presidential speeches, government documents, and contemporary journalism. I wanted to recover a sense of how Vietnam came into American consciousness in the 1950s and how our perceptions of the war changed over time.
With that in mind I explored a lot of primary sources. I also relied heavily an extraordinary body of secondary sources produced by historians and other writers.
One major goal of the research was to put the war in a larger cultural and political context than most books on the subject. I tried not only to illuminate the history of the Vietnam War but to show how we have wrestled with the myths and realities of our global war from the earliest days of the Cold War to the present.
I understood when I started that the war in Vietnam had a profound impact on our national identity but I was surprised by the depth and breadth of those legacies and how even our efforts to forget the war, or to repackage it into something more palatable, showed the intensity of its persistent impact. If the war had been less significant we would not have tried so hard to find ways to “get over it.”
Q: What impact do you think the Vietnam War has had on U.S. policymakers' decisions about whether to send troops to war in subsequent conflicts?
A: The most important lesson we might have learned from the Vietnam War is to dismantle the imperial presidency and to make foreign policy far more transparent, democratic, and accountable to an informed public. In the 1970s Congress made some efforts to curb the war-making power of the executive (e.g. the War Powers Act) and to open up public debate about foreign policy.
However, those efforts were incomplete and easily overwhelmed by a foreign policy establishment (including the military-industrial complex) that sought ever more power and ever greater secrecy.
As a result, there was never any fundamental rethinking of America’s role in the world and no internal challenge to the persistent effort to maintain and enhance global military superiority.
In fact, when the Cold War ended and another round of major reform and military down-sizing might have occurred, instead we doubled-down on the goal of full spectrum military dominance and extended our colossal network of foreign military bases. 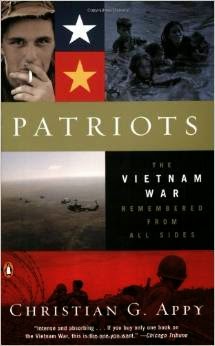 However, I can identify one positive impact Vietnam had on policymakers. From the end of the Vietnam War in 1975 until 9/11, policymakers understood that the public would not tolerate long, massive, indecisive wars with high American casualties, especially when there was no clear threat to national security.
Although the U.S. intervened directly and indirectly in dozens of places, during the quarter century after Vietnam only about 800 Americans died in combat. In that sense, the memory of Vietnam served as a modest brake on military adventurism.
After 9/11, however, all the brakes came off and once again we waged open-ended and seemingly endless wars to support unpopular regimes in countries where American troops are widely regarded as unwelcome foreign occupiers.
And, as in Vietnam, we have fought long after the majority of Americans opposed their continuation. And, once again, our leaders have failed to achieve their stated objectives.
Q: How did you decide on the book's title, and what kind of
reckoning has America had as far as the Vietnam War is
concerned?
A: I’m full of ideas for titles of other people’s books, but find the process agonizing with my own. I usually don’t settle on one until they are almost finished.
However, when “American Reckoning” finally popped into my head it felt instantly right. I wanted the title to evoke a serious struggle over politics, conscience, and morality.
Reckoning has a number of possible meanings, but when linked to the Vietnam War I think it strongly suggests the ongoing process by which we have evaluated and judged that war and how that soul-searching reshaped the way we think about ourselves as a nation and a people.
The book argues that the war did indeed produce a serious reckoning but it remains incomplete. In the decades after the Vietnam War our public culture has not fully grappled with the war’s hardest questions and realities.
Instead of focusing on the damage we did in and to Vietnam, we have generally focused on our own war-related wounds, real and imagined.
While dissenting memories survived, the dominant voices in our culture have been quite successful in refocusing attention on the war as an American tragedy.
For several generations our children have been taught to honor the American veterans of Vietnam, but they have not been encouraged to explore deeply the history of the war itself and why it was so destructive and controversial.
Q: What are you working on now?
A: I haven’t settled on a new project but I’m thinking of writing about World War II and American memory, another enormous topic. There is still a great deal about that war we have forgotten, or badly distorted, or never knew.
Part of the mystery of the subject is personal. My father was a Marine Corps dive bomber in the Pacific in 1944. He died in 1990 having told us very little of his experience. We have only his aviator’s log book and a few stories.
Q: Anything else we should know?
A: There’s a lot more we all should know, me as much as anyone, but I remain hopeful that studying the past can help us in the present. I wouldn’t do this work otherwise.
And while recent years have been very depressing by many measures, one thing history does suggest is that fundamental change can sometimes happen at unpredictable times and in unexpected ways.
Lately I’ve been thinking more and more about what kind of world my two-year old granddaughter will inherit and hoping we won’t leave behind more of a mess than any generation could reasonably be expected to fix.
--Interview with Deborah Kalb. This Q&A also appears on www.hauntinglegacy.com.