Gwendolyn Zepeda is the author of the new poetry collection Monsters, Zombies + Addicts. Her other work includes the poetry collection Falling in Love with Fellow Prisoners, as well as a short story collection and three novels. She is the first poet laureate of Houston, Texas.

Q: You group the poems in your new collection into four categories: Addicts and Obsessions, Monsters and Warriors, Zombies and the Bitten, and Animals and Nature. How did you come up with these groupings?

A: I'd been thinking a lot about people who find security in conformity, and how they're often uncomfortable with yet titillated by people who refuse to conform. Those themes found their way into my work.

Then I read a lot of analysis of the Walking Dead and its zombie-themed predecessors that said slow-moving zombies are a metaphor for conformists, philistines, and the like. So I made that connection, then came up with the names for the other themes that had featured heavily in the book. 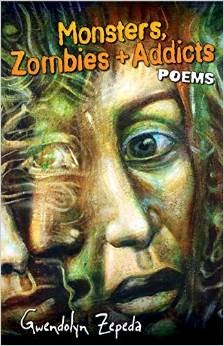 Q: You also include a portion of the lyrics from Neil Young's "Sugar Mountain" at the front of the book. Why did you choose to include those lines?

A: Those lyrics have always resonated with me, since I was a teenager, because they captured my feelings about coming of age so well. Being unable to enjoy the carnival that is Sugar Mountain is about missing out on the fun and losing one's innocence. I try to write about that phenomenon pretty often and decided to finally credit Mr. Young as my inspiration.

Q: As the poet laureate of Houston, do you think your poems are heavily influenced by that city, and if so, how?

A: I've spent 75 percent of my life so far in Houston, and I'm really inspired by its climate, its urban wildlife, and its demographic diversity. It's a balmy and voluptuous place. I like the way the skyscrapers and long, gray freeways sit right next to secret swamps and tropical flowers, and you can find any kind of food or religion. It's difficult to be bored here, so there's always something to write about. 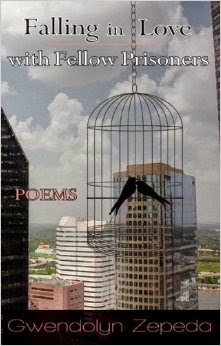 Q: You also have written novels, children's books, and short stories. Do you have a preference, and is your writing process similar no matter what you're writing, or does it differ?

A: I like writing short stories best, so it's funny that they're what I've published least, right? I like personal essays, too, which I write infrequently for magazines or online.

My process for each genre is totally different. I tend to think of an idea I want to write about, then decide what genre to employ based on the idea. Sometimes I'll try a few before settling on the form my readers eventually see.

A: I'm writing a young adult novel and putting together a tiny comic book for fun. (And re-doing a mural in my bedroom, and knitting a scarf with sock yarn.)

A: No... Well... Hmm. I hope if new readers get a chance to check out my work, they find something that resonates with them or inspires them in some way. And I hope my long-time readers know how much their support has meant to me throughout the years. (Answer: A lot!)