Brian Jay Jones is the author most recently of Jim Henson: The Biography. He also has written Washington Irving: An American Original. He is the president of Biographers International Organization, and he lives in Maryland.
Q: What made you want to write biographies, as opposed to another form of nonfiction?
A: I love the intimacy of biography.  Biography is history made personal—and it permits you to view events through a certain lens, a certain perspective, which you just can’t get from other kinds of nonfiction. History doesn’t just happen. It isn’t something that unfurls itself like a rolled up scroll. History is people doing things, and people are just plain interesting.
Q: What do you think makes a biography compelling?
Well, again, people are compelling. What makes biography great is that you can approach it in almost an infinite number of ways, all of which—in the right hands--can work.
You can write it like a novel, complete with dialogue and internal monologues. You can write straight narrative. You can write about only a portion of a life. You can do it in graphic novel form. You can write a biography of a fictional character, a disease, or a building. It’s an incredibly flexible genre.
For readers, I think it’s that intimacy I talked about earlier, as well as that flexibility that makes for a compelling biography.
There’s a reason there are hundreds of biographies of George Washington, for example.  You can tell his entire life story in a straightforward fashion, sure—but you can also write a biography of him as a president, or as a Revolutionary general, or as a politician, or a statesman, or a father…the list goes on and on. 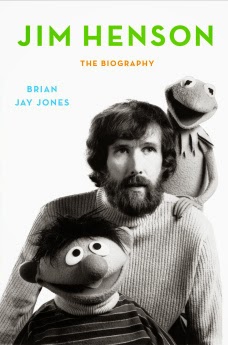 Q: Why did you choose Jim Henson as the subject of your latest biography, and was there anything that particularly surprised you in the course of your research?
A: Jim Henson and the Muppets have been part of my life, and probably yours, for as long as I can remember. In fact, I’m pretty much Muppets Generation 1.0—I was 2 when "Sesame Street" premiered in late 1969, nine when "The Muppet Show" debuted in 1976, 15 when "The Dark Crystal" was in the theaters, and in college when "Labyrinth" came out.
That makes me part of the first generation entirely raised on Jim Henson and his work—and writing his biography was truly a dream project.
One of the really great things about Jim Henson is that he’s pretty much as you expect him to be: genuinely kind, dazzlingly inspirational, immensely talented, and—as his closest collaborator Frank Oz said—“delightfully imperfect.”
What you see up there on screen—that funny, frantic, Muppet family—really is Jim Henson and the way he worked with people around him.
Still, having said that, there were still some things that were somewhat surprising.
First, he was almost pathologically conflict-averse. You might suspect that, because Jim’s such a decent guy, but I had no idea the sheer extent of it.
Jim wouldn’t resolve debates with his attorneys, couldn’t fire or discipline his staff, and wouldn’t even bicker with his wife, Jane. As Jane herself told me, “it was fight or flight, and Jim always chose flight.”
Second, I was surprised and impressed with what a fantastic businessman he was. Again, it makes sense; you can’t own a company with workshops in London and New York without being good at what you do.
But Jim was really good, even from a young age. He was 17 when he started his company, and from day one, he knew his work had value. While still in his 20s, he was offered a very large sum of money to sell one of his characters outright, and Jim refused, telling his agent, “Never sell anything I own.”
Q: You've also written a biography of Washington Irving. What got you interested in writing about his life?
A: While I was a literature major in college, I never really got beyond Irving’s two quintessential American short stories, “Rip van Winkle” and “The Legend of Sleepy Hollow.” But I rediscovered him again in the late 1990s, because I’m a Christmas junkie.
At that time, I was reading a book about the history of the Christmas holiday in America, which basically explained that we as Americans have this misty-eyed vision of Christmas that never really existed, but we think it did because Washington Irving made it all up and then told us that this was the way it had always been.
And it was hugely influential – it changed the way we think of Christmas, and it influenced Charles Dickens, who wrote pretty much the definitive Christmas story. 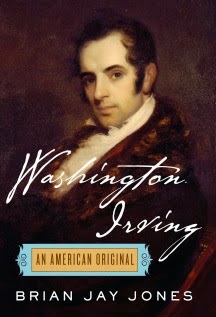 Anyway, that was all news to me, so I found Irving’s Christmas stories—which are hidden in plain sight right in the middle of The Sketch Book, his collection of short stories that includes “The Legend of Sleepy Hollow” and “Rip van Winkle”—and I was absolutely blown away by them.
Not just the stories themselves, which are terrific, but also with his voice. I was expecting some stilted 19th century Protestant prose, and instead here was this guy writing in this really funny and surprisingly spry style, with winking asides at the reader.
I wanted to know more about him . . . and promptly hit a wall. Nothing had been written about Irving in nearly 80 years.
What I really love about Washington Irving—apart from his stories—is that he’s almost like a 19th century Forrest Gump. If there was somebody famous around, Irving knew them. If there was some world-changing event going on, Irving was in the middle of it.
He was not only our first great American writer, but one of our first internationally-famous American celebrities, and I really wanted to look at Irving both as a writer and as a pop culture figure. He’s a lot of fun.
Q: You're the president of Biographers International Organization, which is holding a conference in Washington, D.C., the first weekend in June. What are some of the issues you'll be discussing at the conference?
A: I’m really proud to be a part of BIO—we’re the only organization around dedicated to the craft of biography, and to supporting biographers—and one of our flagship events is our annual conference, which is in Washington on June 5-6, at the National Press Club.
While it seems I say this every year, this year’s conference really DOES promise to be one of our most compelling—we sort of threw out the playbook this year, so we’re doing some really new and innovative things.
Our breakfast plenary session, for example, features Evan Thomas and Douglas Brinkley in conversation. We’ll continue with lively panels and solo speakers, including Betty Boyd Caroli, Linda Leavell, David Maraniss, and Hampton Sides. At lunch, you’ll hear from Pulitzer Prize-winning biographer Taylor Branch….
Our panels remain second to none.  We’ll cover topics like “Biography as History,” “Diagnosing Your Subject’s Medical Condition,” and “Privacy and the Biographer,” as well as sessions on marketing, promotion, and writing technique.  We really are your full-service stop for biographers and biography.
Q: What are some of the biographies that you've especially liked or been inspired by?
A: It’s probably because I come out of politics—I’ve been working for elected officials for 25 years—but I think Robert Caro’s TheYears of Lyndon Johnson: Master of the Senate is one of the finest, and most exciting, bits of biography of all time.
Another favorite of mine—and a book that really influenced me as a biographer—is Neal Gabler’s Walt Disney: The Triumph of the American Imagination, a really intensely researched biography that I re-read constantly.
I love Peter Guralnick’s book Careless Love: The Unmaking of Elvis Presley, all about Elvis in his waning, karate-chopping, jump-suiting years, a tragedy of Shakespearian proportions.
And if I can admit to a guilty pleasure, it’s Albert Goldman’s The Lives of John Lennon, a spectacular train wreck of a biography that I also re-read constantly.
Q: What are you working on now?
A:  Someone once noted that my niche seems to be enigmatic American pop culture icons—a description I loved--and I’m working on the ultimate one now: George Lucas.
In the same way I was a Muppets Generation 1.0 kid, I was also a Star Wars Generation 1.0 kid as well – I was 9 when the movie came out in 1977, which pretty much made me its target audience.
Getting to tell his story is another one of those dream projects, and there’s so much great material to work with, so many wells to plumb. Can you plumb a well? Anyway, I’m having a blast, though I’m having a tough time not writing 300,000 words.  He’s a gigantic subject.
Q: Anything else we should know?
A: Go on YouTube and search for the 10-second commercials that Jim Henson made for Wilkins Coffee, a local Washington, D.C., company. I won’t say any more except: you’ll be glad you did. Trust me.
--Interview with Deborah Kalb. Brian Jay Jones will be participating in the Bethesda Literary Festival, which runs from April 17-19, 2015. For an earlier version of this Q&A, please click here.