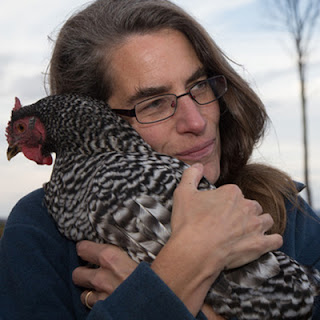 Tory McCagg is the author of the new memoir At Crossroads with Chickens: A "What If It Works" Adventure in Off-Grid Living & Quest for Home. She also has written the novel Bittersweet Manor. She lives in New Hampshire.

A: In 2010, to keep myself sane during a massive renovation that we did on our Beachmont house when we bought it, I looked through old datebooks and journals and began to write about how Carl and I came to buy the New Hampshire property we dubbed Darwin’s View.

Around that same time, I began to blog—coincidentally the week we moved up to Darwin’s View “just for the winter" in December 2012. That rendition of my blog lasted about two-three years, at which point I started working it into a book. A book that had no end. It just kept going. It took 14, 15, 16 drafts and badabing! Done. That easy.

All to say, I never felt as if I were writing a memoir. The book evolved and I still question whether it is a memoir. The word memoir is so lofty. Which I am so not. Just ask the chickens. 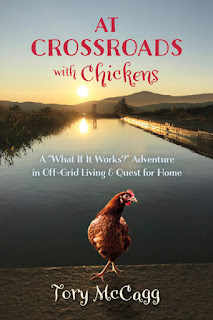 Q: In addition to writing about your experiences with your home in New Hampshire, you describe your mother's battle with Parkinson's. How did you choose the book's structure?

A: Its working title was "Darwin’s View One Breath After Midnight" and included climate change, marching to get money out of politics, the strangling of our democracy by capitalism (Demo-n-capitalism), various day-to-day chicken stories, and blow by blow, excruciating renditions (that those who helped edit the drafts patiently endured) of my letting go of Providence a.k.a. my search for home.

As each draft got written, the clear parallel between my mother and Mother Nature clarified. And the chickens were always there in the background until they were on par with the humans. In the book’s structure. Not real life. They still live in the coop.

But really, I owe a big thank you to Ann Hood. I get lost in words and ideas, and what structure might exist is very hard for me to see.

I took a memoir class from Ann a few years ago, and then continued to send her drafts of the book. Her last reading of the book, she suggested I cut about 90 pages out — much of which were the above-mentioned blow-by-blow excruciating parts. And suddenly there it was: the structure.

Q: Did you need to do any additional research to write the book? 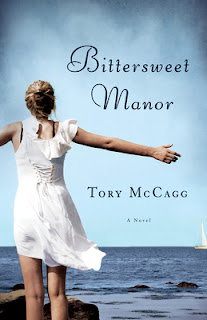 A: How is research defined? It’s kind of like reading and living life, right? Meeting the myriad people Carl and I have met at conferences on farming, soils, energy and politics, and socializing and going to more meetings, and reading about and experiencing climate disruption and its effects.

And always more questions to find the answers to: how to keep frogs from freezing in the pond in winter. How to take care of a chicken’s bumble foot or an infestation with mites. A rat in the coop? How to build soil?

I took all that “research” and shoved it into the various drafts of the book and then deleted pretty much all of it. But that understanding and knowledge is still there. Sort of. Because it’s what formed me.

A: I hope that readers will be more aware of how their choices and actions matter: It matters how they treat animals, especially the ones that they eat. It matters how they move about their world because we are connected to everyone and everything around us on so many levels.

I think that’s what I hope. Not sure if that has anything to do with the book…

A: A play titled Triage: An American Experiment in Existential Arbitration; a children’s story/book riffing off Big Red and his hens. A possible road trip for At Crossroads with Chickens. And an actual plan and vision for what we want Darwin’s View to become.

A: We can save the world. We have the technologies and abilities. That is not to say it will be easy. But we can do it.