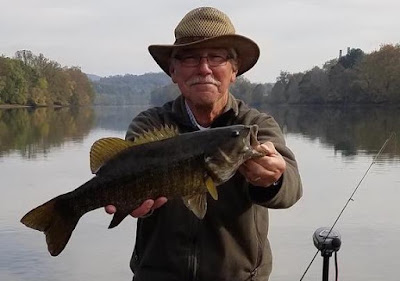 David Parrish is the author of the new book The Gyroscope of Life: Understanding Balances (and Imbalances) in Nature. He is a Virginia Tech professor emeritus of crop and soil environmental sciences, and he lives in southwestern Virginia.

Q: Why did you decide to write this book, and how long did it take to complete it?

A: The impetus to writing the book was twofold. One was my dear niece, who is an author and a book agent. Whenever we got together, she would encourage me to write a book. I never felt I knew enough about anything that would appeal to a general audience.

Then, I received a 2016 Christmas gift from my younger son of Hope Jahren's Lab Girl, which is a very readable account of her life as a biologist and soil scientist. About halfway through her book, I began thinking, "Maybe I can do something like this."  So I began writing Gyro. That was over three years ago.

I call this book "my love song to biology." My goal from the outset has been to make biology as fun and appealing to nonscientists as it has been for me.

My problem: I had no experience writing for a non-technical audience. It took me some time to find a "voice" and develop content that would appeal to a wider audience.

The book has gone through three versions. It started out as "Plant Philosophy" and was almost entirely botanical. But there are just too many good stories and examples that come from zoology. So I added lots of new words. To keep it from becoming a tome, lots of old words -- to include whole chapters -- were "left on the cutting room floor". 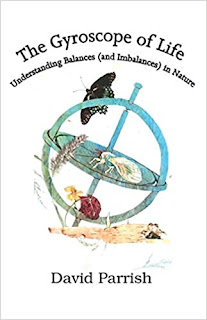 A: I was two years into working on the book when using a gyroscope metaphorically to explain balances (and imbalances) in nature just "appeared" during a writing session.

Life, whether considered at the cellular level -- cells being the basic units of life -- or at higher levels of organization (organisms, ecosystems, or even the ecosphere), prospers when all of the requisite parts are present and operating smoothly.

Anything that disrupts that balance puts life at risk -- causes the gyroscope (life) to wobble or even teeter over.

Gyroscopes were a favorite toy when I was growing up. It was a real "aha" moment when I realized how apt it was as a metaphor for life. It caused me to go back and rework major sections of chapters already written.

This was the second version of the book, which came about after letting the whole project sit on a back burner for several months, allowing me to come back to it with fresh eyes and an improved voice.

Q: You created the word "autobiologic," which you use in the book--how would you define it, and how does it fit into the creation of this book?

A: Interesting question, because this is what led to the third/final version of the book. After putting the second version of the book aside for another few months, I realized that, in my attempts to write in a more accessible way, I was venturing into some areas that were not really science-based.

I was resorting regularly to what I decided to call “autobiologic” (auto = self, bio = life, logic = reason), bits of blue-sky musing and reasoning – not science as it is more deliberately practiced.

These are occasions where, in dealing with some principle or phenomenon, I would go off on explanatory or exploratory riffs, relying more on logic than on data. The reasoning is sound, but it is not always data based.

So, to duck the potential criticism of "real" scientists, I labeled such musings "autobiologic." In the third major revision of the book, a lot of autobiological discussions were so labeled, and I felt comfortable in ascribing autobiologic to other scientists as well; Darwin used it a lot.

Q: You write that you are "sanguine" about there being solutions to the problems besetting the earth. What do you see looking ahead?

A: I am confident that Mother Nature can repair the damage we are doing to the planet if we will just allow her to. Life is resilient (extinctions aside). The gyroscopes can repair themselves and run smoothly/sustainably again.

But that cannot happen until we bring our numbers down. The way we feed 7.7 billion of us is not sustainable. The disruption of climate caused by human activities is destabilizing gyroscopes at all levels of life. Earth simply cannot sustain so many of us.

I have hopes -- which is really not the same as sanguine, but I wanted to sound positive -- that we can find a humane way to bring down the number of human beings on this planet. Demographers point out that birth rates drop as standards of living, education, and women's status rise.

We must work past the current political/social impasse caused by provincialism and nationalism and realize that Earth is everyone's home and that the same tide that lifts dinghies, skiffs, and scows also lifts ocean liners.

Only if we can gain control of our reproduction can we hope to see things begin to move in a positive direction ecologically and environmentally.

A: We could make the case that biology is an existential science. I firmly believe that understanding (and applying) biological principles can make a positive difference in human lives and in all life.

I'd like to think that this little book might cause readers to see life, gender, sustainability, science, and our place on Earth in a more nuanced way -- a way that allows Mother Nature to restore balance to life's gyroscopes.

The notion of subduing the Earth and having dominion over its living forms was okay in the day when that was written, maybe 3,500 years ago. That was in the Bronze Age, and Earth's population was probably 35 to 40 million. In the Industrial Age and with 7.7 billion of us, that philosophy simply does not play well.