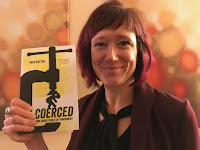 Erin Hatton is the author of the new book Coerced: Work Under Threat of Punishment. She also has written the book The Temp Economy. She is an associate professor of sociology at the State University of New York at Buffalo.

Q: Why did you decide to write this new book?

A: I did not set out to study labor coercion. I was interested in workers not protected by labor law, or people not thought of as workers. I interviewed prisoners and workfare workers, and the power dynamics came to the fore. I changed my topic to focus on that power dynamic. And I added student athletes and graduate students.

Q: Can you say more about your research, and was there anything that especially surprised you?

A: The research was primarily interviews with the four groups.

It was always challenging to figure out how to get to the workers. I intended to go into prisons in New York state, but the prison system wouldn’t let me in, so I interviewed people just getting out.

There were a number of surprises along the way. I didn’t think the four very different groups would fall under one umbrella.

One random tidbit is that it’s a pretty common practice for graduate students in the sciences [not to be allowed] to graduate because they’re productive workers in the lab. The labs are so important, they’re not letting them leave. I was shocked. 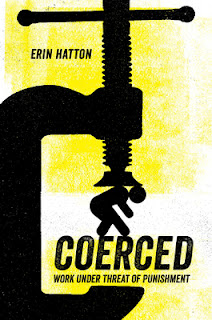 Q: You begin the book with a quote from Ta-Nehisi Coates: “You must always remember that the sociology, the history, the economics, the graphs, the charts, the regressions all land, with great violence, upon the body.” Why did you decide to include this quote?

A: In sociology, but for anyone who does research, you think about numbers, trends, data. The quote reminds us that people’s bodies are at the center of all of that. It is profoundly important for us to remember that.

Q: You describe prisoners, welfare recipients, graduate students, and student athletes. What do you see as the common ground between these groups and their work?

A: The framework I put them under is one of coercion, status coercion. As totally different from each other as they are, their bosses do wield punitive power over them in the same way.

Prisoners can’t leave. In theory, student athletes and graduate students can leave, but in fact, there’s an incredible set of disincentives for them not to. Their economic mobility is very limited.

Their bosses have so much power because they are not considered regular workers, they don’t qualify for the minimum wage. There’s no one, no HR department, monitoring their bosses.

In graduate school in the sciences, the faculty controls what they do, whether they can be coauthors on a paper, the hours they work, their working conditions, if they can keep their scholarships, if they can get a job in their field once they graduate. 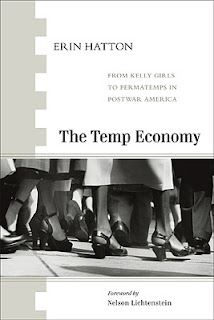 Q: What about welfare recipients?

A: Some portions of the welfare population are in desperate straits. They are assigned to do some version of “work activities”—picking up trash, cleaning subway cars.

If they don’t show up, or they don’t like the disrespect they get, they can be sanctioned or kicked off welfare. Technically it’s the caseworkers who sanction them, but they listen to the supervisors. [It affects their] access to the social safety network.

Q: What effect do you see the current pandemic having on the workers you write about?

A: Everything is in flux and chaotic. With student-athletes, there’s a real question about what will happen to them come fall. It’s really confusing. The seasons they compete have an impact on their career. They’re working so hard to be there. Missing it is devastating for them.

And many are concerned. They don’t want to be at risk, but they’re coerced from above to play. They have complicated emotions—they don’t all agree. We don’t know how this will play out.

It’s the same with science graduate students in the lab. At the labs, they’re at a standstill.

Prisoners have been put to work packaging hand sanitizer for retail, but they have no access to it. They’re digging mass graves in New York City, but have no protections.

A: I’ve started preliminary research on a different strand of a similar theme—people who are assigned to do work as part of drug rehabilitation therapy. It’s another dimension of coerced work.

A: I’m not saying the four groups are the same. It’s not just these four unique groups who are affected by this type of power. All workers experience some version of this type of coercion. If you’re unemployed, you can go into a serious depression with social and economic repercussions. A lot of a person’s identity is wrapped up in their profession.