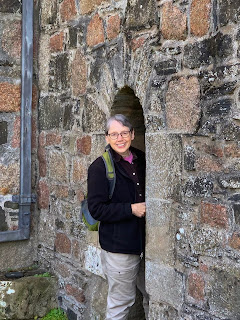 Jane Eklund is the author of the new novel The Story So Far. Her work has appeared in a variety of publications, including The Georgia Review and The Massachusetts Review. She works in marketing and communications for Keene State College, and she lives in New Hampshire.

Q: How did you come up with the idea for The Story So Far, and for your characters?

A: I came to fiction writing by way of poetry, which is to say that I followed a thread of a thread to find out where this book was going – much the same way I would write a poem.

I woke up one morning with the sound of a voice in my head, and I started writing to figure out what the voice was saying and who it belonged to. Turned out it was the voice of The Author – the unnamed older woman who seduces the also unnamed younger woman, who narrates the book.

The Story So Far isn’t autobiographical except in the way that all novels spring in some way from the interior lives of the novelists who write them. So the two key characters came from that initial voice – first, Who is speaking?, and second, To whom is she speaking?

Once I had those characters, I simply (well, okay, not so simply) built a world around them. I created Jeff, best friend extraordinaire, because the narrator needed someone to talk to, and specifically someone out and gay. The other characters pretty much wandered in of their own accord. 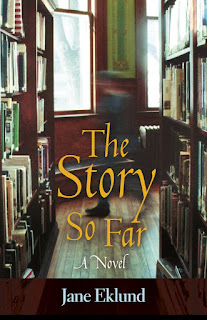 Q: The novel takes place over several decades. How did you decide on the time frame?
A: The years between the late 1970s and the early 2000s brought huge cultural changes for those of us in what’s now known as the queer or LGBTQ community.

So while the narrator comes of age – and comes out – at a time of thriving subculture, the Author, at 50, has lived through times when lesbians were considered mentally ill and could be arrested or fired from their jobs simply for living openly. By the time the novel ends, it’s actually hip to be queer.

Also, those decades were easy for me to write about as I lived through them myself. I graduated from high school in 1977, when the book opens and the narrator is 22. There are lots of pop culture references to those times, and because I experienced them, I didn’t need to do a lot of research.

All that said, I didn’t really decide on the time frame: the characters did. I didn’t plot in advance, but as I wrote, the manuscript kind of created its own structure for me to follow – if that makes any sense!

Q: How would you describe the relationship between your narrator and your author character, who are unnamed?

A: The word “complicated” comes to mind. The Story So Far can certainly be described as a love story, but it’s not the traditional kind with a happily-ever-after ending – though, indeed, I do think the ending is happy in a real-life rather than fairy-tale kind of way.

The two women do fall deeply in love, but the imbalance in their ages (the younger is 22 when they meet, the older almost 50) – and circumstances make for a changing dynamic.

Q: Each section of the book is named for a particular person--not just your author character, but Socrates, Hildegard of Bingen, and Suzanne Pleshette. How did you choose them?

A: Over the course of the year or so I spent writing the first draft, tidbits from my daily life would make their way into the manuscript.

One day I was listening to a show on New Hampshire Public Radio where panelists were discussing the Socrates Method – a way of teaching that involves asking a lot of questions, as Socrates did.

The next time I sat down to write, Socrates showed up as an imaginary character who sat, like a conscience, on the narrator’s shoulder and asked her questions.

That device worked really well, and when I finished that section of the book and realized that Socrates needed to move on, I wanted to continue with the idea of a historical figure who would show up occasionally to ask pointed questions.

I did some research to come up with Hildegard of Bingen for the next section, as the Author is a church-going Catholic and I thought a person of faith – a 12th-century mystic in this case – would be a good follow-up to Socrates and his intellect.

A: Right now I’m busy with my day job in the Marketing and Communications Office at Keene State College along with various freelance projects, but I also have a draft of another novel to work on plus couple of new ideas in the fire.

A: I think The Story So Far makes for good reading for people who want some distraction from the news right now. My hope was to write a novel that’s smart, thoughtful, and deep but not dark – with plenty of word play and humor.