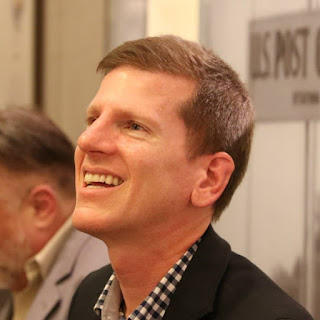 Garrett Peck is the author of the new book A Decade of Disruption: America in the New Millennium. His other books include The Great War in America and Prohibition in Washington, D.C.. He lives in Arlington, Virginia.

Q: You write of A Decade of Disruption, "This has been a dream book that was long in the making." What inspired you to write the book, and how long did it take you to work on it?

Jonathan Yardley, the book reviewer for The Washington Post, was rereading books that have stood the test of time, and one of them was Frederick Lewis Allen’s Only Yesterday: An Informal History of the 1920’s.

It’s a wonderful book, written in a very conversational tone. It got me thinking about writing a similar history of the early 2000s. So from that moment forward, as the housing bubble was bursting, I started taking notes based on the daily news.

Which leads me to your next question. I finished up the research and writing in summer 2019. So yeah, 12 years, if you’re doing the math.

Q: The book covers a wide variety of themes and issues. How did you conduct your research, and what did you learn that particularly surprised you?

A: I love research, and this one in particular I relied on the first draft of history: daily newspapers (remember when we used to get the newspaper delivered to the house?), along with history books and biographies. 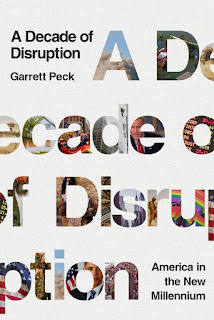 It’s not based on archival sources, but rather readily available information that the public had access to. The book is a history of our shared experiences during the first decade.

The book’s chapter are organized both chronologically and also thematically. Each chapter stands up as its own story. Readers can certainly start at the beginning and read straight through, or they can also jump right in to read the topics that interest them the most.

If you have aging parents, for example, you might want to read the chapter “The New Retirement” first. If you’re a Millennial, you may enjoy reading “The National Pastime” about how the internet took over everything. They were the first generation to be considered digital natives.

Of course there will be archival materials that will come out many decades from now for future historians to feast upon, so my book won’t be the last word on the topic.

I wanted A Decade of Disruption to be conversational and fun, rather than academic, and while I left myself out of the narrative (except for the Introduction), I wrote it with a lot of humor and irony. This is why this was such a dream book for me to write.

As for surprises, see my comment below about George W. Bush.

Q: How was the book's title chosen, and would you define the decade by its disruption?

A: Funny thing — the book was initially called The Lost Decade. 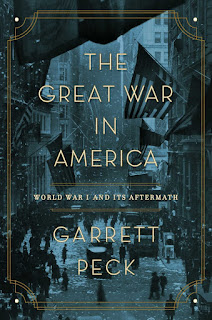 We were well into the editing process when the publisher’s sales team noted that this would be problematic, as so many people conflate the Lost Decade with the Lost Generation (the writers of the 1920s like Scott Fitzgerald, Ernest Hemingway, Sinclair Lewis, Dorothy Parker, etc.).

To their point: when people asked what I was writing on, and I told them the title of my book, they responded, “Oooh, you’re writing about the 1920s!” And I’d say, “Nooooo, I’m writing about the first decade of the 20th century.”

So at the suggestion of the publisher, we changed the title. It was an easy change to A Decade of Disruption: I had already used this term in the Introduction when I bandied about what to call the first decade.

And as it turns out, it was a fortuitous change. We are living through another momentous time of disruption in the COVID-19 pandemic, one that seems far longer-lasting than 9/11.

A: Doesn’t our current moment feel like déjà vu with the COVID-19 pandemic disrupting the economy and our lives? Didn't we go through something like this a decade ago with the Great Recession?

I hope readers take away how much disruption we all experience in our lives. The terrorist attacks on 9/11, $4+ a gallon gas, the housing bubble bursting and economic Armageddon, these were just a few of the disruptive events of the decade.

And then there were the disruptive nature of the internet, which brought so many good things like cat videos on YouTube (EDS ran a hilarious commercial of cowboys herding cats during the 2000 Super Bowl), but also proved disruptive to so many business models.

Just think about the impact that Amazon, Apple, Facebook, Google, and Netflix have had on our lives since the start of the millennium. Plus there’s the question of how much of our privacy we’ve readily handled over to the technology giants. Oh boy...

Consider as well how disruptive the Donald Trump presidency has been. I ended the book with a chapter called “History is Not Over,” which helps explain how we got to where we are today with a deeply polarized, even tribal nation. 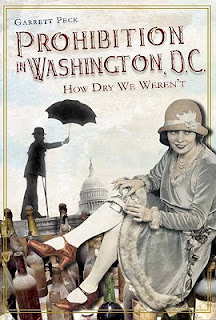 I wrote, “He drove a red-hot poker into America’s cultural fissures and fanned the flames, widening an already divided country into hostile camps.” Trump has proved to be the ultimate political disrupter.

I also want people to reconsider the presidency of George W. Bush, who was in the Oval Office for most of the years I covered. Now that more than a decade has passed, much of the partisanship of the moment has ebbed away and I think we can assess him more rationally.

I’m not an apologist for Bush, but not everything he did was bad (okay, the Iraq War was a terrible decision). People tend to judge presidents on a single issue, which is superficial and intellectually lazy.

One thing I learned about recently was that he created our country’s first pandemic playbook, which Obama in turn executed on in the first months of his presidency during the H1N1 swine flu pandemic.

Trump completely disregarded the pandemic playbook for two months, choosing the wishful thinking approach that it would simply go away, which is a big reason for the mess that we are in now.

I also appreciate that Bush never engaged in conspiracy theories, but stuck to the facts. He was a good reader who could devour a book in an evening. I wrote a section in the book that assessed the Bush presidency, which may be as surprising to readers as it was to me.

A: I’m working on a book about how Willa Cather wrote her best novel, Death Comes for the Archbishop (1927). I hope to have it out in a few years — and to build a series of tours around Cather’s travels in New Mexico.

All the sites she wrote about in the novel are real places that she and her partner Edith Lewis visited. Cather loved New Mexico, as do I. I’m extensively citing her letters, which became available to the public in 2011.

Amazon has been hugely disruptive toward the retail sector, and they will gain a lot of power during the pandemic because of Prime. Meanwhile, independent bookstores that emerged from the Great Recession regeared themselves around being community centers.

If you value this, please support your local independent. Bookshop.org can steer you toward local bookstores around the country. Go local!