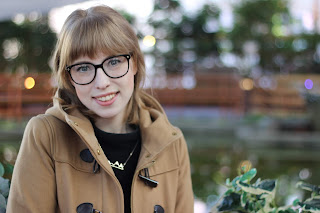 Aleksandra Ross is the author of the new young adult novel Don't Call the Wolf. She is a physician, and she lives in Vancouver, British Columbia.

Q: You note that Don't Call the Wolf was inspired by your grandparents, who were from Poland. What impact did they have on the book you eventually wrote, and how did you create your characters Ren and Lukasz?
A: They had a huge impact! My grandmother was especially important to the developing the story. After her passing, I spent a lot of time learning about Poland as a way of remembering her.

Very early, I came across a description of the Baba Jaga (BAH-bah YAH-gah) and it reminded me of the stories my grandmother had told me as a kid. The deeper I dived into Polish folklore, the more Don’t Call the Wolf began to take shape.

Ren and Lukasz came to me very early in the writing process, although they did change quite a bit along the way. In very early drafts, Lukasz was an outlaw Dragon-Slayer and Ren was a royal seamstress!

I love them very much – both Ren and Lukasz are tough on the outside, but quite soft-hearted underneath all their claws and armour. Writing about them, and building their relationship, was one of my favourite parts about this book. 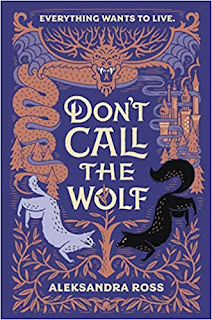 Q: Did you need to do much research to write the novel, and if so, did you learn anything that especially surprised you?
A: Yes, a lot of research went into Don’t Call the Wolf. I learned a so much about Slavic monsters, many of which are featured in the book. There’s everything from human-flaying mermaids to dragons to Baba Jaga herself.

During an early draft of the book, I also got to visit Poland for the first time, and the research I did there had a huge impact on the story. I was completely floored by the beauty and history of Poland, and I desperately wanted to showcase it in Don’t Call the Wolf.

One of the major cities in the book is based on Krakow, including a reference to my favourite pierogi window in the city. Other real inspirations include the gorgeous Tatry Mountains and a beautiful port city called Gdansk. My personal favourite, though, is the Wieliczka Salt Mine, which inspired one of the story’s most unique settings!

For me, I think the biggest surprise was just how connected I felt to my grandmother while writing. I grew up hearing so many stories about Poland from her, and she was always so proud of her heritage.

I constantly found myself wondering what she would think of certain characters and chapters, and wishing I could give her parts of the book to read and review! I really hope that she would have liked this book, and been excited by how much I learned in order to write it.
Q: As a writer and physician, how do the two disciplines coexist for you?

A: I think they coexist very well, actually! Growing up, I could never choose between a career in arts and sciences, and I just feel so lucky to be able to pursue both.

I find them very complementary, and they use different parts of my brain. I find myself using writing to reflect on medicine, but medicine has made me a much more organized writer. I used to be pretty disorganized when I created stories, but now I’m obsessed with spreadsheets and planning!

Q: How was the book's title chosen, and what does it signify for you?
A: Don’t Call the Wolf is taken from a Polish idiom, which roughly translates as “Don’t call the wolf from the forest.” It’s a warning not to go looking for trouble, which immediately felt perfect for this story. Ren and Lukasz certainly get themselves into a lot of trouble over the course of this story, and dark, woodsy atmosphere of the original idiom fit perfectly.

Q: What are you working on now?
A: At the moment, I am really trying to focus on showcasing Don’t Call the Wolf to the best of my ability. I love this book so much, and I want it to get into as many readers’ hands as possible!

I also designed and drew all of the preorder art for Don’t Call the Wolf, which was a huge task. Creating so much artwork has definitely occupied the majority of my time for the last few months. It’s been so exciting to see people’s responses to all the illustrations and preorder gifts!

In terms of what’s next for writing, I have been thinking carefully before diving into my next project. Seeing everyone’s response to Don’t Call the Wolf has been a wonderful surprise, and I want to make sure that my next project fills my heart as completely as this story did.
Q: Anything else we should know?
A: First, thank you so much to everyone who’s bought this book for themselves or a friend! It was so much fun to write, and I have loved hearing everyone’s responses.

Also, even though the preorder campaign is officially closed, I have so many more exciting things planned. There will be more art, and many more special Don’t Call the Wolf exclusives. I also created a few door prizes before all in-person events were suspended, so I will be doing some very exciting Don’t Call the Wolf giveaways soon! You won’t want to miss them!