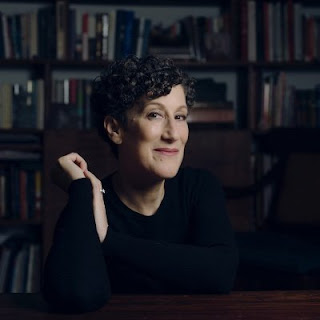 Susan Berfield is the author of the new book The Hour of Fate: Theodore Roosevelt, J.P. Morgan, and the Battle to Transform American Capitalism. She is a reporter for Bloomberg Businessweek and Bloomberg News, and she's based in New York.

Q: Why did you decide to write The Hour of Fate, and how did you research it?

A: As an investigative reporter at Bloomberg Businessweek, I’m always looking for stories with great characters who are in conflict and where the resolution of that conflict has a lasting impact.

As a first-time, would-be author, I was looking for all of that and a narrative complex and exciting enough to merit not just four thousand words but many, many times that.

Back in early 2016 there seemed to be a quickening sense of inequity and a coming reckoning for big business. There was talk of progressive policies and politics.

I started thinking about the first of these moments in America, which was in 1902. Two great characters, Theodore Roosevelt and J.P. Morgan, were in conflict over the need to hold business accountable and make society more just.

I knew my book would be a tight narrative focused on two years from 1902 to 1904 but had to provide enough context to be engaging and thoughtful. 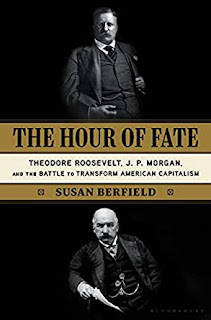 So I began my research with the many wonderful books about Roosevelt and Morgan and the entire era, about the railroads and the coal mines and steel mills that were essential to America’s prosperity, the Gilded Age, the robber barons, the labor strikes.

I dug into the archives at Harvard and Columbia Universities, the Minnesota Historical Society and spent many happy weeks at the Morgan Library and the Library of Congress. I pored over newspaper accounts from the time.

And I was able to obtain all sorts of primary source material—books, magazine articles, pamphlets—published at the turn of the 20th century.

Q: How would you describe the dynamic between Theodore Roosevelt and J.P. Morgan?

A: Theodore Roosevelt and J.P. Morgan both came from prominent and wealthy families. Though Morgan was a generation older, they knew some of the same people and shared a few friends.

But they had enemies all their own.

In 1902, Roosevelt was eager to extend the power of the presidency and the government. He was known as a reformer, energetic and enthusiastic and sometimes criticized for being unpredictable.

Morgan was a power to himself, aristocratic, stubborn, commanding, in control of more money than anyone else in the country, maybe the world.

They both thought they knew what was best for a newly prosperous America.

Roosevelt believed that the government should make sure the economy worked for everyone. He said the goal of his presidency was “the abolition of privilege.”

Morgan believed America should be a global economic power and that businessmen such as himself should be left alone in that pursuit.

The president and the financier were bound for conflict.

A: The Hour of Fate comes from a poem, “Opportunity,” that was one of Roosevelt’s favorites. It was written by a senator from Kansas, John James Ingalls, who moonlighted as a poet. Or maybe it was the other way around. Roosevelt kept a copy of the poem in his office:

“Master of human destinies am I…
I knock unbidden once at every gate
If sleeping, wake. If feasting rise, before I turn away.
It is the hour of fate.”
As soon as I read that, I knew I had my title.

Q: You write that in 21st century America, “the battle to make American capitalism more fair rages just as furiously” as it did in the period you write about. How would you compare the two, and what do you see looking ahead?

A: I wrote those last lines at the end of 2019 when many people were worried about concentrated wealth and power, just as they were in 1902.

Now I think the pandemic has exacerbated those concerns and revealed the vulnerabilities of many essential workers and others.

Of course there’s an election coming, and it’s possible that afterward we could be in another progressive moment.
Q: What are you working on now?

A: I’d love to write another book—and I’d like the main characters to be female this time—but that’s about as far as I’ve gotten.

Q: Anything else we should know?
A: If anyone would like to read the prologue to The Hour of Fate, or some of the reviews, or watch a book trailer, it’s all at susanberfield.com.