Anna Solomon is the author of the new novel The Book of V.. Her other books include Leaving Lucy Pear and The Little Bride, and her work has appeared in a variety of publications, including The New York Times Magazine and One Story. She lives in Brooklyn.

Q: You note that you were inspired by The Book of Esther and Michael Cunningham's novel The Hours in creating this novel. How did the idea for The Book of V. come together?

A: Since I was a little girl, I’ve been fascinated by the queen who comes first in The Book of Esther. Queen Vashti. She’s banished in the opening passages and never mentioned again, and I wanted to know—what did she do that was so bad? And what happened to her? So there was that mystery I wanted to unravel.

But then I also wanted to explore how our notions of a bad woman, and a good one for that matter, have and haven’t changed over time—and how we continue to reduce other women and ourselves to types. 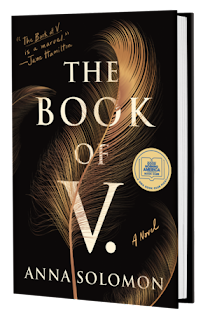 I was born in the late 1970s at moment that seemed to promise that feminism was no longer needed, that at least for some of us, white middle-class women in particular, equality had now been achieved.

But anyone who’s paying any attention at all can see that that’s not the case. I wanted to play around with what it means to be experiencing life in a way that doesn’t match up with the story you’re told about that experience.

So I decided to intertwine three stories, all about women who are living out or reckoning with an earlier story in some way. The Hours had done that, too, and so it was a great source of inspiration and courage for me.

Q: The novel takes place over three timelines, two more recent and one thousands of years ago. What kind of research did you do to write the book, and did you learn anything especially surprising?

A: I did a lot of research—on everything from contemporary international aid operations in Rwanda to social training for politicians’ wives in 1960s Washington, D.C., to life in ancient Persia.

I think what was most surprising to me—and most fruitful—was how little anyone actually knows for sure about how The Book of Esther came to be, or what life might actually have been like for Jews in ancient Persia at that time. Most of the “histories” use The Book of Esther as their main source! 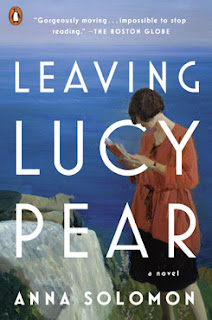 The lack of concrete knowledge gave me a lot of freedom to invent, and play,

Q: The Kirkus Review of the novel calls it a "bold, fertile work lit by powerful images, often consumed by debate, almost old-school in its feminist commitment." What do you think of that assessment?

A: I like it! I’m sure some people would be turned off by that last part, but I think of myself as old-school on many fronts, including in my feminism.

To me, the old-school feminist commitment is actually a really simple one that shouldn’t be radical to anyone who sees women as being fully human. Unfortunately, a lot of people aren’t there yet.

A: I think anyone who is interested in the complexity of women’s experiences and choice and lives will find the book resonant and provocative. 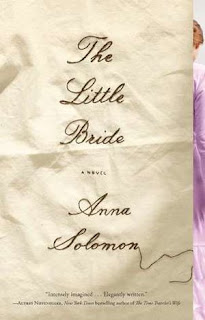 And I hope that it’s read as a call for more connection between women, and less competition. Let’s judge each other (and ourselves) less and reach out and across our supposed differences more.

A: Oh, life during the pandemic! I’ve got two kids, so there’s just a lot more daily work, and interaction, and needs. Apart from that I’m mostly focused on introducing readers to The Book of V.

But I did start a new novel in February, and I hope before not too long to be able to dive back into that.