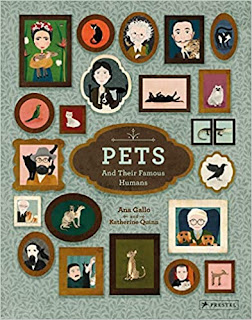 Ana Gallo is the author of the new children's picture book Pets and Their Famous Humans. Her other books include Sleuth & Solve and Sleuth & Solve: History. She lives in Spain.

Q: How did you come up with the idea for Pets and Their Famous Humans, and how did you choose the pets (and humans) to include?

A: The idea was suggested to me by my editor from Zahorí Books, the Spanish original publisher of the book. She explained to me that the idea came up when she read an article about the importance of Freud's dog during his psychiatric consultations.

This fact made her think about the relationship of animals with humans and I wanted to study the different cases of important personalities in history that had a pet.

When she asked me to develop the idea, I did not hesitate. I am an animal lover! (I belong to a family line of veterinarians) and I enjoy writing about topics that move me.

Then we studied the project together and we produced the list, choosing the most interesting real stories and the most relevant special links between animals and humans.

A: Because most of the personalities chosen are no longer alive and even belong to other centuries, such as Newton, the main sources were biographies, letters written by [people close to them], or their own testimonies.

Among the most recent celebrities, such as Andy Warhol or David Hockney, I also discovered their stories with their pets through interviews. It was as if I really could hear them.

But there aren’t as many testimonies as one would wish, so I also had to seek those moments of intimacy through pictures taken of pets and their owners. 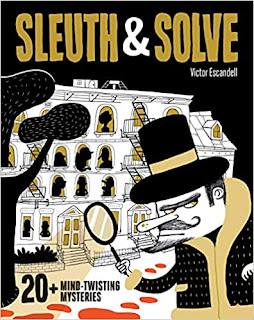 Some of them give me a broader vision about how special that tie was and reflect a deep affection, such as the picture of Klimt with Klatze in his arms or the one of Frida Kahlo reading in bed with a deer and one dog at her side sharing the same bed!

In the case of some artists, their works also show these bonds between their pets and themselves.

Some show clearly the important presence their animals had in their everyday life--for example the paintings of David Hockney’s dogs and Paul Klee’s cats.

Others made their pets a leading presence in their literary creations, as Dickens did with his raven Grip, that he made a character in one of his novels, or T. S. Eliot with the children’s poems about naming cats.

It surprised me that pets matched with owners. For example, Dickens found an animal skillful with words, Mozart one that had musical sensibility, and Dali one that was impressive enough for his wild beauty that helped with his presence to made the artist a more bizarre character, if possible.

I dare say that we can enjoy many artworks thanks to the atmosphere pets created with their presence around the artists, because they gave them the love they needed in lonely moments and also distracted and amused them, as Lump used to do with Picasso.

Some never allowed other people to go into their studios; however, they let their pets be around them and did not get upset if they put their paws into the paint or make a real mess as Newton’s dog did.

A: All the stories have a short introduction about the childhood of these characters who contributed so much to the world.

With it I hope young readers learn that even in the worst conditions, one must discover their abilities and stay with them all their life. When you discover the object of your interest it becomes the strength that leads you through life.

Art and pets help all of us to communicate and express our inner self. 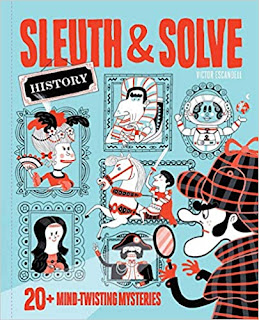 My intention has also been to arouse readers’ curiosity enough that they would wish to discover more about these famous people and their art works. I hope all these pets become a bridge to make readers approach art and science.

I have tried to create images in readers’ minds that connect some of the most important art creations with domestic scenes. If you imagine paintings that cost millions of dollars stepped on by a cat or a curious dog as happened with Klimt’s, Klee’s, or Picasso’s animals, you feel it more real, much closer than on a museum wall.

Imagine some comic and familiar scenes where Mozart is composing the fairy tale The Magic Flute while his starling repeats the music the whole day, or try to see Dickens writing Oliver Twist listening his raven’s funny words at the same time it gave those typically two-footed hops between steps around Dickens’ writing desk.

Q: Do you see any common themes running through these stories of pets and humans?

A: I see most of the times pets become what you need. In some way they help us to be more balanced. There are as many different relationships between both species as they are between humans themselves.

I mean, for Virginia Woolf, her dog was a typical friend-nurse who stayed besides her bed when she was depressed and listened stoically to her ideas while they walked together.

For Picasso, Lump was like those lively friends always willing to have fun and distract you because they think you are working too much.

For Paul Klee, [his pet] was a close friend who always calmed and would listen to him, that kind of good friend you write a letter to in your last days, as he did to Bimbo II.

Besides, I wanted to underscore that once these artists found their special passion for evolving in life they persisted with it.

Sometimes parents push their children towards professions kids don’t even know whether or not they like, as happened with Matisse, just because we think—with all our heart, of course—that way is a guarantee for their economic well-being.

Matisse discovered thanks to his mother that he loved painting, and although his father was angry and told him he would die from starvation, he followed his own way and became one of the greatest painters of the past century.

A: I’m finishing the next book of a challenge your brain series (Sleuth & Solve). This will be the fourth title of an amusing and successful collection, translated into eight languages.

Each one is dedicated to a subject: mystery, history, and horror stories. All are illustrated by the renowned Spanish illustrator Víctor Escandell, whose studio proposed the original idea to Zahorí Books, the Spanish publisher.