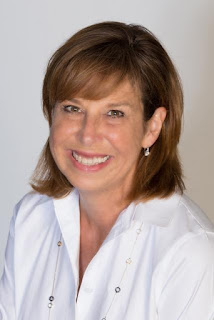 Barb Rosenstock is the author of the new children's picture book biography Leave It to Abigail!: The Revolutionary Life of Abigail Adams. Her many other books include the new picture book Fight of the Century: Alice Paul Battles Woodrow Wilson for the Vote. She lives in the Chicago area.

Q: Why did you decide to write a children's picture book biography of Abigail Adams, and what do you see as her legacy today?

So I made a conscious effort to focus on some female characters from history. I almost ignored Abigail, though she is sometimes considered America’s first feminist, because all I’d really been taught about her was that she hung laundry in The White House. I had learned in school that she was a housewife, a supporting player, kind of “not worthy” of a book.

And then I started researching in depth…and learned she was a great writer, an open-minded teacher, a committed patriot, a feeder of troops and maker of bullets, a businesswoman, a farmer, you name it, Abigail could do it. John Adams, as a Founding Father, does not exist in history if not for Abigail Adams, Founding Mother. 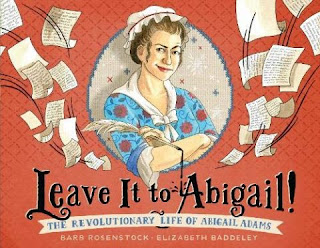 A: I read a lot of books, of course, and much of Abigail's copious correspondence. But it was in visiting the Adams Historical Park in Massachusetts and seeing Abigail’s daily life that the book came together.

What surprised me most was how modern Abigail seemed at every turn. She juggled business, friendships, marriage, children, politics, and made it look effortless…plus her warmth and humor comes through in her writing. You were lucky if you could call Abigail Adams a friend. I was lucky to research her life and meet the historians who are preserving her work and legacy.

Q: What do you think Elizabeth Baddeley's illustrations add to the book?

A: I always say that the key to writing a picture book is writing HALF the story…the other half is for the illustrator. I try to leave room in the book for the art to work out its own details.

Elizabeth brought to life all the emotions and period details of Abigail’s colonial world that would bog down the text. And she accomplished the ultimate, this is (as far as we know) the first book of all time to actually have cross-stitched endpapers and spot art.

Elizabeth is not only an accomplished illustrator, she decided to honor Abigail and women’s work in general by stitching the art by hand. WOW! Take a look, you’ll be blown away! 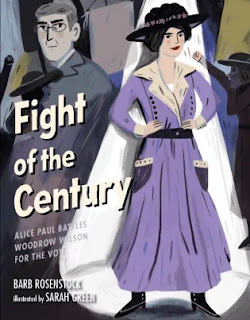 Q: You also have a new picture book out called Fight of the Century--what can you tell us about that book?

A: Again, those grade school girls got to me! As if 2020 hasn’t been exciting enough, it is also the anniversary of the ratification of the 19th amendment which gave women the right to vote.

In Fight of the Century, I tell the story of Alice Paul’s fight for women’s suffrage. The person she was fighting against was the president of the United States, Woodrow Wilson.

Alice and her group used peaceful protest tactics (among the first time in the U.S. that peaceful protest was used to influence a sitting president) and led the first group to ever picket the White House. Woodrow fought, Alice fought harder, and won!

The book is set up like a boxing match. Alice believed in her cause and she was on the right side of history.

A: I have picture books coming out on the artist Monet (with Mary Grandpré), Monarch butterflies (with Erika Meza), and life in the Sargasso Sea (with Katherine Roy). I’m noodling around with elephant science, Picasso, spiritualism, and ocean migrations, so we shall see.

A: Please honor our Founding Mothers and those who fought for our suffrage and VOTE in 2020! Also, please support the justice and civil rights causes you believe in. Our country’s future depends on active, engaged, participating citizens.