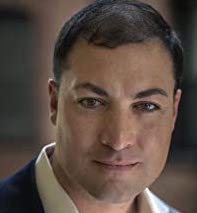 Sean McFate is the author of the new novel High Treason, the third in his Tom Locke series, which also includes Shadow War and Deep Black. His nonfiction books include The New Rules of War. He is a professor of strategy at the National Defense University and Georgetown University, and he's based in Washington, D.C.

Q: This is your third novel featuring your character Tom Locke. How did you originally come up with him, and do you think he's changed over the course of the series?

A: The Tom Locke series began as an accident. Originally, I wanted to write a memoir about a mission I did for the U.S. government as a para-military contractor in Africa, but my agent said: “No, no, noooo! If you do that, you’ll be sued to death.”

So we fictionalized it, and Tom Locke was born. His name is a combination of two of my favorite philosophers: Thomas Hobbes and John Locke. 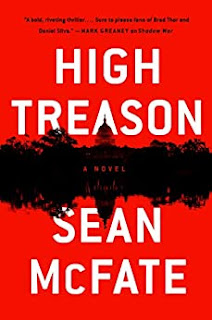 Tom Locke is me, had I remained in that world. Except he’s more bad ass and soul damaged. But Tom has changed over the series; he’s rediscovered his soul and is now a mercenary Robin Hood, although sometimes reluctantly.

Q: What inspired the plot of High Treason, and did you know how the novel would end before you started writing it?

A: The first two books were set overseas, and I wanted to bring Tom Locke home. High Treason is set in Washington, D.C., which has been my home base for 20 years. It's a Washington action thriller by a Washington insider.

Nothing is worse than reading a spy thriller by someone who doesn’t fully understand how the CIA, Pentagon, White House, and others actually interact, what they care about, and how they talk.

Plus, there’s K Street and the Hill, utterly separate ecosystems. No one wants to read about the Georgetown subway stop and other made up geographical features. There’s plenty of dog whistles for D.C. denizens. 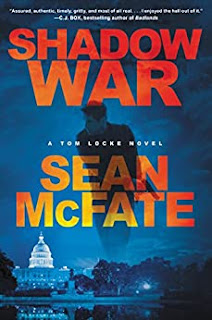 Q: In addition to writing novels, you're also a professor of strategy and you were a U.S. Army officer and a military contractor. Can you say more about how those experiences factor into your fiction writing?

A: I spent eight years in the army, most of them as a paratrooper at Fort Bragg. Then I hopped to “the dark side,” and went private sector.

In the beginning, I worked only U.S. government contracts, and did things the CIA or special operations forces couldn’t or wouldn’t do. I left that world when I looked and realized there was no one old in my business.

Now I’m a professor of strategy at the Georgetown University and the National Defense University, the Department of Defense’s premier military war college. I teach colonels how to fight and win wars. I write a lot of serious nonfiction in addition to my novels.

My writing is thinly veiled reality, and my life experiences are fertile ground for fiction. I use fiction to reveal truths about shadow wars people do not see. It compliments my serious nonfiction on emerging geopolitics and power. My readers have fun but learn something too. 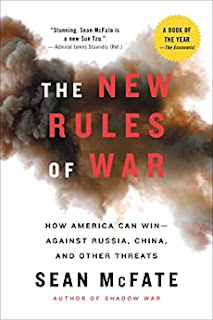 Very few people can write good fiction and nonfiction because it’s darned hard to do. After I finished my nonfiction book The New Rules of War, I thought I would take a week off and then start Tom Locke.

Boy, was I wrong. It took me two months for my brain to switch. I still don’t understand why. However, my craft as a fiction writer vastly improved my nonfiction books.

The New Rules of War has the intellectual heft of an Oxford University Press book but reads like a fun magazine article. It goes down easy, but readers come away with significant new understanding.

Q: Given the fast pace of today's news events, is it difficult to write thrillers set in Washington, D.C., and have them be as current as possible?

A: Treason never goes out of style. Nor does ambitious, corruption, and hunger for power, themes that date back to the epic of Gilgamesh in the bronze age. Somethings in the world change, like technology and medicine, but human nature does not. 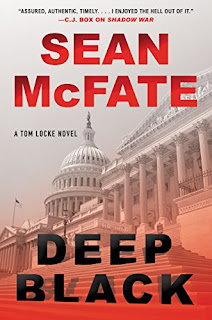 A: Good question. I’m pondering the next Tom Locke novel, but also another serious nonfiction book about global chaos.

A: All my novels feature strong female characters, something I think the genre needs more of. When I was in the field, I ran into women warriors all the time, and they were not “men with breasts” as they are sometimes portrayed. They were truly feminine and strong warriors. I can’t describe it, so I write it.

Jen Lin is my favorite, though. She’s a young FBI agent who doesn’t have time for procedure when chasing her quarry. She’s really the co-lead, and High Treason is as much her story as Tom Locke’s.

High Treason is a cautionary tale about national security. When most people think about threats to the United States of America, they imagine foreign superpowers pointing missiles at North America.

While this is bad, it’s not the worst threat. Countries like Russia, China, and others now reach inside our country and try to implode us from within, using secret and devious means. High Treason shows one way how.

I like to write novels that readers will find rollicking fun, but also those that they can learn something from. In the case of High Treason, it’s about how we are vulnerable from inside threats more than outside ones, and they are not what people expect.