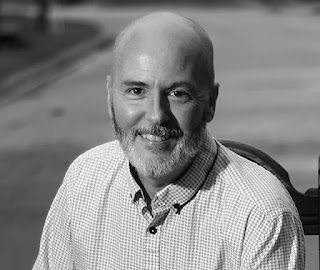 Timothy S. Miller is the author of the new novel City of Hate. He lives in Dallas.

Q: How did you come up with the idea for City of Hate, and for your character Hal Scott?

A: I knew very little about Hal when I started writing City of Hate. I knew I wanted to write a novel with an unreliable narrator caught up in a series of events that are bigger than himself. Sort of the Everyman thrust into a world in which he has very little control.

I think it was Stephen King who said you need to put a dead body on the first page, so that’s what I did. And then I just went from there.

Lee Montgomery Pickens is the self-proclaimed bastard son of Lee Harvey Oswald. Lemon’s story is really the story I wanted to tell.

But I didn’t want to tell the story from Lemon’s point of view. I wanted the reader to discover Lemon’s story a little at a time. I thought that putting the reader in Lemon’s head for the whole novel would be too much.

So you take two loners and put them in the middle of a conspiracy involving the assassination of JFK, the future governor of Texas and you throw in the mean streets of Dallas, Texas, and you get the City of Hate. 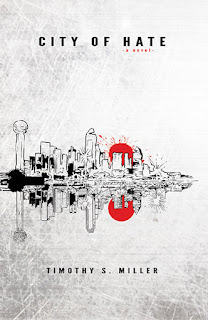 A: This is a book about outsiders. Most writers – myself included – know their fair share about alienation. Feeling alone in a room full of people. Addicts and conspiracy theorists have that same feeling. You might say I did a lifetime of research for this novel.

And I did my share of researching conspiracy theories. There are a ton of conspiracies out there involving the assassination of JFK, and I definitely spent some time digging through all of them.

I think the most surprising thing to me is how interested people still are in the death of JFK. Everybody has their own take on it.

Q: The book takes place in Dallas. How important is setting to you in your work?

A: Dallas isn’t exactly known as the epicenter for noir, although we have our fair share of very talented crime fiction writers. But it’s not like L.A., Chicago, or New York, in terms of crime fiction and urban noir.

With that said, there is nothing more noir than the assassination of John F. Kennedy. Dallas was given the infamous moniker City of Hate shortly after Kennedy’s assassination, and we still haven’t gotten out from under it.

And the story is filled with mobsters, femme fatales, and a corrupt government. What more could you want in a crime tale?

While I grew up in the suburbs, I’ve lived most of my adult life in the city of Dallas. And I can’t imagine setting the book anywhere else.

Dallas is still best known for the Dallas television show of “Who Shot J.R.?” fame, and the assassination of JFK. My mother – in her early 20s at the time – is actually featured in one of the famous photographs of the presidential motorcade that was taken only minutes before Kennedy was assassinated.

And of course, I heard her stories over and over growing up, and I always knew that I would write a novel where that pivotal event played a major role.

It doesn’t hurt that Texas – Dallas in particular – is a good example of the great divide between the rich and the poor. Dallas has a booming economy, but it has done very little to enrich the lives of the working class and working poor.

While I don’t think this book is an attack on family values, it definitely holds the hypocrisy of conservative politics – and corrupt politicians in general – up to the light.

A: I admire all authors, but I have a soft spot for genre writers that stretch the boundaries of genre fiction.

Stephen King mentioned Jim Thompson in an interview and I immediately fell in love with Thompson’s work. City of Hate would be a totally different book had I not stumbled on to The Killer Inside Me, Savage Night, and Wild Town.

But when I read Thompson’s work, you can tell that he was censored. While he pushed the boundaries as far as he could for the time, I wanted to do more. I feel like the crime genre is definitely a good genre for pushing boundaries.

A: I’m working on a more traditional hard-boiled novel set in Dallas featuring a former homicide detective working in the Missing Persons Division of the Dallas Police Department. Yet again, my characters find themselves in over their heads with very little prospect of getting out alive.

I told myself that I would play it safer with this one. Where City of Hate is quite graphic, this one would leave more to the imagination.

Turns out, I was wrong. I’m not about being graphic for the sake of being graphic, but I also think that crime novels should at least be as raw as the real world. There are times to leave some things to the imagination, but I would rather not.

I’m aware that you risk alienating your readers when you’re too graphic, but I’m also aware that there are readers out there who want to feel the whole experience. I like books that wrap me up in their world. And since I write crime novels, things are going to get sordid and out of control.

A: While my work doesn’t necessarily fit into any one genre, crime fiction suits me well. I’m glad to be working in a genre that allows for so many disparate voices and imaginations. Noir and hard-boiled fiction is everywhere these days, and it’s fun to be a part of it.

With that said, I’m a firm believer in the fact that all literature is a detective story. There may not be a dead body, but there should always be a mystery. At its core, City of Hate is about two loners who find themselves in the middle of a conspiracy that is ready and willing to eat them alive, and they have to fight their way out.