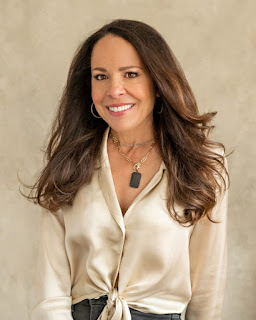 Lisa Barr is the author of the new novel Woman on Fire. Her other books include the novel Fugitive Colors. A journalist, she has worked for a variety of publications, including The Jerusalem Post and Today's Chicago Woman. She lives in the Chicago area.

Q: What inspired you to write Woman on Fire, and was the painting at the center of the book based on a real work of art?

A: My new novel, Woman on Fire, was inspired by my fascination with the complicated issues surrounding Nazi-looted art, which was also a powerful theme in my award-winning debut historical thriller Fugitive Colors.

I’m a news junkie and when I read about the Cornelius Gurlitt art scandal – known as “The Munich Art Hoard” – exposed in 2013 – I knew I found the “nugget” for this book.

More than 1,500 major paintings worth approximately $1.4 billion were discovered hidden for nearly 50 years in the rundown Munich apartment of one Cornelius Gurlitt.

His father was none other than Hildebrand Gurlitt, Hitler’s “art thief” – the premier dealer of Nazi-looted art who, when he died, bequeathed his massive treasure trove to his reclusive son who literally hid masterpieces in a food pantry, and even inside his stove.

When I first read the exposé, I knew I wanted to focus my book on a singular stolen painting that affected many lives. It would force my characters to do unspeakable acts – even risking their own lives to reclaim this masterwork – because it was personal.

Woman on Fire is indeed a fictional painting, based on the work and technique of the Expressionist movement that began in Germany. This painting evokes family history, pain, loss, life, war, and love.

My goal was to use this singular canvas to represent the nearly 650,000 works of art that were stolen, confiscated, and destroyed during the Nazi regime.

Q: How did you create your characters Jules and Margaux?

A: I wanted to write a novel that combines all my favorite elements of literature: history, art, suspense, passion, risky journalistic pursuits, and most of all, strong, complex women.

I also wanted to feature a woman-vs.-woman showdown. Each equally passionate, each believing her own truth, each pursuing and positioning her story, her narrative – her way. 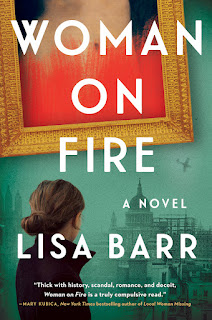 Jules has a lot of “me” in her – particularly back when I was a young, fearless investigative journalist. To be honest, I miss it. So, I thought, if I can’t have it – then I damn well am going to write about it.

And Margaux – evil, brilliant, wounded, ruthless – was so fun to write.

Jules and Margaux couldn’t be more different, but they match based on their passion, strength, and survival instincts.

Q: Author Alyson Richman calls the book “a story that forces readers to question where the line should be drawn between the pursuit of justice and the hunt for revenge.” What do you think of that description?

A: Alyson is not only a brilliant writer, but also her words truly capture the essence of my novel.

The underlying question in this novel is: How far would you go to find a painting, to uncover its truth, to avenge what was lost? If you asked that question to each of my main characters--no spoilers here, but they would all say they would go the distance and then some… And there’s danger in that.

I wanted to explore in-depth this obsessive hunt and its consequences.

A: This book is not simply about reclaiming a painting, but what this artwork from this dark era embodies. This painting is not a still life, a fruit bowl. It represents the systematic persecution and destruction of modern art and artists.

The incredible thing to note is that nearly 80 years after the war, this story is still front-page news. It is what remains now that most of the survivors of the Holocaust and the Nazi perpetrators have passed. The art, the legacy steeped in culture and creativity, lives on despite the atrocity of the Holocaust.

A: Every time I try to “leave,” WWII pulls me back in. I’m now working on a story about a famous actress and her secret past during the Warsaw Ghetto Uprising.

A: It’s no secret to those who have read my work that I’m a “genre jumper.” The Unbreakables and Woman on Fire couldn’t be more different. But the thread that ties all my books together is art and passion. This moves me, inspires me, drives me and my characters.