Willard Sterne Randall is the author of the new book The Founders' Fortunes: How Money Shaped the Birth of America. His other books include Ethan Allen: His Life and Times. He is a distinguished scholar in history and professor emeritus at Champlain College.

Q: What inspired you to write The Founders' Fortunes?

A: I decided to write this book when I couldn’t answer a question a friend of mine kept asking me: how did the money work in the American Revolution? After writing half a dozen biographies and other works on the founding era, I could not give him a clearcut answer. And most of what I read avoided the question or spoke vaguely.

Poring over old documents is my lifelong habit. I can’t tell you how many times I’ve read the Declaration of Independence, but there are still surprises. Once you get beyond Jefferson’s brilliant philosophical opening, it is easy to miss some other mighty lines. The final line was “We pledge our lives, our fortunes and our sacred honor.”

What exactly were their fortunes? What impact would they have on the unprecedented decisions they would have to make to shape a new nation?

Q: The Booklist review of the book says, “Randall shows how the Founders’ finances influenced their economic and political decisions, from the French and Indian War to John Adams’ presidency.” Can you say more about the connections between their finances and their decisions?

A: It was possible to find direct connections between the wealth of the figures I studied. At the end of the French and Indian War, the colonists expected to be able to settle the lands that France had ceded, only to have the British draw a line down the  spine of the Alleghenies beyond which they were barred.

Washington and Franklin were among score of wealthy colonists who invested heavily – and had helped the British to win – those rich lands.

As the British passed a slew of new laws and taxes, every American was eventually affected, especially plantation owners like Washington who had to ship their crops to England on English ships with English crews, pay up to 75 percent of their profits in fees and customs duties and then buy all manufactured goods at high prices from the English.

Washington had to import hoes, hats, nails, any finished goods, much of which arrived damaged. He joined other planters and merchants in  organizing boycotts that led the British to repeal some taxes and brought them together in congresses.

Franklin had become rich as a printer and publisher, investing his profits in 89 rental properties in Philadelphia, but the pacifist Quakers would not defend them and the Penns who owned the colony would not spend any money.

So Franklin organized and armed militia, built forts, and wrote a Plan of Union for intercolonial defense that became the confederation form of government. 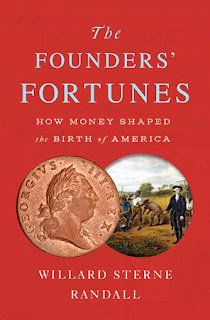 To go back to the Declaration of Independence, the first grievance against the Crown that Jefferson, Franklin, and John Adams enumerated was that Britain would not allow American colonists to have banks or their own currency. This leapt out at me!

When Sam Adams’s father formed a land bank in Massachusetts, the British government ordered him to dissolve it and pay back all the money himself, leaving him bankrupt.

He had to tell his son he would have to drop out of Harvard. The youth instead waited on table and graduated--with a lifelong hatred of the British.

John Hancock, the wealthiest New England merchant, became the target of customs agents for importing goods that had once been duty-free. The stroke of the king’s pen had turned America’s merchants and shipper into smugglers. When he defied customs officers, his ships were seized, sometimes chased by the Royal Navy.

Hancock and Adams were the only Boston tax resisters refused amnesty from arrest for treason when the British attacked Lexington and Concord, looking for them.

Together, they fled to Philadelphia and took their seats in the Continental Congress to vote for independence. Hancock brought his fortune with him in cash and notes to finance the Revolution.

Q: In the book's prologue, you discuss the work of historian Charles Beard more than a century ago. How do you see your work in connection with his?

A: This brings me to Charles Beard’s 1913 economic interpretation of the Constitution. After Americans had been weaned for a century on adulatory tales of the Founders, Beard was writing in an age much like our own, with enormous inequality of income, vituperative politics splintering political parties and supported by corrupt machines.

Beard toppled the Founders from their pedestals and went through their pockets, finding them stuffed with Revolutionary War bonds they has obtained for pennies on the dollar from cash-strapped veterans on hardscrabble frontier farms.

He concluded that the delegates to the Constitutional Convention were in it for the money, expecting to create a financial system that would favor and reward them enormously.

I decided to test the theory by studying the individual delegates, what exactly they had invested, and what they actually gained when Hamilton’s national bank exchanged the old discounted bonds for new at full value.

What I found was that five of the 55 delegates had more invested than the other 50 combined and that, on the whole, I agreed with financier Robert Morris, who had risked his entire fortune on the Revolution only to end up in debtors’ prison, were “plain, honest men.”

Beard’s hypothesis launched the Progressive School of historians and long was unchallenged. But I found vast troves of records and documents that are now available to scholars not available in Beard’s time, giving historians like myself plenty to re-examine that can add to understanding our own tumultuous times.

That is why I am continuing, in my next book, to study the first congresses, their strengths, their fragility and they partisan political system they so quickly spawned.