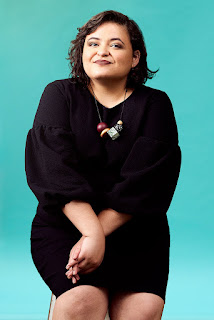 Aline Mello is the author of the new poetry collection More Salt Than Diamond. She was born in Brazil and moved to the United States as a child. She is a graduate fellow at The Ohio State University's MFA in creative writing program.

A: I started writing poems in 2017 after Donald Trump was elected president. Over the next few years, I wrote poems for the good of my own mental health. I was working in a religious environment that was becoming more and more rigid, anti-immigrant, and pro-Trump, and this affected me a lot. I needed the poetry, and wrote one almost every day.

It was only in 2020, when I was being mentored by Paola Capó-García, that I realized I had enough poems for a book and we started editing them with that in mind.

Q: How did you decide on the order in which they would appear?

A: I actually had no idea how to do this. Chronologically? Thematically? Should I divide them up into sections? These are all questions I needed to answer, but that I didn’t even think to ask. Seeing my poems grouped together into a manuscript was already jarring enough. I was able to hire Neil Aitken to help me sort through them.

The big decision I made was that in the middle, I would have three poems that would show movement from one perspective to another: “Prayer,” “Prayer or Blasphemy,” and “Blasphemy.” After deciding on this, it was easier for me to divide them into two groups. Neil helped me with the rest.

Q: The poet Christopher Soto said of the book, “If there is an American dream, there are also American delusions. Aline Mello shows us how ‘beyond the wall / there are only more walls.’ When pushed against language, law, and country this poet builds a refuge out of prayer, hope, and family.” What do you think of that description? 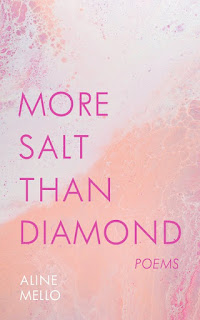 A: I really like how Christopher Soto was able to engage with so much of the despair in the poems, while still finding shelter and hope. Seeing the way people respond to my poems makes me respond to them differently as well.

Many times, when I look at poems I wrote a while ago, I am prone to only think of the negative, the ongoing displacement. So it takes someone like Soto saying that I build a refuge for myself in my poems to help me realize that it’s true. Poetry has very much been a necessity in my life, and it’s good to think that I’ve created something like safety for myself through poetry.

A: The title decision was collaborative. I had two close friends over and we read through the poems, choosing favorite moments, words that stood out to us. After narrowing it down to three, we made word association trees to see if we could move away from the words themselves. We ended up coming back to the favorite phrase “more salt than diamond” whenever we’d try something else.

To me, “more salt than diamond” means many things. I am someone who’s tired of being called resilient and strong. I am not bulletproof, and when I compare the durability and strength of diamond (also my birth stone) to how salt crumbles, spreads, melts, dissolves—I am much more like salt. Though I’ve had to be tough like a diamond in my life to survive, it’s always been a survival tactic. It’s not how I really am.

The other meaning is flavor. I like how, though salt dissolves and falls apart, it affects what’s around it. It responds to its environment and changes how things taste—something diamond can’t do.

A: I have been working on a young adult novel about an undocumented Brazilian girl for what seems like forever. I hope to finish it in the next year or so. I’m also working on my second book of poetry. Other than that, working on embroidery and trying to read all the graphic novels.