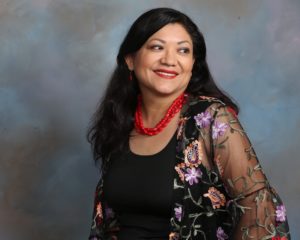 Reyna Grande is the author of the new historical novel A Ballad of Love and Glory, which focuses on the Mexican-American War. Her other books include the memoir The Distance Between Us. She lives in Woodland, California.

Q: What inspired you to write A Ballad of Love and Glory?

A: Like most of us living in the United States, I knew little about the Mexican-American War, or the U.S. invasion of Mexico in the 1840s.

For many years I’d wondered why this defining event in U.S. history—when the country doubled in size by taking Mexico’s northern lands—had been erased from our collective consciousness.

But what led me to start writing this book was learning about the existence of the Saint Patrick's Battalion, a group of foreign soldiers—many of them Irish, who during the war deserted the U.S. Army and switched sides to defend Mexico. I wanted to learn about these soldiers and was especially fascinated by their leader, John Riley.

I admit I was quite intimidated by this project. I had never seen myself as someone who could write about war, soldiers, battles, politics. But as a writer, I really like to challenge myself with each new project I undertake. So I stepped out of my comfort zone and gave it a shot.

Q: You've written, "It has been said the Mexican-American War is the war that the US cannot remember and Mexico cannot forget." What are some of the most common perceptions and misconceptions about the war?

A: My feeling is that people here in the U.S. don’t know enough about this war to really have any thoughts on it. It isn’t taught in school. Somehow the Mexican-American War gets skipped over.

Which begs the question: why? Why don't we learn about the war that led to the U.S. doubling in size? The war when, for the first time, the U.S. fought on foreign soil and the first time it occupied a foreign capital. The war that set the stage for the Civil War. It is such a big moment in U.S. history, so why is it omitted?

Maybe we don't want to face the uncomfortable truth that this was an unjust war, a war of aggression driven by American greed, desire for more land, and white supremacy.

But the misconception that arises from not knowing this history is that Mexican-Americans are seen as perpetual foreigners or “new immigrants” instead of recognizing that they are a people who have deep roots in these lands and who were here before Mexico’s northern territories were taken by force by the U.S.

Q: How did you create your characters John Riley (based on a historical figure, as you mentioned) and Ximena, and what did you see as the right balance between fiction and history as you wrote the book?

A: John Riley is a real historical figure but Ximena is based on a poem written by John Greenleaf Whittier.

With Riley, I learned as much as I could about him, but there isn't a lot that we know of his personal history. What we know is from a few letters that he wrote.

The military records revealed when he deserted the U.S. Army, which battles he fought in, when he was captured by the Americans, his trial, the sentences he and his men received. I read about the public hangings and floggings and his time in prison.

I tried to stick to his true story as much as I could. It was rumored he might have been in love with a Mexican widow. So this is where my female protagonist comes in! 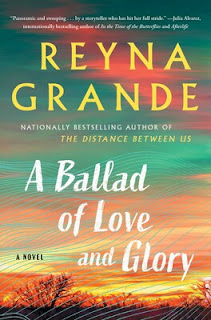 Even though she is a fictional character, Ximena is deeply grounded in the real experiences of Tejano families. Through her story I wanted to capture what it was like for Tejanos to get caught in the middle of the Texas Rebellion and the Mexican-American War and explore the theme of divided loyalties.

I loved being able to dig into the history of the Texas Revolt and the role that Tejanos played in that, the price that they paid for Texas' independence, for betraying Mexico, and how many of them, like Juan Seguin, were run out of the new republic in shame and disgrace.

The story of Tejanos is quite heartbreaking. Even to this day, their contribution to Texas independence and their place in Texas history still hasn't been acknowledged enough.

A: I lost track of how many books I read. But it is easily more than a hundred. I started by reading three books about John Riley from historians Robert Miller, Peter Stevens, and Michael Hogan.

Then I read many history books available on the Mexican-American War. I read books about the history of Texas. I picked up a few books on Santa Anna, including his memoirs and the memoirs of Juan Seguín.

From there, the research was more specialized--the flora and fauna of South Texas/Northern Mexico, books and blogs on cockfighting, curanderismo, military tactics and artillery warfare, life on a ranch.

I read a lot of diaries and letters, mostly from U.S. soldiers (there weren't a lot of first person accounts by Mexicans). I read about Ireland and the great famine, and a lot of 19th century literature, in particular stories about the peasantry by William Carleton and others.

I also consulted with Irish historians and went to Ireland as well as to Mexico to the battle sites, the Rio Grande, and all the way to Santa Anna's hacienda (which is now a museum) in Veracruz.

Everything surprised me! I knew almost nothing about this time period or this war.

But I guess what stayed with me the most was learning that when the U.S. Congress declared war on Mexico in May 1846, it was based on a lie—a lie by their own president.

My novel aims to make readers question what they think they know about Mexico and U.S. relations, about our southern border, and about the Mexicans living in this country. My novel aims to debunk the myth that Mexican-Americans are foreigners.

Writing this book was such an empowering experience. Growing up Mexican in California was so traumatic, and it deeply impacted my sense of being, my identity. I was ashamed about my Mexican roots, about speaking Spanish.

But learning that California, the state I called home, was once a part of Mexico and that Spanish was spoken here first before English made me feel less of an outsider, less ashamed of my mother tongue. Less othered.

So writing this novel was an act of uncovering the history I didn't know about Mexico and the U.S., and understanding how I fit into this history made me realize I wasn't as much of an “outsider” as this country would have me believe.

A: I have a book coming out in June 2022, an anthology I co-edited with poet Sonia Guiñansaca. It is called Somewhere We Are Human: Authentic Voices on Migration, Survival, and New Beginnings. Everyone featured in this anthology are undocumented or formerly undocumented Americans.

Also I am still debating whether or not I want to write a follow-up to A Ballad of Love and Glory that will focus on the aftermath of the war and the fate of the 115,000 Mexicans living on this side of the border who woke up one day to discover the border had crossed them--and who became second-class citizens.

A: My memoir, The Distance Between Us, is turning 10 this year and it is getting a 10th anniversary edition with a new cover! Sandra Cisneros is honoring me by writing the foreword for the new edition and I will be writing an afterword. I can't believe it's been 10 years already. That book really changed my life.