Shelley Puhak is the author of the new book The Dark Queens: The Bloody Rivalry That Forged the Medieval World. She has written several collections of poetry, including the forthcoming Harbinger, and her work has appeared in a variety of publications, including The Atlantic and Creative Nonfiction. She lives in Maryland.

Q: You note that the initial spark for The Dark Queens came from a Viking helmet you saw while searching for a Halloween costume. How did that lead you to write this book about two 6th century queens?

A: I knew that these Viking helmets were not historically accurate and I was vaguely aware they had something to do with how Vikings were portrayed in Wagner’s Ring opera cycle. This opera is the one that gave us the stereotypical figure of a busty woman with braids, a shield, and a horned helmet— the character Brünnhilde.

Around the same time, I was working on another project where I encountered a mention of a decades-long rivalry between a Queen Brunhild and her sister-in-law Queen Fredegund. I had never heard of these two queens and had been intrigued at the time. But my curiosity was really piqued when I realized that my Halloween costume and the fictional character in Wagner’s opera were also linked to these two women’s lives.

The more I learned about these two queens, the more stunned I was. How was their story not more widely known? When I realized they had been purposefully erased, I became committed to finding a way to tell their story.

Q: You write, “This book is not an academic history; it is a work of narrative nonfiction based on primary sources.” Can you say more about the book's format, and about how you researched the period?

A: The Dark Queens is researched like an academic history would be: my bibliography covers works in four languages, for example, and the endnotes run 50 pages. I also made use of a fact-checker, an academic who is a specialist in the period, which was incredibly helpful.

But I thought it was important to give myself permission to use inference or speculation, especially because this book is about the lives of two women.

When we read in a history book, for example, “the knight rode into battle,” most of us have no trouble picturing that in our minds. We’ve all seen movies and TV shows, or visited museums or Renaissance fairs, that allow us to fill in some of the blanks. We can see the heavy armor, the waving standards, and hear the horses rearing back, the hoofbeats, the clang of swords.

But if we read about a queen riding into battle, for example, do we have the same sense of what that looks and sounds like?

Surprisingly, a lot of details about these queens’ lives have survived. So when I incorporate dialogue, for example, that is actual dialogue that was reported by a 6th-century eyewitness. There are also accounts of people’s emotional states—people being enraged or irritated, for example. 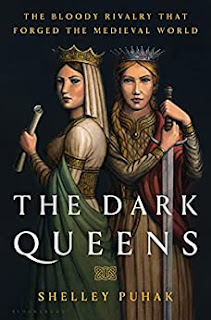 But sometimes I had to make a leap. What would you be likely to feel, for example, if someone you were close to was assassinated or died in an epidemic? When I made educated guesses, I tried to be transparent and signal this with “likely” or “probably.”

Q: How would you describe the relationship between Brunhild and Fredegund, and what do you see as their legacy?

A: I’d characterize their relationship as a political rivalry. While Brunhild and Fredegund had different individual strengths— one seems to have been better at diplomacy, for example, and the other at military strategy— overall they were more alike than different. They shared a grudging respect for one another.

Their influence on Western Europe has been largely overlooked, although both certainly left their mark. One, for example, was instrumental in the Christianization of Britain, while the other became a savvy military leader, even influencing a key scene in Shakespeare’s Macbeth.

But, most chillingly, the backlash against their reigns would shape Europe for many centuries. It led to greater fundamentalist streak in the Church, which eventually snowballed into the Crusades. It also dashed hopes of a unifying continental Europe under one crown and led to fragmented nation-states of the medieval era (and beyond).

Q: You begin the book by saying, "Rome has fallen." In 6th century Europe, which powers were the most important, and did any Roman influence still remain?

A: The city of Rome had fallen, but the Roman Empire itself had merely moved east. We now call this the Byzantine Empire or the Eastern Roman Empire, and its new capital was Constantinople. In Europe, though, the dream of Rome had not died. Elites were obsessed with Roman culture, importing classical Roman literature, music, and food, and many kings and warlords hoped to rebuild the Roman Empire in the West.

Francia (or the Frankish kingdoms) was an important European power that encompassed modern-day France, Belgium, the Netherlands, Luxembourg, southern and western Germany, and parts of Switzerland. The Franks also controlled neighboring tributary kingdoms, like that of the Bavarians. Other important powers in continental Europe included the Lombards in Italy and the Visigoths in Spain.

A: I have a book of poetry, Harbinger, coming out in the fall. I’ve also just gotten started with a new nonfiction project, but it’s so new that I don’t want to jinx it yet.

A: The Dark Queens is my nonfiction debut, and I’ve learned a lot not just by writing this book, but also by bringing it out into the world. I’m so grateful to everyone at Bloomsbury but also to all of the bookstore owners, podcasters, book bloggers, reviewers, and readers who are helping to write Brunhild and Fredegund back into the historical record.