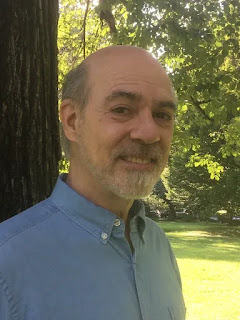 Jason Sommer is the author of the new book Shmuel's Bridge: Following the Tracks to Auschwitz with My Survivor Father. He has written five poetry collections, including Portulans. He lives in St. Louis, Missouri.

Q: What inspired you to write Shmuel's Bridge?

A: I have written poems over the years about my father’s experience and that of other survivors in my family, so in a sense I had been faced toward the material in the memoir for a long time.

But there were also some immediate prompts. My father is 98 and his ability to recall events is very much diminished. Preserving his memories seemed more urgent than ever, especially given the really shocking revelations lately about how few younger people know anything about the Holocaust.

But even more than his memories I wanted a record of our relationship, our interactions over his story and the wider Jewish story that he was swept up in.

Q: How much did you know as you were growing up about your father's experiences during the Holocaust?

A: My earliest memories of the story of my father’s Holocaust involve a kind of presence of story, a sense of the untold—or not fully told—around me. That might manifest in spells of unease around the family—my father wouldn’t sleep well and might be quick to anger.

But, unlike other survivors in my family, he had never been reluctant to speak of his experiences. He spoke to other adults, conversations that might have bouts of English but soon went into Yiddish, or Hungarian, especially if there were children around.

So, he wasn’t specific with me at first; I believe he felt I was too young for what I might hear. I was an early reader, though, and curious. Soon what I had gleaned on my own, too young—at 9 or 10, I think—must have convinced him that he didn’t have to guard his speech so much when I was around.

Q: The Publishers Weekly review of the book says, “Poet Sommer movingly combines a Holocaust memoir with an intimate account of his relationship with his survivor father.” What do you think of that assessment, and how would you describe your relationship? 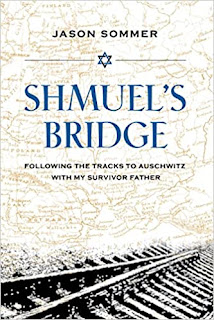 A: I think that’s fair enough. Besides, how can I quarrel with someone who finds my writing moving?

I think the emphasis in the book is, in fact, on the relationship and how his Holocaust narrative shaped that relationship, shaped the family, shaped me as a person. Fathers are important in any case and larger-than-life fathers can seem, well, larger than life, which can complicate matters.

The relationship now, though, is at its simplest and most loving. We have gotten to the essentials, somehow.

Our connection along the way had been complex and sometimes troubled at different periods. There were times I felt I had to keep my distance, to attain my own majority, have my own life. And my life, however it developed, couldn’t be anything but more comfortable than his had been, and there is this terrible richness of event in his.

In some ways his is a representative Jewish experience, as a survivor, a refugee, who overcame so much to achieve so much in America. Inevitably, my life felt smaller beside his. So, there was resistance, and resentment, a sense that I had paid a price, too, for my proximity to his difficult history, to my role in its wake.

Q: The book also includes some of your poetry--what do you see as its role in the memoir?

A: Let’s stipulate that it’s just a few lines before each chapter—I don’t want readers scared off, as some can be, at the mere mention of poetry.

I think of the excerpts from poems as a different music, a different register than the language of the chapters. The quotations from the poems offer a kind of thematic echo, a subtle underscoring of some of the material of the chapter.

A: Since completing Shmuel’s Bridge I have returned to poems. The intense concentration on family, on my parents, in my memoir has unsurprisingly thrown up some further material that seemed to me best explored through poetry. I have just finished one about my father and I am working on another about my late mother.

At the same time, I have just been doing some preliminary writing on some nonfiction pieces exploring the theme of estrangement. I think a great many families have someone gone who chooses to be gone or is chosen for a kind of banishment.

I think it’s a subject, all too common in our experience, that hasn’t had anything like a corresponding attention in writing.

A: I want potential readers to know that the story in Shmuel’s Bridge is a hopeful one, even with the Holocaust background. One bridge is at the center, a very literal one, and then there is the other bridge, the one between my father and me, that, too, is in the midst of the journey we traveled.

What the two of us took on together, what the book makes a record of, results in a deepened connection between a father and son because of history and despite it.