Judy Foreman is the author of the new novel CRISPR'd. It focuses on the gene editing technology CRISPR. A former Boston Globe health columnist, her other books include Exercise Is Medicine. She lives in the Boston area.

Q: What inspired you to write CRISPR’d and how did you create your characters Dr. Saul Kramer and Samantha Fuller?

A: Well, as a journalist, it was easy to model my journalist/heroine on myself. Of course, I made her younger!

As for my evil protagonist, Dr. Kramer, his back story was based on someone I knew well whose family narrowly escaped the Nazis; his doctor persona I made up, not based on any one person. That was easy because, as a health columnist for The Boston Globe, I know many brilliant doctor-scientists in Boston. 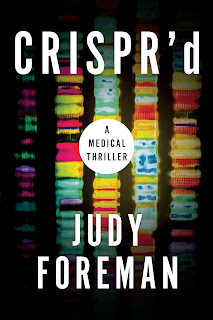 A: Not surprisingly, I love it! That’s exactly what I was trying to do.

A: Both. I knew how the science-y part would end but the outcome of the trial surprised me. It was a really cool creative moment when I realized how the trial would go.

Q: As a science and medical writer, what do you see looking ahead when it comes to gene-editing technology?

A: I see tremendous promise and potential peril as well.

At the moment, I think the general public has not wakened up to the miracle of CRISPR and what it can do to save lives.

I worry that there’s such an anti-science movement in this country that there could be a lot of unnecessary opposition to CRISPR.

At the same time, there is genuine reason for concern in terms of getting ethicists, scientists, lay people and others to agree on protocols to protect embryos from scientific exploitation.

A: Another thriller, but I’ve just started so I don’t want to spill the beans.

A: I’d love to hear what people think of CRISPR’d. It’s available on Amazon and on my website, judyforeman.com.