Brice Particelli is the editor of the new anthology In the Between: 21st Century Short Stories. He is the co-editor of the anthology America Street, and his work has appeared in a variety of publications, including Harper's and Salmagundi. He teaches writing at the University of California, Berkeley.

Q: What inspired you to create In the Between, and how did you choose the collection's title?

A: A lot of the inspiration came from the university students I teach. These stories focus on young protagonists at a moment in their lives when they are becoming who they truly are.

Some of these protagonists are in college or high school, some are in early career or the military, but they are all “In the Between,” struggling to recognize who they are and want to be.

It’s also a book that feels very important right now. This anthology is a collection of diverse, contemporary writers who aren’t afraid to capture complex characters as they navigate our increasingly complicated world.

Q: You write that “these stories don't shy away from the rawness and complexity of people's multifaceted lives.” How did you select the stories and authors to include in the collection, and can you say more about the particular themes you wanted to emphasize?

A: In a lot of ways, these stories help depict what it’s like to live in America during this first part of the 21st century. Each of these 19 stories, from 19 different authors, show people struggling with or embracing who they are.

Because it’s a collection, following characters from across vastly different situations, it offers a diverse picture of who we are today. And none of these authors shy away from difficult conversations—gender identity, racism, abortion, sexuality, love, loss, poverty, gentrification, environmental destruction, and so much more.

While some readers might see those topics as “political,” these stories are simply stories of people existing, thriving, and living their lives. With work by some of the best writers of the 21st century, I hope that this collection will help readers consider all of ways we can be who we want to be in this world. 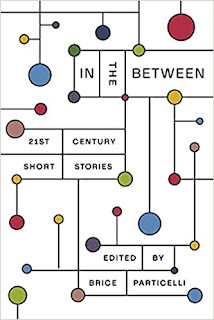 A: I knew from the beginning that I wanted to start with Vanessa Hua’s “Accepted.” It follows a young woman who applies to Stanford University but doesn’t get in, so she lies her way into the dorms, audits classes, joins ROTC, and hopes that she can keep up the lie long enough to reapply and get in.

I love the tension and pressure represented in that story, and it felt like the perfect entry into this anthology. In the Between includes famous writers as well as emerging talent, speculative fiction as well as comics, and deep drama as well as comedy, and Hua’s story helps set the stage for what’s to come.

While it can be difficult to decide on order for an anthology, the central struggle in these stories is so deeply relevant to everyone’s lives that the rest of the order was simply a choice of pacing. They are all brilliant.

A: What connects these stories is a sense of seeking self—sometimes through joy, sometimes adversity, and sometimes amidst the chaos of other people’s actions. That kind of seeking is something we all do, constantly.

What I love about so many of these stories is that they embrace their protagonists’ multiplicity of identity (their intersectional identities, as academics sometimes put it). Together, they represent a future that is being written—one where we can do many things, be many things, and embrace our own complex identities.

A: I’m working on a nonfiction book that focuses on misinformation communities. My Ph.D. is in Education and I’ve been fascinated by the way that we increasingly find ourselves in cultural and informational bubbles.

In the Between is one way to address that—by making the lived experiences of others more accessible and relatable—and this new project comes at it from a different angle.

It explores the structures and impulses that push us away from each other, focusing on communities that sell bad information to reshape the world in their singular image. It explores the stories of some of the people at the heart of these movements as I try to make sense of why we trust what we trust, and whose stories are we willing to hear.

A: I gave a sneak peek of some of the stories from In the Between to my students at U.C. Berkeley this year. They loved them.

Their reaction also showed the power of an anthology. It led many of them to explore these authors’ other works. I love that about anthologies. They allow you to see a bit of what some of the best writers are doing today, and it opens the door to so much more.