Karen Brooks is the author of the new novel The Good Wife of Bath, featuring a character inspired by Chaucer's Wife of Bath from The Canterbury Tales. Brooks's other novels include The Brewer's Tale. Also an academic and newspaper columnist, she is based in Hobart, Tasmania, Australia.

Q: You wrote about your character Alyson in an earlier novel, The Brewer's Tale. Why did you return to her?

A: When I wrote Alyson into The Brewer’s Tale/The Lady Brewer of London, it was at a point in the novel (about halfway) where the lead character joins some pilgrims returning to London after a trip to Canterbury. It’s there she meets Alyson.

In my mind, Alyson was always Chaucer’s Wife of Bath, but beyond the limits of his poem - as a woman of middle age (late 40s-early 50s). I imagined what the woman he presented might have become afterwards.

Alyson was never meant to be a significant character in Brewer's, just a gesture to one of my favourite pieces of literature and a bit of a homage to Chaucer. Problem was, the moment I wrote her in, she because really important to the story - as if she was saying, “hey, lady. I am not a minor character - I am worth more of your time and effort than that!”

I fell in love with her and by the time I finished that novel (and Alyson is so important to the trajectory of the novel and the lead character’s journey - in fact, when they meet each other on that pilgrimage it’s life-changing for both of them), I knew I would go back and write her story one day - I even mentioned that in the Author’s Notes.

It only took me eight years to get there. But I was always curious about who she was (beyond Chaucer’s portrait); what kind of girl and later, woman she became. What events (apart from marriages) shaped her and influenced her. And she’d also captured my heart. I had no choice but to write her.

Q: What did you see as the right blend between Chaucer's character and your own Alyson--and what role do you see Chaucer himself playing in your novel?

A: Ah… the right blend. I just hope like hell I did get it right, but that’s for readers to decide! I tried very hard to strike a balance.

I stayed as true to Chaucer’s portrait - which presents the wife as bold, sassy, loud-mouthed and, in some eyes, exhibiting every negative trait of womanhood there is or, alternately, being a proto-feminist - as I could.

I follow the path he carved for her in terms of marriages, business success and failure, physicality, the relationships he does mention, the getting of both education and wisdom (because she’s clearly a very clever person who doesn’t suffer fools).

But she’s also loyal and swayed by her bodily desires and heart. In other words, totally human and flawed.

So I wanted to explore all this (and more) within an authentic medieval setting. Imagine what life for a woman like her would have been lime at that time. Give the Wife a life beyond her tale and prologue in The Canterbury Tales. 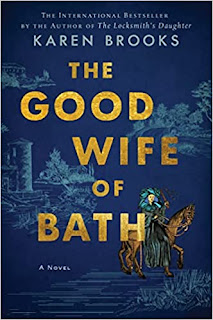 As for Chaucer, well, in The Canterbury Tales, he speaks for the Wife, he highjacks her tale for entertainment purposes and maybe as a cautionary tale for listeners (don’t be like HER, ladies! Or men, you want to steer clear of a woman like that!), but I also sense he respects a woman who speaks her mind and insisted on being heard - after all, he gives her much to say.

In the book, his story is told by the Wife - it’s a reversal of the poem  - and we see him through her eyes. He’s a secondary character but important nonetheless. I ended up really loving him too!

Q: In your Author's Note, you write, "To some scholars and readers, Alyson, the Wife of Bath, is a proto-feminist, railing against medieval strictures and the patriarchal society that governed women's behavior and blamed them for all ills." Do you see her that way?

A: Yes and no. She was by no means the only woman doing that. Revisionist history and the reclaiming of women’s stories show many women did in various ways - even those who did gain a “voice” in those times.

So she wasn’t alone protesting the social, religious and gendered conditions that saw women very much as subordinate and powerless objects - only granted subjectivity through men.

Autonomy was very rare and they were blamed for everything that went wrong, including men’s poor choices, their violence and so much more. Women were equipped with every sin.

But she’s also pragmatic and, like almost all women of that time (and every other one since), worked and struggled within the limitations and rules that restricted them to gain whatever power they could. Power comes in different guises and for women of that era, small gains counted for a great deal. They still do...

A: I spent years researching it (as I do all my novels) reading history books, journals, the literature of the era, listening to the music, studying the art and philosophical and religious texts. I use the work of many, many erudite scholars and read other marvelous fiction works set in the period.

I also watch documentaries, listen to lectures by history professors online, and watch some movies proclaiming to be of the era… many aren’t at all accurate (looking at you, A Knight’s Tale), but they’re still damn fun!

I also pore over maps and locate myself in situ best I can. Of course, when travel was readily available, I did go to Bath and London and was even fortunate enough to visit many of the pilgrimage places the Wife travels to.

In regards to that, I think that was one of the many surprising things I learned (and I learned many!).

Basically, medieval pilgrimages were not only as much secular adventures as they were spiritual (and people of all classes and wealth undertook them - they could simply say I’m off on a pilgrimage to (insert holy site), and who was going to protest?) and marked the beginning of modern tourism, but souvenirs, especially sexual kind of ones, were sold at most shrines.

Little badges and ampullae were sold not only claiming to contain saints’ blood and Christ’s bones, foreskin etc., but were shaped like men and women’s private parts! People would proudly attach these to their cloaks and hats! Even churches in some places were adorned with phallic and other kind of quite explicit sexual sculptures. That was really surprising!!!

A: I have just finished a novel set at the end of Charles II’s reign - 1679 - 1689 - so the late Restoration (about 20 years after The Chocolate Maker’s Wife). It's set in the theatre which was enjoying such a renaissance and women were able to tread the boards with all the positive and negative associations that aroused.

It was also a time of great social upheaval and so much religious discord, executions, bigotry, and fear, and plots and plans to rid the king abounded, as did  the spread of false information and propaganda. It was an incredible time. Scary, exhilarating, and utterly fascinating.

A: I don’t think so… just a big shout out to you, Deborah, my readers, and the bookshops, librarians, bookstagrammers, and book bloggers who do so much to support books and reading. Thank you. Thank you.