Karen Joy Fowler is the author of the new novel Booth. It focuses on John Wilkes Booth and his family. Fowler's other books include The Jane Austen Book Club. She lives in Santa Cruz, California.

Q: You write that the inspiration for Booth came in part from thinking about the families of today's mass shooters. Why did you decide to write about John Wilkes Booth and his family?

A: I’d been thinking about the Booths in other contexts for quite a while – I’d already written two short stories in which they appear. (While working on the book, I would write one more.)

So when I began to focus on the families of shooters, it was natural to think of them again. John Wilkes Booth is the most famous shooter in American history and he had a large family. I hadn’t asked myself what the assassination meant to them before. Now I did.

Q: Why did you decide on Booth’s siblings Rosalie, Edwin, and Asia as the point of view characters in the novel?

A: These decisions were mostly practical. I knew I didn’t want John as a point of view character.

Of the five remaining brothers and sisters, Edwin and Asia were the ones about whom there was the most information. Numerous letters survive from and to both. Asia wrote three books. I could get a good sense of their voices and personalities.

But I needed a third voice, someone to tell the story of the family in the years before Edwin and Asia were born. I decided on Rosalie, the oldest girl. I knew the things that had happened to and around her, but have little sense of who she was. I had to mostly make her up.

Q: In the Author's Note, you write, “The more I read of Lincoln's warnings concerning the tyrant and the mob, the more I immersed myself in the years that led to the Civil War, the more brightly lit the road from there to here became.” Can you say more about the similarities you see in the pre-Civil War period and today? 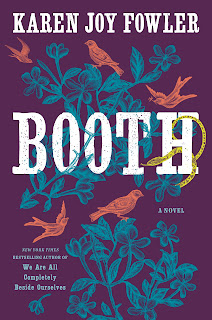 A: I grew up during the civil rights movement. As a girl, I watched on television the ugly displays of racist police and their hoses and dogs. I remember vividly how we waited to learn if [civil rights workers] Chaney, Goodman, and Schwerner were alive. I remember how one Black leader after another was assassinated, along with the Kennedys.

And in spite of all that, I find myself shocked now by the open racism now freely expressed by elected officials. Nazi demonstrations. An insurrection at the Capitol in which the flag of the Confederacy was carried through the halls.

We have never dealt honestly and fairly with the issue of race and state governments throughout the county are taking steps and passing laws to make sure that we don’t.

The partisan divide has become so wide that people on the other side are now regarded not as opponents but as mortal enemies. Violence and the threat of violence are tools being used for political ends; there are terrorists in our cities and our neighborhoods demanding we call them patriots.

Racism is at the heart of all of it. There is a portion of the populations that will never accept the legitimacy of Black political power. All of this is embedded in our history and, as Abraham Lincoln warned us, there is no escaping it.

Q: How would you describe John Wilkes Booth's legacy today? And what about his family's legacy?

A: I’m afraid his family’s legacy has been largely subsumed by Lincoln’s assassination.

Though the New York City Players’ Club founded by Edwin is ongoing. The statue of Shakespeare he championed is still in Central Park and there is a Booth theater near Times Square. His ghost has been seen in Columbus, Georgia. And numerous websites and foundations are devoted to this fascinating family.

John Wilkes’ legacy is all about the what-ifs. The man who became president when Abraham Lincoln was killed had been a slave owner. He had no interest in protecting the rights of the newly freed in the South and opposed the 14th amendment.

In some transfigured way, John got what he wanted – an avenged South, a population whose defeat fueled a sense of grievance that lasts to this day.

Trying to imagine the aftermath of the war if Lincoln had remained in the presidency is frankly impossible. But whatever it might have been, John prevented it. Though it’s my personal belief that if John hadn’t killed Lincoln someone else would have.

A: I have some starts and stops, but nothing substantial and, at this moment, no idea of where I’ll go next.