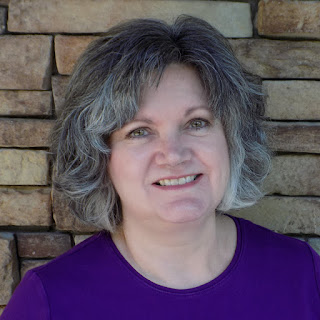 Joyce St. Anthony is the author of the new mystery novel Front Page Murder. She also has written the Brewing Trouble mysteries. She lives in Pennsylvania.

Q: What inspired you to write Front Page Murder, and how did you create your character Irene?

A: I've loved the WWII era since listening to my mother play her Big Band records. I love everything about the ‘40s--the music, the clothes, the hairstyles--you name it. I knew I wanted to write something set then for a long time. I'm not really sure how I created Irene. She just kind of materialized.

Q: The novel is set during World War II in a small town in Pennsylvania. Did you need to do much research to write the book, and how important is setting to you in your writing?

A: I'm constantly researching. I'm not a historian, so I had to do a lot of research. I wanted the book to be as authentic as possible without overwhelming readers with info dumps. It helped that Irene is a reporter--she'd naturally be reporting the news of the day.

One thing I almost forgot to look up was the weather. I only realized it when I had finished the first draft of the book. The town is fictional, but it's located near Pittsburgh so I had to look up what the weather would have been for the days in the book.

Setting is very important--in some cases, it's almost like another character. Where the story is set influences the plot. Different settings have different "feels." The same story set in a vibrant town instead of a grimy slum will not feel the same to the reader.

A: I had a general synopsis before I wrote because I needed it for my agent to send out the proposal. While the basic plot remained close, I made a lot of changes. 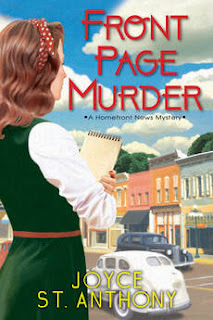 Q: The writer Alyssa Maxwell said of the book, "Wartime intrigue, small town charm, and a savvy sleuth who's not afraid to take charge, no matter what the men around her think, make this a highly entertaining and exciting series debut!" What do you think the novel says about women's roles during World War II, and in journalism particularly?

A: I seem to have a thing (unintentional!) about my protagonists working in fields traditionally held by men. My main character in my Brewing Trouble series was a brewmaster, and now Irene is in charge of a newspaper.

There were women in the workforce many years before WWII. I always think of the arsenal explosion that occurred in Pittsburgh in 1862. Almost all the victims were women and children making ammunition for the Union in the Civil War.

I think WWII really brought it to the forefront. The men were overseas fighting and the women were on their own. Whether it was farming or working in a factory, women needed to work. Someone had to keep the farms and factories running.

Many women realized they liked the work, and especially liked the paychecks. A lot of them weren't prepared to lose their jobs after the war. Some people think the feminist movement was born in the 1960s but it really began much earlier with the suffragettes campaigning for the right to vote, and then the Rosie the Riveters.

A: I just turned in edits on the second book in the series, Death on a Deadline. It will be released in November. I won't know if the publisher wants a third book until we see how Front Page Murder sells.

In the meantime, I have several proposals for other series I started before this one, and I'll probably circle back and see which one I want my agent to submit. They're all contemporary so it'll be weird to be back in the present instead of 1942.

A: I can't think of anything else, other than I'd be really grateful if everyone would buy Front Page Murder, or request it from your library. I'd really like to write more of Irene's adventures and that will only happen if people want to read them.