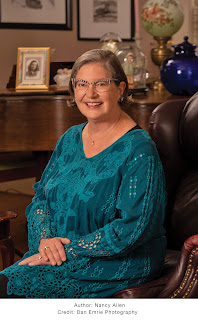 Nancy Allen is the author of the new novel Renegade, the first in her Anonymous Justice series. Her other books include the Ozarks Mystery series, and she is the co-author of two novels with James Patterson, Juror #3 and Jailhouse Lawyer. She is a lawyer and served as assistant Missouri attorney general.

Q: What inspired you to write Renegade, and how did you create your character Kate Stone?

A: I had some help with the inspiration for Renegade. I’m a lawyer and former prosecutor, and I write legal thrillers.

Assemble Media, an entertainment production company, asked me to write a thriller about an assistant D.A. in New York who joins a circle of mavericks to mete out justice when the courts fail.

I jumped on it; I knew I could create this story. I understand how even those involved in the criminal justice system can become disillusioned with it. But I also wanted to show the danger inherent in taking the law into our own hands.

My protagonist, Kate, took immediate shape in my head; she was tremendous fun to write. I tried to create a character whose quirks and flaws are balanced by her nobler traits. She’s a woman who’s not afraid to fight the good fight, though she may choose an unconventional path. And she’s a passionate advocate for women who are victimized.

A: We all know there are two kinds of writers: pantsers and outliners. I’ve done it both ways. When I wrote my Ozarks Mystery Series, starring prosecutor Elsie Arnold, I was a steadfast pantser, and let the story spin out organically.

Working with James Patterson in recent years, I’ve learned the merits of outlining a novel first. With an outline in place, you avoid the dreaded writer’s block, and the path to the finish is much smoother.

Writing Renegade, I combined the two methods. The beginning of the book was clear to me, and I outlined chapters to take me through the first half. After that, the scenes and the storyline took shape in my mind as I wrote.

When I started the book, I didn’t know how it would end. It’s kinda scary, embarking on that journey without knowing where you’ll end up. But when the vision finally appears, it’s a glorious experience.

Q: How does your background as an attorney and law professor factor into your fiction? 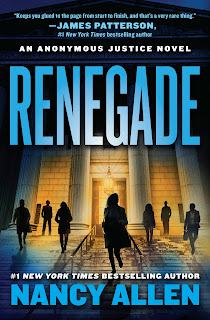 A: I practiced law for 15 years, as an assistant prosecutor and assistant Missouri Attorney General. Working in that capacity gave me a tremendous amount of trial experience.

I tried more than 30 jury trials, countless court trials, argued appeals before the appellate courts of Missouri. I’m intimately acquainted with the courtroom experience, and I use that knowledge in my novels.

And while teaching law for many years, I learned how to explain the law and legal proceedings in a way that non-lawyers can understand.

Most of my legal thrillers end with a trial. In Renegade, the book begins with one. Kate loses a jury trial, a felony assault case against a serial abuser of women. The verdict in that case initiates the action.

Q: The book is set in the New York City area--how important is setting to you in your writing?

A: A sense of place is always key to my story. I’m an Ozarks native, and the hillbilly setting is an important element in my Ozarks thrillers. And the books I’ve co-authored with Patterson take place in the South, a region that’s just a stone’s throw from here, and similar to my area in many respects.

Renegade is set in New York City—admittedly, that’s a long way from home. But it has long been my favorite city; I’ve had a love affair with New York for half a century.

I had my first taste of Manhattan as a teenager, on a school trip. We spent a week at a dodgy hotel on 8th Avenue and 42nd Street. The year was 1972—I don’t have to tell you what the neighborhood was like back then. But it was the theater district, and I thought I’d found paradise.

I’ve returned to the city at every opportunity over the past 50 years, and my daughter is there, an Ozarker transplanted to Morningside Heights. Writing a book set in New York was a treat.

Q: This is the first in a series--can you talk about what's coming up next?

A: Kate’s first story comes to a resolution at the end of Book 1. But once you’ve met her, you’ll understand that she has many issues to battle, personally and professionally.

Also, there’s more jeopardy to come for her friends and foes in the band of outlaws. And some of the other players in the circle merit a storyline of their own. I’m excited to see where this leads.

A: Fun fact! John Goodman was the BMOC of the theater department at Missouri State University when I was a freshman. We were in a show together: The Threepenny Opera. He played Mac the Knife. I was cast as Betty the Whore. We kissed onstage every night.

He supports the university (as do I), and recently returned for an appearance. We met. I asked whether he remembered our scene together. He assured me that he did not, that it was not memorable. Looking back, it was for the best that I changed my major from Theater to English, and went on to law school.