Ayesha Harruna Attah is the author of the young adult novel The Deep Blue Between. Her other books include the novel The Hundred Wells of Salaga. Born in Ghana, she lives in Senegal.

Q: What inspired you to write The Deep Blue Between?

A: After I wrote my third novel, The Hundred Wells of Salaga, about my enslaved great-great grandmother, two of her siblings, twin girls, stayed with me and wouldn’t let go.

When I met the editor of Pushkin Children’s, Sarah Odedina, at the Pagya!, a literary festival in Ghana, she asked if I had considered writing for children. I knew instantly that the girls would have their story told, and very quickly The Deep Blue Between came into being.

A: I had already done lots of research on 19th century West Africa for my third novel, so I used that as a springboard and from there and went on to Brazil. 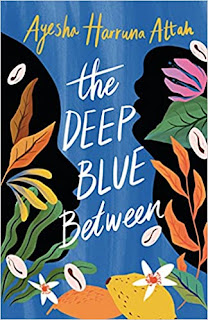 Q: How would you describe the dynamic between your twin characters Hassana and Husseina?

A: Hassana and Husseina love each other dearly. As children, Hassana is the more outgoing sister and mostly overshadows her younger twin. While they pursue the different paths they are forced to take, Hassana retreats into herself, while Husseina reluctantly becomes a person who is seen and heard.

They also have a dynamic of call and respond. One twin is supposed to call and the other is supposed to heed the call. That changes as they go from little girls to younger women.

Q: This is your first young adult novel--why did you decide to write for this group with this book?

A: Hassana and Husseina are 9-year-olds when the novel begins and we go along with them on a journey that spans most of their teenage years. That journey, for me, fit right in with the young adult category. I didn’t set out to write a young adult book; I just wanted to tell the twins’ journey.

A: I am dreaming up my new novel. I have a rough idea of who the characters are, but their story is not clear to me yet. Sometimes, I just have to begin writing, sometimes I have to create a plan. I’m still in limbo!

A: Thank you so much for the interview!