Sara Rauch is the author of the new book XO. She also has written the story collection What Shines from It, and her work has appeared in a variety of publications, including Paranoid Tree and Autofocus. She lives in Massachusetts.

Q: What inspired you to write XO?

A: Great question, though I’m not quite sure how to answer it!

On the surface, the book was “inspired” by its main narrative thread, which was a love affair I had with a married man, while I myself was in a long-term, committed relationship with a woman.

I never wanted to write a straightforward memoir about the experience, because that felt a bit too flat for me, and originally, I’d conceived of the book as a collection of essays, non-linear, overlapping but distinct. But the book had other ideas!

As I pushed into this long-form telling, I started to see that there was no thread I was writing that was not connected to at least a handful of other threads in my life and in life at large.

An affair—and the resultant secrets and heartbreak—can feel very insular, but the truth is, it was always part of a much bigger picture, spiritually, socially, culturally, and cosmically. I wanted to portray a holistic, relational view of this experience, so I guess I’d say that’s what inspired me.

A: I have a couple different answers to this one. It might be said that this book started writing itself well before I had any awareness of its intentions.

I trained as a poet before I switched to prose, so titles have a lot of weight for me—I often come up with a piece’s title before I start a piece, and more often than not, that title sticks. 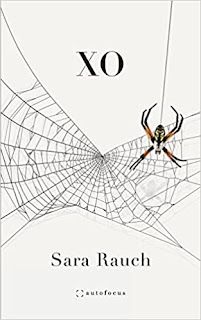 For XO, I’d written an essay connecting the seemingly innocent email signature that arose during a love affair and the Xs and Os that populate maps. That essay later became a sort of base for the book, both thematically and for chapter titles (several chapters are titled “XO” or some variation thereof).

Lastly, something I became aware of only while working on final edits, the book as a whole is a sort of “signing off,” a goodbye to many paths I might have taken and did not.

A: Something I often tell my students is “writing is not therapy, but it can be therapeutic” and by this I mean, writing—especially autobiographical writing—that seeks to become art has to transcend mere processing and elevate itself to a full artistic experience.

To say that writing XO didn’t “heal” me in some way would be a lie, but I didn’t write the book to heal. The bulk of the healing work, in regards to the affair, had been done when I sat down to “start” writing in June of 2020.

This moment, of committing to the book, came directly on the heels of two big events in my life: my eldest cat dying and my getting sober. With a bit of retrospect, I have a sense that without those two events, I might not have written the book.

And in some strange ways, writing the book helped me work through the grief of losing my cat and the difficulties of giving up drinking. Writing XO has, if nothing else, hammered home the wisdom of taking life “one day at a time.”

Q: Author Marin Sardy said of the book, “Something between a memoir and a meditation, this is less a straightforward narrative than a trace along the crooked whorl of self-discovery, as Rauch is shaped, reshaped, and perhaps at times misshapen by her deepest musings and most vulnerable moments of being.” What do you think of that description?

A: Marin’s description captures XO’s abiding aesthetic perfectly! I wanted the book to possess motion and stillness, weaving together action and emotion in unexpected ways—above all, I wanted the book to honor experience: the wonder and terror inherent in the mystery of being human.

A: Currently I’m in the generation stage of a new book, which I’ve somewhat jokingly dubbed “part autofiction, part time travel.” It’s a love story, a historical investigation, an exploration of the many forms absence takes, a coming-of-age narrative. Is it a novel? Maybe.

But something else that was freeing about writing XO was giving myself permission to defy genre. The book will figure itself out: I trust that now in a way I didn’t before.