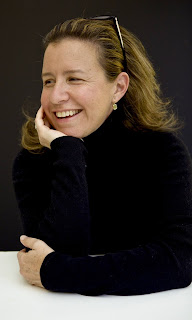 Claudia Kalb is the author of the new book Spark: How Genius Ignites, from Child Prodigies to Late Bloomers. She also has written the book Andy Warhol Was a Hoarder, and her work has appeared in a variety of publications, including National Geographic and Smithsonian. She lives in Alexandria, Virginia.

Q: What inspired you to write Spark, and how did you choose the people you profile in the book?

A: I have always been fascinated by how people discover what they’re meant to be, and one question in particular has intrigued me: what propels some individuals to reach extraordinary heights in the earliest years of life while others discover their passions decades later?

While researching my first book, Andy Warhol Was a Hoarder: Inside the Minds of History’s Great Personalities, I discovered how much I enjoy studying the lives of well-known figures as way to understand human behavior. I knew I wanted to take a similar approach in Spark.

I started by creating lists of people who fell into three main categories: prodigies, midlifers and late bloomers. My goal was to find individuals whose moments of discovery happened in different ways and in a mix of professions.

Some of the choices were easy: I had written about Picasso for National Geographic and wanted to expand on my reporting.

Shirley Temple was a natural because of how young she was when her acting career ignited, but I picked her for a different reason: as an adult, she cultivated an entirely new profession as a diplomat.

I chose Julia Child in part because I loved the way she described the moment she discovered French cooking—the aromas of buttery shallots and fresh lemon—and I wanted to write about Eleanor Roosevelt because I found her resilience and inner strength so captivating. Each person drew me in for a different reason.

Q: You note that you organized the book "not by birth order, but by the age at which genius ignites." Why did you decide on this strategy?

A: I wanted the book to move chronologically from one person’s moment of inspiration to the next, starting with prodigies and ending with late bloomers. This made sense to me for many reasons.

For one thing, I liked the idea of following the natural arc of life, from early childhood to the final years. It also allowed me to build on research about life stages in a logical order.

In the prodigies section, I write about the influence of parents on early development; in midlifers, I explore the power of experience. Maya Angelou’s first memoir, published the year she turned 41, could not have been written earlier—she had to live it first.

By the time I get to late bloomers, I’m able to delve into research focused on the aging brain and creativity, and the importance of purpose toward the end of life.

Late bloomers Peter Mark Roget and Anna Mary Robertson Moses (Grandma Moses) are perfect examples: Roget turned to his thesaurus in his 70s after an esteemed career in science and medicine; Moses wanted to keep busy, and painting became her way to do it. She launched her career at the age of 80. 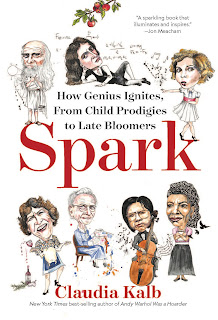 A: I read dozens of books and journal articles and interviewed researchers to learn about the science of creativity, inspiration, aha moments, resilience, failure, collaboration, and many other elements that contribute to success.

To learn about the individuals, I read biographies, autobiographies, news articles, magazine features, journals, and letters.

I met Yo-Yo Ma, heard him perform, and watched him display his characteristic exuberance during a visit to Pittsfield, Massachusetts, one of the stops on his global Bach Project journey.

I interviewed Bill Gates and met Sara Blakely after she captivated a room full of entrepreneurs at the “How I Built This Summit” in San Francisco.

Thankfully, I did much of my reporting before the pandemic, allowing me to visit Isaac Newton’s bedroom at Woolsthorpe Manor in the English countryside, where he did much of his critical thinking during the plague.

I toured Fleming’s lab in London and walked along Roosevelt’s favorite path in the woods at Val-Kill, her home in Hyde Park, NY. I even went to a cooking class so I could learn how to make Julia Child’s famous beef bourguignon.

So many surprising things came to light: Julia’s husband, Paul, used to stick the stickers from his breakfast bananas on the underside of their kitchen table, which you can visit at the Smithsonian; 10-year-old Shirley Temple aimed her slingshot at Eleanor Roosevelt and hit her in the backside with a pebble during a cookout at Val-Kill; Angelou’s writing accouterments included a deck of playing cards, Roget’s Thesaurus, and the King James Bible.

Newton investigated the universe and Sara Blakely contemplated her place in it. I could go on and on.

Q: You write, "My own spark—the moment my curiosity erupted and the questions began to cascade—rests with Leonardo da Vinci, the Renaissance man who embodied genius in the voracious way he puzzled out the world." Can you say more about that, and about why you chose to conclude the book with Leonardo?

A: In the summer of 2017, I attended a remarkable conference about Leonardo at the Aspen Institute and became increasingly fascinated by the artist’s hunger for knowledge and the vast expanse of his mind.

In Leonardo, all the elements of genius come together: intellect, artistic talent, curiosity, perseverance, the leaping of disciplines, and even luck (he was born during the Renaissance!).

As I thought about the book, it became clear to me that Leonardo was the backbone of the story—the genius who sparked throughout his life. I knew he didn’t fit into the arc of discovery but served instead as model for others.

Concluding with Leonardo allowed me to write about the characteristics he displayed that are reflected in the lives of those I profile: a passion for investigation, observation, pushing past convention, breaking barriers, and asking questions.

A: One of the most meaningful lessons I learned is that even though periods of contemplation and exploration may feel directionless—even squandered—they are actually fruitful, and often critical to discovery. Sometimes, we need to get lost to find our compass.

Julia Child documented this stage in her life after she graduated from college in 1934. “When I was in school and later, I felt I had particular and unique spiritual gifts. That I was meant for something, and was like no one else. It hadn’t come out yet, but it was there, warm and latent,” she wrote in her diary just before her 28th birthday. “Today, it has gone out and I am sadly an ordinary person.” Eight years later, she finally found her passion at a restaurant in Rouen, France.

Researching the lives in Spark helped me appreciate my own meandering, before I got my first full-fledged job in journalism at the age of 30. I now know, more than ever, that those years were not only useful, they also made me a better reporter and writer.

Q: How have people reacted to Spark?

A: There is nothing better than hearing from happy readers. I’ve received wonderful feedback, especially from midlifers who say the book gives them hope about the years to come.

Too often, society and the media focus on the achievements of people under 30 or 40, leaving everyone else feeling obsolete. The midlifers and late bloomers I profile in Spark make clear that there’s no expiration date on creativity, accomplishment, and fulfillment. This is a message that many readers find most inspiring. That gives me great joy.

--Interview with Deborah Kalb (proud cousin of Claudia!). Here's a previous version of this Q&A. Claudia will be participating in the Temple Sinai Authors' Roundtable on March 26, 2022.