Dennis Duncan is the author of the new book Index, A History of the: A Bookish Adventure from Medieval Manuscripts to the Digital Age. He also is the coeditor of Book Parts, and his work has appeared in a variety of publications, including The Guardian and the Times Literary Supplement. He lives in London.

Q: Why did you decide to write this history of the index?

A: Quite simply because I thought it needed to be done. But it came about through a slightly odd route.

I had been writing an academic article about this funny group of French avant-garde writers called the Oulipo. One of the unusual things about their work is that several of the novels that have been produced by their members have got indexes. Which is something that novels don’t usually have.

So I wanted to find out when did that distinction - that novels don’t have indexes - come into being, and I asked all of my colleagues, “Where should I look? What’s the standard history of the book index?” And the answer kept coming back that they didn’t know, or there wasn’t one.

So my book really came about because I thought, “Well, someone needs to do that.” But it does tickle me that this rather dry topic - the history of the index - came about through thinking about these really very zany French novelists.

A: Well, I was very lucky in that I was given a fellowship from the Bodleian library in Oxford - and subsequently the University Library in Cambridge - which came with an office, and really gave me free rein to look at all their incredible collections of manuscripts and early printed books.

The other wonderful thing about working in a big research library is the conversations you get into with other researchers.

An awful lot of the stories in my book come from conversations in the cafe where people have said, “Oh, a history of the index? Well, presumably you’ve already included such-and-such,” and this has sent me away to find some old book or detail that I hadn’t encountered before.

It really can’t be overstated how much collaboration - both formal and informal - goes into any piece of work like this.

As for surprises, the biggest one was that the project would be of interest to a mainstream publisher! Don’t get me wrong, I am very proud of the book. But it has been such a delight to hear that all sorts of people have enjoyed it, not just academics. I honestly could not have predicted that when I started writing it! 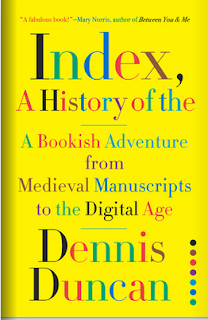 Q: In her New York Times review of the book, Jennifer Szalai writes, "The straightforward utility of the index turns out to be what made it such a disruptive innovation in the first place." Can you say more about that, and why the index was so disruptive?

A: The index breaks a book up into discrete units of information. You don’t have to read in a linear way, from start to finish; the index will just allow you to raid the book for the morsel you’re looking for.

To borrow a term from modern computing, it means that a book now becomes a “random access” storage device. And this brings about an incredible shift in the relationship between time and information: suddenly you can find what you’re looking for really quickly.

But it also produces an anxiety that people won’t read books from start to finish any more. (A bit like what happens to albums when music streaming comes along!)

Q: How do you think indexes might change in the future?

A: In my book, I’ve included two indexes: one produced by modern index-generating software; the other compiled by a professional indexer called Paula Clarke Bain. And I think it’s plain to see that Paula’s is a million times better than the automatically-generated one.

Paula’s is intelligent, useful; it imagines the phrases you might want to look up, what words you might use. But also it is also full of Paula’s personality, full of jokes and wordplay. It is something that is genuinely a pleasure to read in its own right.

That software is funny today, but it is only going to get better. But I don’t think it will be able to replicate the wit and character of an index like Paula’s. So I hope there will be always be a role for the artisanal index!

A: I’m just in the very first stages of planning out a new book on literary eccentricity: writers who didn’t fit the mold of what was fashionable during their time, but kept on writing anyway.

Like the wonderful William McGonagall, who often gets referred to as “the worst poet in the English language.” If you haven’t come across his poetry before, do look it up. There’s something joyous in just how bad it is. I’m fascinated by his urge to keep producing this work in the face of universal derision.

A: Wednesday 30 March is National Indexing Day. If any readers are interested in what it takes to compile an index, or indeed how to make a career out of it, head to the hashtag #IndexDay and you will find plenty of friendly professionals who will be happy to help.