Michele Wucker is the author of the new book The Gray Rhino: How to Recognize and Act on the Obvious Dangers We Ignore. She also has written Lockout and Why the Cocks Fight. She was the president of the World Policy Institute, vice president of studies at the Chicago Council on Global Affairs, and Latin American bureau chief for International Financing Review. She lives in Chicago.

Q: You define a Gray Rhino as “a highly probable, high-impact threat: something we ought to see coming, like a two-ton rhinoceros aiming its horn in our direction and preparing to charge.” How did you come up with the concept for this book?

A: It started out with a question—what makes the difference between the people who see a problem coming and do something, and others who don’t.

[I looked at] the Argentine debt crisis and the Greek debt crisis. When Argentina was in a debt spiral, I was a financial journalist. I wrote about a proposal for Argentina to write down a third of what it owed…nothing happened to that proposal, and nine months later, Argentina defaulted, and investors lost 70 percent instead of 30 percent.

Ten years later you have Greece. The numbers were similar, debt was up, GDP and reserves were down, the same dynamic was in play. I wrote a paper for the New America Foundation bringing up the Argentina example, saying Greece was an opportunity to learn from that mistake.

When I published about the Argentina proposal, bankers called me and said, This needs to happen. I needed to ask the question why Greece ended up being able to restructure and Argentina didn’t. I was looking for a way to describe it that was accessible.

The image I came up with was a big rhino…I didn’t know anything about rhinos! [I learned that] white rhinos are not white, and black rhinos are not black. They’re all gray. It’s obvious, but you don’t realize it because you’re going off in the wrong direction. 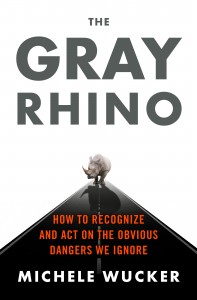 Q: How does the Gray Rhino differ from the Elephant in the Room and the Black Swan?

A: The Elephant in the Room is much more static. It just stands there. People assume we’re not going to do anything about it. We needed something more dynamic that upped the ante and recognized that we have a choice.

[The Gray Rhino] is easier to prepare for—it’s more efficient to focus on things you know about. People didn’t take into consideration enough how bad we are at dealing with what’s in front of us.

Q: What would you say are some of the most damaging Gray Rhinos in recent years?

A: There are [large] examples like the 2008 crisis or climate change, but it can also apply to corporate decisions. Kodak invented a digital camera but [thought] it would cannibalize their existing business. They failed to realize the existing business was [becoming] obsolete…

It can be an industry, a company, something on a personal level. A president not wanting to give up cheeseburgers, until he had two [medical] procedures. 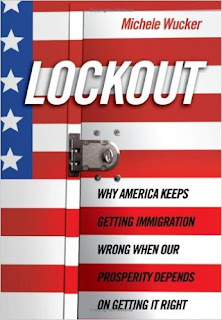 Q: Why do leaders tend to miss these phenomena, and what can they do to improve their record?

A: Leaders are people too, and it is a very human trait. Some of our inclination to deny what’s in front of us is a defense mechanism.

A lot of the way we look at the world is colored by cognitive biases that lead us to see things in a more rosy light than they are. You get group dynamics when multiple people are not wanting to see what’s in front of them, and reaffirming what others say.

There also are structural obstacles, short-term political cycles versus long-term political problems. With budgets, we’re not as good at accounting for what we can save.

Some people take advantage of the fact that humans are prone to deny what we don’t want to hear, [such as] the tobacco companies…people can manufacture denial, and certain entrenched interests can play on our vulnerabilities.

We are not as aware as we could be of the way our biases get in the way, and we feel helpless in the face of the size of the obstacles. Through history, you’ve seen movements [toward change, but] if you assume you’re not able to overcome, you won’t do anything. 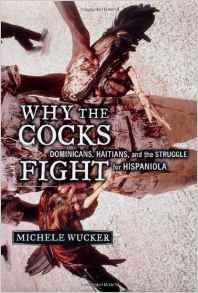 Q: What are some ways people can improve when it comes to Gray Rhinos?

A: The process, in personal life and in companies, of identifying Gray Rhinos, analyzing opportunities, setting goals and progress against them is a helpful exercise to get started. It’s helpful for us to focus on the need to be more aware of Gray Rhinos.

After The Black Swan came out, you couldn’t have a conversation without people mentioning it. What if there were a shift to something right in front of you, and similarly not being dealt with? To focus on it is an important first step. It’s still not easy, but if you don’t take [the step, it will be harder].

Q: What might be a good, perhaps easier, one to start with?

A: By definition none is super-easy, but one I like is water scarcity. How fast the population is growing, droughts, climate change, predictions things are getting worse—we are inefficient at using water.

There are steps that could be done by companies to improve efficiency, and by individuals—with every person making small changes, it adds up. You can look at policy intervention—you need individuals, companies, civic sector organizations, and policy all working together to allocate water more efficiently.

A: There are a lot of things I wanted to go into more depth with in the book, but then I never would have finished it! I look at the book as the beginning of a conversation.

I’m just back from workshops in Phoenix and San Francisco. Organizations are looking at applying the Gray Rhino to their businesses.

To me, a measure of success of the book will be how many people embrace the Gray Rhino and make it their own. Expanding the conversation, going into depth in things I couldn’t fit into the book—I will be writing about the Gray Rhino [for a long time]!